Share
Facebook
Twitter
Pinterest
ReddIt
Email
A quick trip to IMDb.com will get you a whopping 308 reviews to choose from (here’s the link, knock yourself out). In that plethora of reviews (I’m about to talk like I’ve read them all, but come on) few critics diverge greatly in terms of general comment on the film. This review is going to say things I am willing to bet are heretofore unmentioned.I remember the first time I watched The Sound of Music (which, fine, is an okay movie), and the only thoughts I could put together were that it was creepy… and disgusting.

This was a reaction near unexplainable. Creepy, I suppose, in a sense similar to just about any idea of a family run with military precision, and equally in the same sense that anything which takes clichéd emotional situations to such extremes is just a bit creepy (perhaps like a movie that doesn’t just run over a dog, but runs over it again… and again). Disgusting, I suppose, in a way something like eating four chocolate cakes without stopping, and then being presented with a chocolate cake. The Sound of Music evoked, after some span of being force-fed its treacley goodness, the same sort of reaction of disgust to every next bit of syrup.I throw this out here simply to call attention to the idea that people, critics or not, are going to have very different reactions to things, often wildly different, and moreover they ought to have wildly different reactions. I won’t tell you how many of those 308 reviews I’ve read (because it isn’t all of them, but it is somehow too many), but they were all very similar. What’s surprising, is that this is not generally the case. This difference of reaction I refer to nearly always (as far as I’ve seen) shows up quite noticeably, especially among those doing a lot of movie reviewing… like, let’s say it was their job. Not so much here.

And, I am bringing all of this up, because no one seems to have had anything remotely like my reaction, and that includes those who gave Sweeney Todd their highest recommendation (or most stars, or whatever).

As the credits began to roll, all I could think, for about five full minutes, was, “That was beautiful.” That’s it. As those five minutes ticked by, and I started moving into the next five minutes of my life, all I could think was, “’That was beautiful,’ is not going to count as a movie review.” But, it was really my only reaction. I don’t mean any of the 2-10 definitions either. I mean definition number one, beauty… being full of. There were just buckets of blood, people murdered out-of-hand every time you turned around, cannibalism, severed arteries throwing blood every which way, a meat grinder that could hold a Volkswagen Beetle filled with arms and legs… and so help me God, I had no other thoughts about the film at all. Everyone involved in the film was excellent. Johnny Depp was brilliant, and I like him to begin with. Helena Bonham Carter was surprisingly good, and amazingly adept at flowing through the role. Tim Burton made me forgive him for Planet of the Apes. But, I could think of anything to say…, and I’m about to not say it.

The story has been around at least since Sweeney Todd was given a name in 1846, but Charles Dickens referenced the tale several years earlier as something of an urban legend that had been around the block for who knows how long (wiki). In this version, which follows the Sondheim musical, Sweeney Todd is actually Benjamin Barker, a one-time barber who was sentenced to Australia on a charge made-up by the judge who wanted to steal his wife. 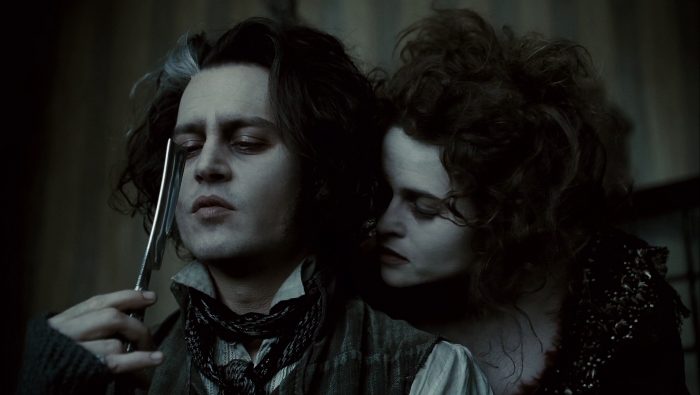