Spore – Taking You Where No Sim Has Gone Before 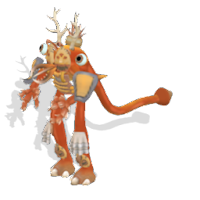 Spore has finally hit the marketplace, and it looks like it is on the way to becoming just the sort of massive explosion predicted.  Looking for a way to branch out from the Sims franchise, which has sucked people in for years, and never seems to stop releasing add-ons, EA has moved away from mere people and created something like a life-in-general sim.

You start Spore as a mere cell thrust forth onto a welcoming planet by a passing comet, and the adventure begins as you try to wrestle your way up the food chain.  You swim about, eat, and try to grow your way into the Creature stage of the game.  From there you either try to get along with your neighbors who also step forth from the primordial ooze, or try to wipe their species out.  In either case, you earn DNA points which allow you to further move up the food chain by reinventing your creature with new parts you acquire.

You may choose stronger jaws, claws, or poison spitters if you’re looking to eat your way to the top; or you may choose a better singing voice, dancing feet, or twinkling light spots if you choose to be friendly and weak.

Everything about your creature can be customized to meet your whim, and there is no look too outlandish for your particular climb through sentience. 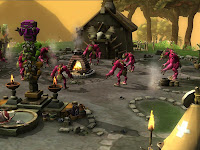 Once you grow a bit more, you are ready to advance to the Tribe stage, where you must design buildings, and get your creatures the tools needed for survival.  Then you’re on to Civilization, where cities are grown, resources are collected, and you get to put your creativity toward the car, boat, and plane of your dreams.  Ally with other cities, or convert or destroy them.

When you master civilization, and rule your home world, it’s time to jump into outer space and visit other planets.  Start trade routes, seek out unique resources from other worlds, or just blow everyone up.

Along the way, the choices you make lead to classifications of your species (Predator, Hostile, etc.), which lead to bonuses specific to those classifications.  The hostile have attack bonuses, the peaceful can make anyone their friend.

So far, the game is brilliant.  I do have to admit that I have only tipped the iceberg of the Space stage, which is when the game really takes off and offers up untold possibilities, and apparently fairly endless playability.  Each stage is really taking a step into an entirely new game, which is perhaps good and bad.  For instance, once you step out into tribe mode, it doesn’t really seem to matter how much investment you’ve put into the greatest ever claws and tail spikes.  Once you get into Civilization stage it really doesn’t matter what you look like at all.

As I say, that can go either way, but it can be a bit of letdown when you have four mouths and spikes all over you, but it doesn’t matter because that other guy has bigger guns on his plane. 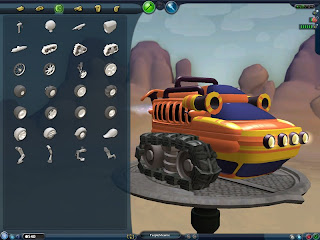 Nevertheless, it’s a very fun, quick-moving game.  Depending on who you ask, The Sims can really drag, and you can sit there for a quite a while without much in the realm of tangible improvement.  That is not at all the case with Spore.  You can zip through the first three stages in less than an hour if you’re trying, but it is equally fun to take your time with them and explore it up for a while.

My 7-year-old has played it a bit, and though I wouldn’t say he can really master it, he can play it without getting too frustrated (he has a frustration hair-trigger), but he loves to sit and design creatures, buildings, and vehicles.  It’s really managed playability for a wide range of ages.

A popular question here, and for this kind of game, is whether or not it will actually hold the popularity that will make it playable long-term (thus maximizing the investment).  Is it going to be the next Sims, and have updates and add-ons for months, if not years?

That’s obviously a tricky question.  I had the game up at about 1:00 pm on the day of release, and there were already thousands of uploads from players to the website.  Another feature of the game is that if you play while connected to the internet (and you log in, and choose to activate this), your world/s may be populated by creatures other Spore players have designed.  So, it has DayOne popularity, but will it last?  I think it is going to depend on just how much can happen in Space mode, and how much people become interested in starting new games.

There is obviously unlimited replay potential.  You can start designing an entirely new creature, and take a new approach to life.  Are people actually going to do that… after the first couple of trips through life?  Can you play in Space stage, and continually meet new creatures on new planets?

I have no idea.  But, I didn’t think the Sims would really last either.

It’s massive and addicting, and I definitely recommend it.  I’m hesitant to say that it’s going to take over the world, but it’s very fun and worth playing.

And, for the benefit of those who are interested in such things, there are apparently a wide range of cheats available.

The one problem I will note is that (for adults) the Easy mode of play is really like a whole game tutorial.  It’s incredibly easy.