Randall Miller has been floating around the entertainment industry for a couple of decades now, making good on the fact that he is Rhea Perlman’s cousin. Though he has several credits at this point, they mainly amount to acting as – Ice Cream Attendant – or directing Houseguest, take your pick as to which of those you want to steal from him. But early in his efforts he managed to write and direct a little number known as Marilyn Hotchkiss’ Ballroom Dancing and Charm School. It starred William Hurt, and no one ever heard of it. As Randall Miller’s resume fills with items most people might leave off as simply – Will Discuss Gap In Employment History – he decided to take another shot at his own work. It was the best move we are likely to see from him. 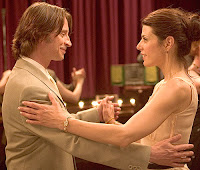 The story is an interesting one, and basically it is this – there are people out there who exist merely so that at a certain point they will bump into you, which will cause you to fall so that your future wife, whom you would not have met otherwise, will help you up. The thing is, those people have lives as well.

In this particular case, that person was in a car accident and is going to die so that you could see them and be forced to talk to them. The Universe is sort of a sick place.

It all starts with Frank Keane driving his bread truck, when he comes upon an accident and finds Steve Mills in rather bad shape. Though he has moments to live, Steve doesn’t ask for comfort, doesn’t ask for his family, doesn’t even ask that his truck accident lawyer Glendale is called up to prepare the inevitable suit his family will have against the driver that hit him. Instead he tells Frank of the appointment he can’t miss. It seems that Steve made a pact when he was a young boy to meet a girl on the fifth day of the fifth month of the fifth year of the new millennium. It’s about forty years since this pact was made. Steve, as he repeatedly tells us, is not going to miss that date. Only he is. He uses his last breath to demand that Frank promise to go meet the lovely Lisa in his stead. Hmm.

Frank, of course, has his own problems. He’s just trying to get through the fact that his wife died recently, largely by going to group therapy, and keeping someone else’s appointment to go to a dance school isn’t high on his list of things to do. Besides, the girl isn’t really going to show up anyway. Is she?

The rest of the film spans the decades which ultimately, and tangentially, make up Frank’s life story. That is, including as it now does, Steve’s story. We learn about Steve’s childhood relationship with Lisa as he reports it with stunning detail to Frank. We follow Frank’s time in therapy as he tries to deal the loss of his wife. And then there’s the dance class. Frank keeps the appointment, and continues to take Thursday night lessons. As time goes on, the ragged group that make up a dance class in a school past its prime begin to become part of Frank’s life.

It’s a charming and easy-going look at a Butterfly Effect-esque view of the world, but don’t take that comment the wrong way. It’s executed brilliantly, and this is a very difficult task. There are any number of small details that could send this film very wide of the mark, and leave only a maudlin, meaningless bit of Lifetime Movie Network garbage.

I would like to give a lot of the credit to Robert Carlyle, especially because he never lets his character slip into something that would remind us that the plot is a little silly. His character never plays to the situation or “motivation,” and so his confusion, happiness, grief, recovery, etc., all feel honest. I would like to give him the lion’s share of credit, but I just can’t. It isn’t that kind of movie. To be honest, it isn’t that kind of play, which is much more the feeling. It is instead the kind whose whole purpose is to force you to focus on the fact that even – Paramedic #2 – (played by Liz Burnette, by the way) has a life, and really exists.

Though there is a certain sappiness that is unavoidable with such a film, I’m not sure that there isn’t some measure of it definitionally involved in any up close look at life. It’s daunting to look out at all those people, and think that they might all really be there. It’s troubling. Now here’s one who is, frankly, more or less pointless, except that Frank Keane went somewhere he never would have otherwise. Perhaps pointless. Insignificant. But, he loved a girl once. And now, maybe, he put a man back together. And what about all those other people? There’s a whole dance class full of them. Group therapy is almost exclusively made up of them. It’s like they’re everywhere.

This is not, by any stretch, one of the best movies ever, but it has something in common with all movies that stand out in a crowd. The reason the movie makes the grade (and is worthy of a few too many words) is that it remains somewhat aloof. It has a lot to say, but it never really says any of it. Neat trick with such a premise. It is a movie that actually believes in itself, and just doesn’t give a fig if you listen, hear, or understand. That’s not sufficient for a great movie, but it is necessary. Here, it is part of the point of the movie.

Jokes about Rhea Perlman kin aside, at the end of this movie my wife asked me how they got so many big names in such a small, indie film. I wonder how they get them into the other ones.