Down With Love Revisit

Having to review the new release disc of Leatherheads led me, somewhat unavoidably, to thinking about Down With Love. I think the movie has probably actually improved somewhat in my mind since it came out, so I’m going to revisit my review. 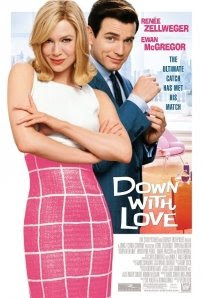 If you happen to be a fan of Pillow Talk, Send Me No Flowers, Lover Come Back, Rock Hudson, Doris Day, and/or Tony Randall…, well, frankly I’m still not sure how much you’ll enjoy Down With Love. On the other hand, if I haven’t mentioned anything that meant anything to you yet, the odds are pretty solidly against your liking it, or at least fully appreciating it.

The last two years have been filled with odd, wonderful, and sometimes both, attempts at updating the movie stylings of bygone eras, and that’s exactly what we have with Down With Love. The three Hudson, Day, Randall movies mentioned above are often referred to as ‘sex farces’, and Down With Love takes that idea, updates the tone and style a bit, and just tries to have a hell of a good time. It works, mostly.

Ewan McGregor takes over for Rock Hudson and plays the role of Catcher Block. Renee Zellweger is Doris Day as Barbara Novak. David Hyde Pierce is Tony Randall (and let’s face it, he’s Tony Randall whether he’s in this film or not) as Catcher’s boss, Peter MacMannus. Tony Randall, because isn’t that rather clever, has a small part in the film himself. You’d obviously like to make a similar comparison with Sarah Paulson’s Vikki Hiller, but one of the movie’s flaws is that her role is overly cut to the extent that such a comparison would only be hopeful as opposed to actual (and there isn’t such a straight line comparison to make in any case).

In the modern version we have here, the MacMannus/Hiller subplot isn’t given enough time, because as we all know, there is a special person who goes along during production, and he starts holding his breath whenever both leads leave the screen and if he has to let it out before the leads come back, something gets changed pronto.

Our story begins with Barbara Novak sauntering about with her turned up hair and outfit that can only be described as ‘kicky’ on her way to a meeting with a large publishing company. She meets up with her editor, Vikki, and the two of them face down the good ol’ boys of the board room, hoping to prompt the company to publicize Novak’s new book, “Down With Love”. We suspect things aren’t going to go over too well when one of the big shot editors asks Vikki to get him some coffee. Things look somewhat bleak for Novak and her book.

Meanwhile, over at “Know” magazine (the magazine for men in the know), Peter MacMannus, in a fit of what I believe is known as ‘madcap zaniness’, is in a rage and about to fire his star writer, Catcher Block. We’re given to understand that this is probably the tenth time this week that Catcher’s head has rested precariously close to the Block (ahem). Once Peter is calmed, he has a favor to ask of Catcher. Peter, the hopeless neurotic (and spinster according to his mother), has received a call from Vikki, and that’s all it takes where Peter’s concerned. Now he wants Catcher to interview Novak so that “Know” can do a story on her book. 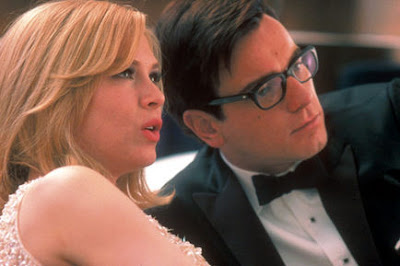 “Down With Love”, by the by, is a book that purports to instruct women how to…, well that’s tricky really, let’s say, how to achieve their goals and become successful businesspeople by having nothing to do with love. That’s what it might say on the dust jacket anyway. What it seems to come down to though is something more like, how to become successful and really stick it to those bastard men by becoming the equivalent of the worst of all men. Not absolutely as catchy, but still likely to sell.

Down With Love Women, a term bandied about in the movie, are women who want nothing to do with love and marriage, and are only interested in one-night stand affairs, thus freeing themselves up to put all their energy toward becoming successful.

The book soon takes off, and women everywhere are reading it, much to the chagrin of men everywhere. We’re now free to dance our little dance with Catcher and Barbara, who obviously perform the movie equivalent of chasing each other around a table, switching chaser/chasee roles several times along the way.

Apart from the fact that I personally would have liked a bit more time allotted to the supporting actors, the only real flaw in the film is that the first act is decidedly weak. This is a movie that’s all about tone and tempo, and for all that the wonderful opening sequence establishes our mood and gimmick, the first act stalls. We know we’re looking to the Hudson/Day movies, and we know that we’re about equal parts “Evening with Dean Martin”, The Hudsucker Proxy, and pick your Orbitz commercial, but the movie falls down in its attempt to establish our characters and backdrop, and things don’t really get into full swing again until Catcher hatches his scheme and the real high-jinx can begin.

That aside, the movie is wicked fun, and I mean those words individually and together. It’s rather saucy most of the time, and occasionally extremely saucy. You ought to get the reference of the split screen phone call, but even if you don’t it’s hilarious. Zellweger and McGregor are excellent choices, with McGregor especially shining. Zellweger has a bit more difficulty living up to the comparison, but on the other hand she’s far and away the best choice. There’s little room to say anything about David Hyde Pierce, except that he’s practically a better Tony Randall than Tony Randall.

On all technical fronts, apart from the first act issues, the film is simply amazing. I’m frankly unsure what to make of director Peyton Reed, who seems only capable of directing really bad television and really good movies. His Bring It On is unprecedented in its ability to furiously mock something while duping the thing’s fans into enjoying it. Here he seems to have the golden touch, creating (once we get going) a simply admirable tribute that delivers all the fun and frolic the audience could hope for. The story by relative newcomers Eve Ahlert and Dennis Drake (and I suspect Peyton Reed) holds onto the general plot trappings of the classic sex farces, but also puts some fine spins in as well. Marc Shaiman  provides a score that lovingly reminds of just the sort of musical accompaniment it should. Frank De Vol of course, but also others of the period that made the music a character, and a scampy little character at that.

I have some reservations about the movie, not the least of which being Barbara’s ultimate shift of focus (well, technically I guess it’s her penultimate shift since I’m not talking about the very end of the movie). At that point in the movie I think we’ve really gone around the wheel enough, and though it makes the ‘now know Now Know confusion’ scene possible, I don’t think the movie really gains anything. A few brief minutes of extra ending so that things can flip-flop once more, but to no great effect.

Still, overall it’s great fun. A warm, wonderful treat that (hopefully) overcomes its homage burden by becoming its own ‘reference not required’ entity.