One of the trickier problems you find in superhero movies is that the whole creation vs. story question is always an issue for the script.  How much time are we going to spend working out how the superhero came to be, and how much are we going to include some actual “story” in a bigger picture sense?

The trouble with Iron Man is that it really only has the introduction piece.  It leaves out story in favor of a bit of commercial which is anti-war, or anti-weapons, or anti-something about guns and terrorists being no fun at parties, or something.

Tony Stark (Robert Downey Jr.) is a genius, and he inherits his father’s giant arms production company.  He’s playboyish, ultra-rich, and not exactly an interesting person.  He’s the persona Bruce Wayne puts on to make it look like he couldn’t possibly be Batman.  But, during a trip to upsell the military on a new bomb, Stark is captured by terrorists.  Forced to build them their own superbomb, and struck with the realization that they are using a lot of Stark Industries weapons, Tony has a bit of an epiphany.  After junking together a version of Iron Man suit to escape, Stark returns to the free world bent on changing his life, and the global role of Stark Industries.

Following Tony around are his personal assistant Pepper (Gwyneth Paltrow), his father’s business partner, and all around shady-looking character Obadiah (Jeff Bridges), and military liaison and friend Rhodey (Terrence Howard).  Tony and Pepper struggle with their feelings for each other.  Tony and Obadiah clash as they try to figure out who is merely putting up with who.

Tony and Rhodey try to work out a business friendship which includes the curious hiccup of possibly having to send jets to shoot you down out of the sky, and/or possibly having to figure out how to keep jets from shooting you down out of the sky.     Everything runs along according to plan, and the movie is a good dose of fun, mostly delivered through Robert Downey Jr.’s wonderful affect.  It’s definitely entertaining, and despite its somewhat long runtime, it moves about at a fair clip.  It doesn’t quite “do” that much though.  So much attention is given to the supercool special effects, that we don’t really play out the sort of solid story that pushes a movie over the edge into something really great. 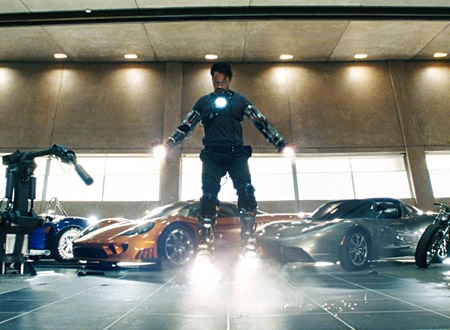 There are complexities.  The girlfriend is delivered well, and fleshes out our characters to some degree, but the bad guys may as well all twirl their mustaches.  Anything that gets thrown out as a potentially surprising twist is only slightly more surprising than if there were text overlay during the opening telling you what was coming.  Put that together with the too frequent, too superficial, and too “kicking puppies” approach to the arms race angle, and anything that might manifest as an actual story is completely absent.

Still, Robert Downey Jr. is a joy to watch, I think creating the character nearly flawlessly.  It does have some amazing special effects, and a host of entertaining elements (helper robots in particular).  It’s absolutely worth watching, and a solid choice as a way to spend an evening.  On the other hand, I’ve got to downgrade it slightly just based on the fact that it made no real effort to do something with itself.