Curiously, not long ago a friend of mine remarked that there are no new fables. If you happen to own a book, says he, purporting to compile the best fables and fairy tales, and that volume is 100 years old, you aren’t missing out on anything. This, just to be clear, is not so. But, it is almost so. 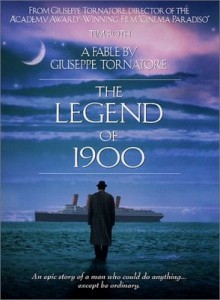 You may have your movies that pop into your head (Once Upon a Time in America is not fooling you with its title, and is certainly a fable), or you may have read a recent story you think qualifies, generally, as a fable, but nothing has delivered itself up in recent times and demanded entrance to the world of fables. Until now. Well, until ten years ago.

You may know what you have in store for you if you know Giuseppe Tornatore. In 1989, he took the world of cinema by storm with Cinema Paradiso, which, frankly, many will argue for as representing rather a good turn at a fable itself. His next four films, good though they were (overall), didn’t get quite the same amount of praise, and by the time his first English-speaking film came out (this one), well, no one has heard of it. It’s not uncommon for a director to hit us with a movie that becomes wildly popular, only to make a few movies that don’t do so well, and finally to end with a movie that dives straight into obscurity (luckily Malena did a bit better for him). It is uncommon, however, when that movie in the ‘nobody ever heard of it’ file is pretty easily one of the best ever (don’t make me give you a number though), and when the fable itself is not merely a rare, new fable, but one of the best fables you’ve had the pleasure of listening to.

The Legend of 1900, in case ‘Legend’ in the title doesn’t give things away enough for you, has a tagline that starts out ‘Once upon a time…’. If that still isn’t enough, 1900 (Tim Roth) was born and abandoned on a cruise ship in the year 1900. Raised by the boiler-room workers, one in particular of course, 1900 grew up in the belly of the ocean-going behemoth, never once stepping foot on land. After a series of unfortunate events, 1900 discovers that he can play the piano. He stays on the ship, becoming a part of the musical entertainment, and he is, possibly, the best piano player on earth…, as long as you don’t mean soil. That, is our story.

Telling us our story is Max Tooney (Pruitt Taylor Vince), a trumpet player who was on board our vessel working with 1900 for a time. It is now several years after Max finally left the ship and 1900, but as Max, struggling through difficult times, is selling his trumpet, he learns that 1900 might be in trouble. We then move back and forth as Max alternately recounts the story of 1900, and attempts to save him.

Like all good fables, our point is to focus solely on one aspect of humanity (or maybe a few, because we also have the Max story in here), and by taking it to its furthest extremes and analyzing it fully, hopefully shed some light on humanity in general. 1900, the character, performs this feat almost magically, because he is uniquely situated so as to understand perhaps very little about life, but everything about himself.

We find in him the perfect focus for a fable, because he is the antithesis, in this respect, of those around him, the normal people. Those who, like all of us, have to some extent or other mastered the ins and outs of ‘life’, but do not score very high on ‘who we are’ tests. Largely, of course, this is because 1900 is in some sense ‘simple’. He is not at all unintelligent, but he has so few experiences, and those he has are drawn from such a narrow list of possibilities, that he has a naivety that would be nearly impossible to come across elsewhere. Eventually, however, the distinction between whether he is able to know himself so well because he is ‘simple’, or ‘simple’ because he is able to know himself so well becomes fuzzy.

Along the way, we stand by as several key events in 1900’s life play out. From a ‘duel’ with the legendary Jelly Roll Morton, to his first glimpse of a woman he falls in love with (sort of). We witness his never-ending supply of madcap ideas. From the innocuous, and by now expected, such as his divergences from whatever the band is actually supposed to be playing, to the decidedly odd and destructive, like playing a grand piano he’s set loose during a storm as it careens wildly around the ship’s ballroom. And, all the while we feast in the most wonderful of soundtracks by the masterful Ennio Morricone. We do get a few of theactual songs by Jelly Roll himself, as well as a sprinkling of Joplin and others, but the vast majority of everything we hear is Morricone’s original creations, though of course the soundtrack is as might have been created during the era.

The one negative thought that I can put together with The Legend of 1900 is that it is somehow a shame that Tim Roth is so young (comparatively). He is never going to be better than this. Very few people, in fact, are ever going to be better than this. He is 1900 to a degree that is somehow, nonsensical though this may seem, almost unacceptable. To a degree that is almost distracting enough to be a detriment to the film. The complexity of a smile, the volumes within perfectly delivered glances, the pregnant pauses that deliver his lines for him, are all exceptional. He moves, he speaks, he stands, he even wears his tuxedo, exactly as 1900 should. It becomes a serious danger that one might stop watching the movie altogether, and simply watch Roth. The rest of the acting is above-average, and by and large it is of just the right ‘bigger than life’ variety. Not so much bigger that it pulls the film too far away from reality, but big enough that the audience can’t mistake where things are heading, or that this is after all a fable.

Of course, wonderful as Roth is, too much credit cannot be given to Tornatore. If you know Cinema Paradiso, or any of his other films, you will not be surprised to hear me say that what lifts this movie to a status that demands compare to the film world’s most elite members is the atmosphere. What is easiest to notice, naturally, is Tornatore’s success at the ‘big areas’. That he has perfected the look and feel of a ride on a circa 1920s luxury cruise ship is hard to ignore. That he adds to that the hints and whispers he needs in order to create a fantasy version is even more impressive. But, what’s most impressive is not the ability to take us right into those sorts of scenes. Where things become truly impressive is in the perfection of the atmosphere of a small room aboard the ship where 1900 gives an intimate ‘show’ for the less than wealthy immigrants coming to America. Or, the delivery of the immigrants’ sleeping arrangements. Or, the boiler room of the ship. Putting a boiler room of a ship on film, of course, isn’t the sort of thing that is going to impress anyone, but a fantasy boiler room is something else entirely.

The film itself is much like the character. More complex by, in most ways, being less so. Giving us more, by giving us less. Existing as something more and ‘better’ than ‘normal’, even in some sense more normal than normal, simply by the inability to be normal. At the end of the story, 1900 wants to know “where it ends”. He asks Max, perhaps hoping for an answer, perhaps knowing with certainty that there isn’t one to give, simply to tell him “where it ends”, and that will solve everything. A fitting question for today’s sort of fable, and a fitting problem that will perhaps lay low our hero.   “Where does it end?” is perhaps the question that ought to be foremost in everyone’s mind, in absolutely every situation. Still more important is the vision of the consequence of not being able to start without an acceptable answer to the question. “Where does it all start?” is a question of much cliched advice and discussion of the ‘with that one first step’ variety, but “Where does it end?” remains untouched, because we are every one of us paralyzed by the notion in general.

“The Legend of 1900” takes us on a voyage of exploration which hopes to deliver some sort of insight into this question, and how it enmeshes itself so completely within the persona of 1900, and obviously within ourselves as well. 1900 is unable even to wrap his mind around the answer that we all know so well (though we shy away from it in every possible way), because he is able to point directly at the end of everything in his world. The answer that 1900 cannot begin to fathom, and that Max cannot bring himself to say, however obvious it may be, because somehow 1900 is a little ‘better’, a little more human, not because he cannot get the answer, but because he isn’t able even to understand the question.     It ends nowhere.