Deep In The Vault For Halloween – May – Movie Review

The problem with Lucky McKee’s May(well, among other things) is that it definitely deserves a good amount of praise and attention, but at the same time, it’s received too much of both. While it’s true that it borders on genius in many ways (all the more worthy of immense praise as the work of a newcomer), it also contains far too many missteps to overlook completely. 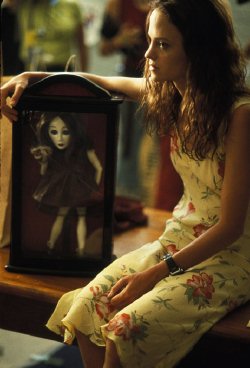 We are introduced to the titular May early in adolescence, and we are quickly and effectively given a setup for the person we’re going to encounter when we move on to the May that exists for most of the film (at something like 20). The story is an allegory, in the vein of what we’d find in something by the Grimm Brothers, but be very careful how you take that. I mean the real Grimm Brothers’ stories.

If you haven’t read any books of Grimm Brothers’ stories which included something like ‘unedited’, or ‘original’ in the title, be careful of the picture I may have put in your mind. I’m talking about the Grimm Brothers in which people are tortured by being forced to wear white-hot, metal shoes, and at least one person dies gruesomely in every tale.

Given that the story is such an allegory, it’s easy to predict the sort of introduction May is going to get, and if we see her in early childhood we know we aren’t going to see anything happy going on.

May has a lazy eye, and is somewhat awkward socially, but her biggest problem (and one largely glossed over by most critics) is that her mother is completely insane. There is much going on in this film as far as “what it is trying to say”, but it should never be forgotten that lurking in the background of whatever else it might be saying is something very clear and direct about just how easy it really is to screw up a child.

We follow along with May as her mother instills wonderful ideas in her. There is little worse, May comes to understand, than having people think badly about you, or laugh at you. The aim of life is fitting in as best you’re able given your decidedly “unfit” status. And, not by any means the least of the important things to remember, pretty things are not only the best things, but they are too good for you to think you are worthy to directly interact with them.

When we make the transition to May as an adult, we see her much as we would expect. She is all but emotionally and socially retarded, and she makes her way through life seeing other people as “things unlike me.” All people are somehow both better and worse than she is, and she has cemented a view of people (and things) as a combination of parts, but not as wholes. She at one point makes the film’s clearest statement, that there are so many beautiful parts, but no beautiful wholes.

Her lazy eye having been so focused on in her own childhood, she has had her view beaten into her. People are to be judged, not by looking at the whole person, but by adding up judgements of their individual features. When she makes statements like these, and obviously focuses on specific features of the people around her, we know where we’re going.

May soon falls for Adam (convenient because Adam was the first man, and also because that was convenient in naming Frankenstein’s monster Adam) who has “perfect hands”. She also falls (sort of) for the perfect neck of her coworker Polly. At this point we’re off to the races. Though Adam says he likes weird when May awkwardly makes the statement that she is, thus giving May an anchor to him that she hardly knows what to do with, he soon realizes that he should have demanded a proper definition of the word.

And though we can recognize that Adam certainly does like weird, and he’s got a student film to prove it, we know what he means in a way that May certainly doesn’t understand. Sure, he likes a good macabre allegory to an extent that many people would call “weird,” but where he (and we) might say, “That’s interesting,” May says, “Hey, I’m like that!” Lots of people might like the occasional bizarre tale that pushes the envelope of our ability to have statements forcefully delivered by way of their shocking effect on us (like maybe in this movie), but that is not to say we want to meet any. May sees the allegory, and certainly thinks it’s “weird” according to some definition, but she doesn’t have much ability to see it as an allegory.

May begins to see herself as developing “a life”, getting somewhat close to certain people, but when those people begin pulling away, or don’t live up to her expectations, all hell breaks loose. Her distorted worldview and upbringing finally begin to take over, and the damaged, but existent, sense of right and wrong falls by the wayside.

The story itself is sharp and well-executed. It’s not simply a case of being able to find the story and statements of a movie, they are actually there. That may not be perfectly clear, but in a lesser version of this movie, you would still be able to say, “Yes, well, what it’s trying to say by doing so-and-so is…” 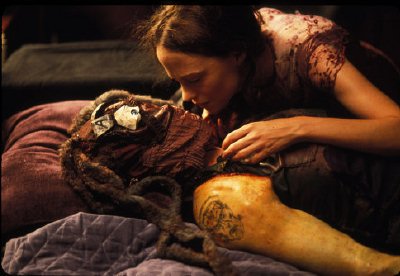 Here, it’s actually saying those things, and saying most of them very well. That’s a tricky distinction to really put your finger on. As I said, the introduction to the character is extremely well done, and it is for just this reason– She isn’t setup for us by using clichéd characters, and stock plot devices that we all know equal “child ruined by crazy mother” because we’ve all assented to the formula in the past. She’s fleshed out more realistically (though naturally allegorically) by way of situations created to deliver a specific end. So it goes with the entire film. It isn’t trying to say. It’s saying.

The movie manages this because of a lot of great decisions by the director, and because of (all things considered) incredible performances by the main members of the cast. The movie is worth watching just to see Angela Bettis’ May, who is portrayed with an equal, and near perfect mix of the abused, the misunderstood, the hopefully naïve, and the fable.

It’s not very difficult for an actor to play “unclear”, but it is quite another matter to be clear in your lack of clarity. The incredibly difficult to pin down Jeremy Sisto does some fine work as Adam, managing to effectively deliver his dual role as the person who sees the value in May, but isn’t interested in becoming invested enough to ultimately ferret it out– and as us. Even the otherwise fairly useless Anna Faris manages to hold her own, though she suffers greatly by the comparisons we are forced to make with those around her.

At this point, you may well be asking yourself what’s wrong with it, especially since I started by saying that it’s overly praised. Quite a bit actually. Somewhere along the road that is the process from concept to final product, the narrative structure broke down almost completely. The movie knows very well how to say the specific things it’s saying.

When it comes to saying them in a cohesive string it gets lost, and it’s a very muddled road from one to the next. We move between scenes in an altogether haphazard fashion, and elements are often introduced to no clear, or “real” purpose. The movie also often suffers from its budget, and though I’m the first to overlook such things, they are nevertheless distracting.

The most debilitating problem the movie has, however, is that while writer/director McKee makes a lot of great choices, he also makes several horrible ones. Perhaps the most glaring are the needless, self-defeating opening to the film, and the juvenile and pointless ending. While the allegorical medium we’re in allows for elements similar to the very last thing that happens in the movie (and the movie is not in short supply of them), it doesn’t allow for the downright silly.

These points are manifestations of the overall problem that McKee (perhaps as writer) doesn’t know where to stop. Once we enter the third act of the film, and things really start moving, it quickly becomes too much. When we get to the last ten or fifteen minutes, it needlessly goes too far. Possibly this is just an inherent danger of allegory, but after the first few minutes of the third act, nothing new or different happens in the movie, the same “thing” just keeps happening again. The movie is out of statements, or relevant exposition on a statement, and it devolves into perhaps a more standard approach of film, which is to just keep saying the same thing at you, because it doesn’t think you’re clever enough to get it.

Still, the movie certainly has its merits, and the positives do outweigh the negatives. It certainly makes me look forward to McKee’s next film The Woods (though being serious about wanting me to call him “Lucky” is a bit much). I’m willing to play along and learn the lesson of the film, and thus judge the thing based on the whole. On the other hand, let’s not go overboard. To say that the girl with the lazy eye nevertheless has value (perhaps even some very high value) is not to suddenly say that she doesn’t actually have a lazy eye.