The Mentalist is bold, brash, and snarky, and by far the best television has offered in quite some time. 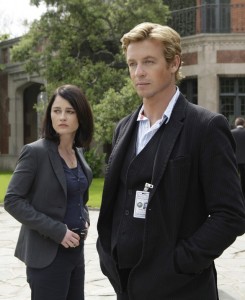 There have been countless efforts down the general Sherlock Holmes road, and few of them have managed even to be bearable.  In recent years a couple of movies took a shot at reviving a “real” Sherlock Holmes.  One close to the man in the original books, not what people have come to know through films.

One was Zero Effect with Bill Pullman and Ben Stiller, and the other was From Hell with Johnny Depp.  Not, I suspect, what you thought I was going to say.  Pullman and Depp both play Sherlock Holmes, without donning the moniker, as he was… a genius sure, but also rather a bastard.  It’s an element missing from most everything on film that actually uses the name Sherlock Holmes.  Geniuses are hard to suffer, and find it hard to suffer the world.  This leads them, frequently, to be intolerable, outrageously annoying, and possibly addicts of some kind… possibly all of the above.

The Mentalist is yet another crime-drama, that follows the detecting skills of one Patrick Jane (Simon Baker – The Devil Wears Prada, The Guardian) who is a “consultant” for the CBI – California Bureau of Investigation.  Mr. Jane used to be a fake psychic, and turned a pretty good dollar doing it.  He was the big time, as far as that line of work goes, and he now freely admits he was a fake.  Like Holmes, he’s just good at observing.

The difficulties of a Holmesian character are put down here by Jane’s brutishly direct manner.  He’s got a bit of House working for him, but he doesn’t go quite so far.  He’s actually charming in an odd sort of way, and his openness (viewed by many as rudeness, and/or serious lack of social ability) manages to come through as something less caustic and bitter than what you get from House.  It’s almost a sort of super-naivety… Why wouldn’t you just ask the man if he murdered his daughter, and if he did it because he was sleeping with her?

This is a tricky character to pull off, and the star of the show lives up to the demanding task.  Simon Baker is spot on as a character who is troubled, but gifted, and rather intolerable because most situations are simply boring.  The character goes the typical game one better here, because you see a lot of geniuses portrayed as finding the people themselves dreadfully, mind-numbingly boring.  The “simple” other people who are not nearly so clever as they… that sort of thing.  Jane does not portray that attitude at all, and it makes him a bit more likable, and bit more approachable.  The situations, and problems are simple.  The people might even be simple using some definition.  He certainly seems able to figure them out to the smallest detail almost instantly.  But, they’re still fascinating.  They are, perhaps, still “the stuff of which great things are made.”

That’s a hard attitude to pull off, and you’ve got to give credit to Simon Baker for the balancing act he has to go through.  Thus far, the rest of the cast is holding their own, and delivering well, but it is hard for them to stand next to Baker.

Series creator Bruno Heller was also a writer for Rome, (a very good show as well, but a very different task) and being familiar with that show might clue you in a bit as to the pace and dialog-scheme of the show.

The first five episodes have played out brilliantly, and we’re moving into a critical time for a show like this.  I remember when House first started, and there was a real roadblock after something like six or seven episodes when it became distractingly boring that no one could conceive House might be right about anything.  The Mentalist has built in a bit of a save to this, in that Robin Tunney‘s character (who is his boss, or at least bossish) begrudginly admits that he does turn out to be right a lot.  She might be moving toward a dangerous line of over-disbelieving him though.  We’ll see.

I strongly urge you to check out the show.  It’s fast, fun, and at least going for something mental over silly drama (unlike many a show with ludicrous ratings which… ummm… investigate crime scenes, and think acronyms…or I guess just abbreviations… are, “Way Frickin Cool Man!!!”)

It also has one of the top five premiere episodes ever… according to me… and without question the best first ten minutes of an hour-long show ever.