There is a scene in Christopher Nolan’s The Prestige which shows one of the film’s two rival magicians talking to a small boy. The heart of the conversation is the old magician’s line, “Never show them how it’s done.” There are those who will find even the greatest of magic tricks to be silly pranks once they know the secret. The rest are called magicians. Despite this knowledge, and largely because of it, The Prestige shows you how it’s done. This, however, is the sort of showing that falls into a similar category as any magician saying, “Inspect these locks, and make sure they’re real.” 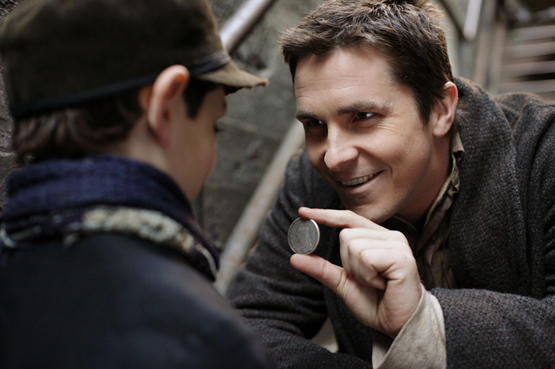 The story begins with Alfred Borden (Christian Bale) and Robert Angier (Hugh Jackman) working together in a fairly small time magic show. Behind the scenes is their manager/trick creator Cutter (Michael Caine). The two magicians begin as intense rivals, with differing perspectives about what they should be doing and where the act should go in the future. Borden claims they should push the envelope and be more daring (one of their chief tricks is an escape), and also that he has the greatest magic trick ever, but it isn’t quite time to bring it to light. When their escape goes wrong causing the death of Angier’s wife, Angier blames Borden, and the two part ways. Angier never gets past a desire for revenge, and their intense rivalry is the stage for the rest of the film.

On one side of this affair, Borden leaves the show and thus has very little avenue for income, being forced to perform in even less interesting venues. Angier remains with Cutter, and slowly grows more popular. Borden, however, has a wife and seemingly happy life, and the idea torments Angier. When Borden suddenly reveals his master trick, and Angier admits it is the greatest trick he has ever seen, it is more than Angier can bear. Angier and Cutter develop a false version of the trick, and their fame skyrockets, but Angier cannot rest without knowing the secret to Borden’s version. 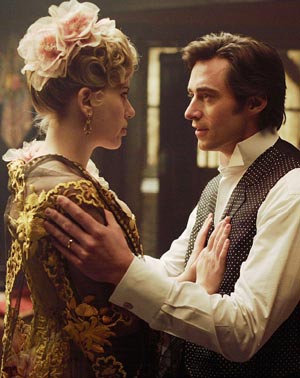 At the end of the film it will show you the secret to Borden’s trick, and you will feel at once very clever because you figured it out well in advance and a bit let down because there is not some other secret waiting in the wings. I must tell you now that the secret to the trick is not only merely the text, it is not even the main part of the text. The real text is not the overly simplistic, “How is it done?” The question is, “Who really did what to who, and why?” In a film that goes to great lengths to describe the three acts to any magic trick, and repeatedly mentions its own title, do not forget what its title is.

Of more importance is the fact that this is a film, similar to all of Nolan’s films, in which the text is hardly there at all. This is not a movie about magicians and their tricks, but about identity, perception, and the prices we are willing to pay. It has been said of Science Fiction, as a genre, that its main attribute is the clarity and precision with which it can describe reality using situations unreal. It is a tricky classification to put The Prestige squarely into Science Fiction, thought it has several elements of same, but we have the same game going on here.

The Prestige wonders what it means for Robert Angier to say, “I am Robert Angier,” or for anyone to say, “I am X,” and in more than one of the film’s versions of this wondering, we do not need science fiction.  But, this is a movie that wonders about this question from at least six different angles, and each one of them makes us wonder a little more about ourselves.

To borrow from another Nolan film, we all (as citizens of Gotham City) wonder, “Who is the Batman?”, but taking off his mask doesn’t really get us what we’re after, it only gives another way of referring to him. Further, as we might similarly imagine of both Borden and Angier here, what if Bruce Wayne himself poses the question? 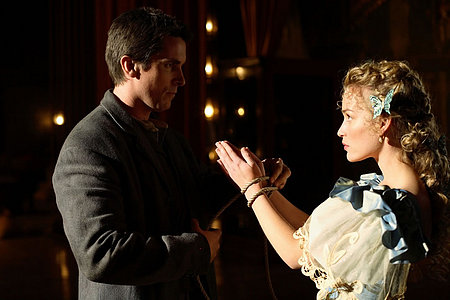 Ultimately, though a host of identity facets are built into things, this is really a movie about revenge. Perhaps vengefulness. Perhaps who we are in yet another sense. The old saying goes (let’s say) that when you have revenge in your heart you die a little bit more each day. The question now is not whether or not that is true in some figurative sense, but would you in fact choose it. Accept that loss. Not, “is that what we do,” but do we do it willingly, knowingly. And, the movie manages even this question in more than one sense, and goes one further to ask, “Can that loss actually be the revenge?”

The Prestige, is a dark movie.  Often taking place in shadow, and the shadow of gaslight no less, it more often takes place in the darkness of our own minds. It is a film that might, on almost every level and including every nuance, be thought to feel something like a mix of From Hell and Gosford Park, which is a statement that cannot be thought to make sense any more than any other feeling.

It is filled with subtlety, most of it Christian Bale’s responsibility, and he is one of the few actors alive who could pull it off as well as he does. The film’s charm is its wit, and the way in which it has so completely committed to its purpose. It is a movie that is a magic trick, and though several films might meet that comparison to some extent or other, this one smiles wryly at them out of the corner of its mouth.

It shows you around, it leads you through the examination of the iron bars, and just when you think you’ve figured out how he might have gotten out of the cage, or somehow never been in it in the first place, you see that the magician is sitting right next to you in the audience.

The film also, in its continued quest to wonder what it means to be a person, is a film about how we treat people. How we treat our wives, our assistants, our lovers. Are we all so possessed, by our fame, lust, revenge, or other demons, that people become just props in our overall plans? Do we go home everyday (or half the days) and just walk the walk amongst people we feel don’t really have much to do with us? Do we sell our lovers’ souls when it will get us something more interesting to us than a mere person? Will we kill a few birds everyday just because people will clap at us? Can you really say that someone else is guilty of treating your wife poorly, when you devised the situation that would allow him to treat her poorly?

At the end of the film a little girl gets to see a really cool magic trick. But, in the way that the movie leads your eyes, you can’t help but think that it isn’t all that much more exciting for her than it is for every child everyday. Daddy comes home.

There are those people, few though they may be, who find out how a really good magic trick is done, and their reaction is that it is simply beautiful. For the rest, you still look when someone waves a glossy, white handkerchief and says, “Watch this!” And, that may be enough.

Just as my own small afterthought, and in tribute to the overall effort of this film, which I believe is truly masterful — Consider all I have mentioned as being contained in this film — there is no small amount of sense in pointing out that some days we mean it, and some days we don’t.

It is, in fact, probably one of the most insightful things a movie has ever said.