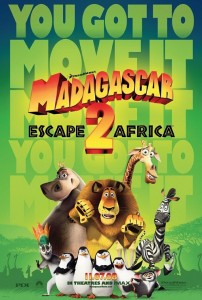 Madagascar: Escape 2 Africa suffers from all the problems we’re familiar with when it comes to sequels, but don’t generally expect from recent animated efforts.  Rather than a real progression of the story we had, it’s just an excuse to milk characters that seemed to work, with a plot from the book of standard sequel plots – which is to say, it rips off what it can, and is mindless where it can’t.

The movie shoots out of the gates with a backstory perfectly designed to freak out the children in the audience who don’t know why they’re watching a lion cub get kidnapped, or a cute, cartoon lion adult take a rifle shot to the head at point blank range.  Sure, the lion doesn’t actually get killed, and only loses a small notch of ear, but that’s a defense that misunderstands the under ten viewers.

Knowing what works, Madagascar 2 then jumps right into a quick, “I like to move it, move it,” because it’s always a good idea to kickstart your sequel by showing some of the original.

That scary flash into the past showed us Alex the lion being stolen from an animal reserve as a cub, and introduces us to Alex’s father and another lion character I like to refer to as “Pudgy, Big-Hair Scar.”  When we jump back to the present, and knock through our animals’ “escape” in five minutes or less so that we can get on with things, they wind up in Africa and in about two seconds find themselves standing next to Alex’s dad.  Shazam! 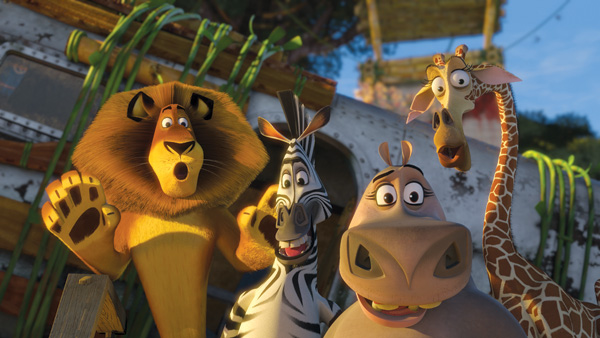 We then saunter into painfully routine versions of such boring clichés as: living up to dad’s expectations, being a real friend, doing what you gotta do, and the giraffe is in love with the hippo.  It rolls along like a few screenwriting How-To books fell on the floor, and the people picking them up were a little tipsy, and already had their checks anyway.

Madagascar 2 (because I’m not calling it that whole thing all the time) turns out to be an exceptionally odd duck in recent animated movie memory.  Animated films, of the big production, family entertainment variety, have been following the trend established not only by Pixar itself, but also Pixar players (Brad Bird especially).  It is a trend we might describe as, “what if we didn’t talk down to kids, worked things out so adults could enjoy things as well, had something at least fairly legitimate to say, and made it a wildly fun time?”

Walt Disney probably wouldn’t love me suggesting that Pixar came along and pulled the animated movie world (specifically the Disney entity) out of the dead zone by basically understanding Walt Disney at them, but that’s pretty much where we’ve been for several years.  Tell a really good story by focusing on everyone enjoying it.  Wild concept.

Madagascar 2 abandons this theory at every turn.  It doesn’t have even a passable story, it just has an excuse to make a movie and rake in cash because we know people will go see it.  You at least aren’t surprised by that.  Oddly, it doesn’t focus on anyone.  There is almost nothing for adults who will, hopefully, be bored at best by every ill-conceived turn of the plot, and there isn’t nearly enough fun for the younger crowd.  There aren’t even a few choice scenes that are quotable, or at least memorable.  The characters devolve into the fairly meaningless vehicles used to throw things together they ultimately are, and in all ways the life is sucked out of the entire affair.

It seems written by people who didn’t understand why the first movie was… well, decently above-average.  As a perfect example, the old-lady with handbag character is played up to ridiculous levels, and apparently because, “Uhh… I don’t know, people liked that part in the first one.”  If a ten-second gag got a positive response in one movie, why would you not run the same gag into stupidity for ten-minutes in the next one?  The answer is really… “Cha-Ching – Whatever.” 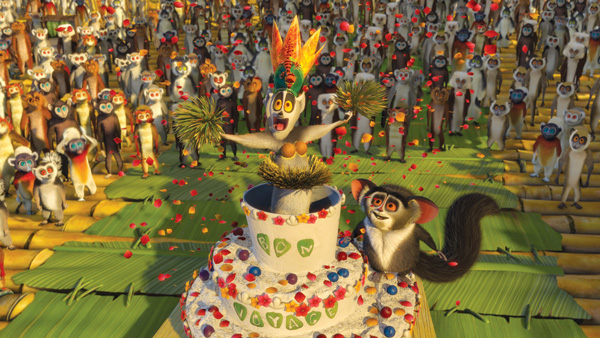 The only redeeming quality of the movie that isn’t fun, funny, or entertaining is Julien, and while he is delivered wonderfully, he isn’t written in nearly as well.  On the other hand, at least Sacha Baron Cohen is given credit this time around, whereas the voice of Julien was a curious mystery last time around.