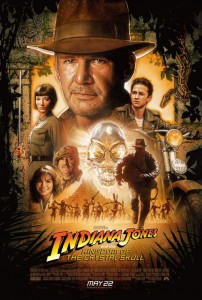 No one wanted to listen when I told them League of Extraordinary Gentleman was a good movie, and yet reviews for Indiana Jones and the Kingdom of the Crystal Skull have not run particularly negative.

You probably don’t actually know where I’m going with that.

Crystal Skull finds Indy first at the mercy of Natasha Badanov, then surviving a nuclear bomb blast, then persecuted by his own communist-terrified government, then on a quest to return a Crystal Skull to a mythical temple… so, that’s the first ten minutes.What follows involves giant, man-eating ants, South American natives who apparently live walled up in a tomb awaiting unsuspecting passersby, and a plot that ultimately makes absolutely no sense whatsoever.

Throw into the mix Mutt Williams (Shia LeBeouf) who steps in as a “young Indy” rascal in a leather jacket, Indy friend/possible traitor “Mac,” and the return of Karen Allen as Marion/love interest, and you’ve got… a lot of excuses to babble meaninglessly when we need a short break from the “action.”

The realm of “big, goofy, action” is one which demands suspension of disbelief, but it has to actually understand suspending disbelief.Raiders of the Lost Ark knew just how to play that game, and knew exactly what it was.The whole idea of such films is basically a caricature of life in general.Bad guys are bigger and badder, bizarre monsters might pop up, heroes dodge a few more bullets than plausibility dictates and outrun rolling boulders and hordes of natives, and survive the cliff jump into the water.It all comes together and lifts up an audience because, “Man!That was so cool!” (in bold… you know what I’m saying… with exclamations) 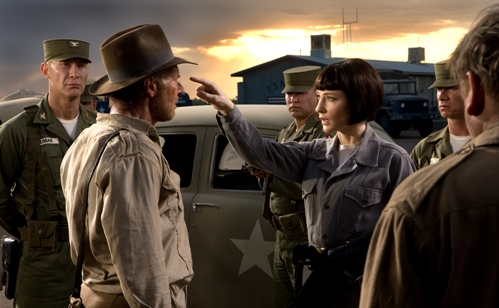 Crystal Skull almost instantly devolves into self-mockery, and unfortunately doesn’t realize it. There is “bigger than life,” and then there is “completely ridiculous,” and if you’re going to make a film in this genre, you’d better know the difference.Man-eating ants are pretty cool actually, if we spend maybe two minutes on them, run away, and have a worthwhile story to get back to.If we run from them for ten minutes, have a fist fight in their midst just so we can meaninglessly display the magic effects of an artifact (that makes no sense), and eventually get back on track with our completely nonsensical story… well, then they aren’t very cool.When they’re scary and creep you out a bit, you’re giving your audience something.When they pick up a guy and carry him down into the depths of the anthill, you’re just being stupid because you know you can.

Similarly, running your hero to the edge of a cliff, within the context of a meaningful story, and forcing him to jump for the water is giving your audience a bit of a thrill, and hopefully doing something that looks and feels rather adventurous.You can imagine the flashbacks to days of cinema long gone, when we came up with “cliffhanger,” and audiences might actually move to the edge of their seat with bulging eyes, and ultimately cheer at the screen.

There’s no thrill in watching someone drive a car off a cliff and having that car caught by a tree which slowly lowers the conveniently amphibious car into the river below.There are no bulging eyes in Crystal Skull.There are only blank stares and much head scratching.

You can’t deny there is a lot of action in Crystal Skull, but there is no fun, no adventure, and nothing that holds things together and makes it worth watching.At no point in the film did I care in the slightest what was going to happen next, and as things progressed I only grew less interested as the thing became completely farcical before my eyes.Crystal Skull even invents a new tool of storytelling which is closely related to Deus ex Machina, but would have to be named “Deus ex I Don’t Know What The Hell To Do Now So The Bad Guys Magically Appear.”

We all know that the big names associated with this film lost themselves long ago listening to their own press.Creators of admittedly fine films, they have both stumbled through the barrier that differentiates, “What I do is good,” from “Whatever I do is good,” and we aren’t likely to ever see any return to usefulness.

Here’s the trailer – knock yourself out.