It is rather fitting that Robert Altman and Garrison Keillor worked together for what would become Altman’s last film. Altman has long been known as a genius of film conversation, while Keillor… well, seems to like conversations.

I also find it fitting, because both men are revered as geniuses within the right niche, yet immediately dismissed as the pinnacle of boredom by the overwhelming majority. I think both sides of that coin would express their fascination, or disgust, using more or less the same explanation. Again, conversations.

A Prairie Home Companion follows the last night of GK’s famous radio show, letting us behind the scenes and into the lives of those who come together once a week to perform in front of a live audience. We hear a pair of singing sisters re-re-retell stories of their childhood, largely focused on the many virtues of the mother they didn’t seem to like much. We meet Dusty and Lefty, a pair of cowboy singers fresh from their imaginary life on the range, who “sing” rather goofy songs, or tell rather goofy jokes and pretend it’s a song. We watch the backstage personnel scramble frantically and worry to a curious degree (being that it is the last show) as they try to manage the chaos that will hopefully get on stage and do something. Meanwhile, GK appears to wander aimlessly, almost as though unsure of where he is, and what he’s meant to do.

Unlike most of Altman’s films, A Prairie Home Companion is simple and wise, and likely the one as a result of the other (most of his films are fairly complicated and wise). This is perhaps a reflection of our Man of the Show, GK, who is definitely simple, though the viewer must face himself in the mirror and discuss wisdom. I lean rather toward wisdom here, and might be pressed further into describing him as downright sage. Part worn-down, pragmatic, father-figure, part Zen Buddhist, part Vulcan, GK ambles through the routine of his radio show as we are perhaps meant to suppose that the wisest of the wise go through life. We imagine him saying something like, “Life is not what you make it. Stew is what you make it. Life is just sort of what happens.”

That general theory is either vaguely or straightforwardly put before us during virtually every second of the film, by virtually everyone. GK can not tell us often enough that he stumbled accidentally into radio, managed it for thirty years, and now that it’s over, “Well, I’ll get a job, I suppose.” Our singing sisters have lived the closest thing to their dreams for their entire lives without ever managing anything much like their dreams, if they really ever were their dreams at all and not their mother’s, but what does anything matter anyway, because, “We had a good life.”

Basically, the film seems to be putting forward a GK, down-to-earth, rural Minnesota, simplistic (in a good way) view of life which suggests that ultimately, “We had joy, we had fun, we had seasons in the sun,” is not a line you find uttered by someone who spends a good deal of time worrying about where they are going to find joy or fun, but perhaps by someone who might also ask, “Are you going to eat the rest of that?”

It’s a catchy little tune they’re singing here, in this trip through some sort of past something. We might as easily watch the backstage life of an old Vaudeville company, or some traveling carnival from days long gone. It’s a sort of family, and a family of people who do what they do, not because they are particularly wonderful at it, and not because people love them, but pretty much just because they do it. There is a “reality” in that which I believe the movie is trying to get you to notice. 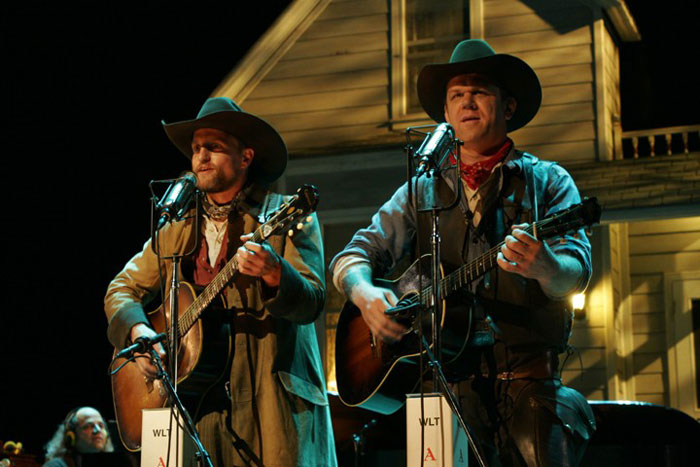 Within the context of a film which is attempting, at the bare minimum, pseudo-depth, it should not go unmentioned that this is sort of a film about a more or less real radio show which passes itself off as being about real people in a real place, all of which is made up. There is something important going on there, because ‘these’ people aren’t really ‘those’ people, and there aren’t any ‘those’ people in the first place. In a film that throws in angels, and has the real show’s Guy Noir turn up as a living, breathing character, it is something I suspect Altman could sink his teeth into, and something which falls in line with my standard reply to those who question my love for My Dinner with Andre. “They are more real than you.” (Of course, in My Dinner with Andre the people are sort of really real, and possibly sort of pretending that they aren’t really real, but maybe they’re just real)

Here is a film which has a deus ex machina removal of the “Axeman,” merely for the purpose of allowing itself to say, “but of course that didn’t make any difference and the bulldozers turned up in the morning just the same.” That’s the sort of thing that passes you in a flash, and is easily overlooked, but in the context is a rather important statement.

This is also a movie which realizes its own frame, acknowledges its statements, and builds little things into the mix which might seem almost random, but are powerful because the film is so obviously self-aware. Take the penguin joke. At one point an angel is talking to GK recounting the incident of her death. She was listening to his show while driving, and laughed so hard at the penguin joke that she drove off the road and was killed. Curiously, she doesn’t get the joke now. She doesn’t understand why it’s funny. “I guess it’s funny,” GK replies, “because people laugh at it.” There are volumes in that exchange, and not only because she, being an angel, isn’t one anymore (a people, that is). But, if you blink you’ll miss the whole thing, and if you aren’t in tune with what the movie is doing, you won’t have any idea why this scene didn’t end up on the cutting room floor.

At another point Corporate America walks into a room and asks who the fellow behind the glass is (referring to a bust). The film’s conscience replies, “Local fellow. Novelist.” Corporate America wonders momentarily at the sort of thing a ‘local fellow’ might produce, especially when this ridiculous radio show and/or its theater chooses to honor him, “Write anything I know?” The film rolls its eyes, “Dunno, wrote romantic things mostly… It’s F. Scott Fitzgerald.” “Ahh…,” Corporate America takes a drink from his water – neat – in a rock glass, “don’t read that romance stuff.”

At a variety of points such as these the film looks out at you in the audience, irritated. It wonders what makes you laugh, and how many copies The Great Gatsby would sell today. It doesn’t like your answers.

At very-nearly-the-end of the movie it is a few years after the end of the radio show, and a few of the main characters reconnect at a diner. Most of them may or may not be doing more or less the same thing with their lives, except for the youngish daughter of one of our singing sisters. She used to write poetry about suicide, sulk, and avoid wearing all black on the mere technicality that her clothes weren’t actually black colorwise. Now she is some denomination of importantness with cell phone and briefcase in tow, and she scolds her mother for spending $6,000 on a bus. She rushes in and out, gets her mom to sign a power of attorney, and only has a vague notion about what it might mean to have a conversation. The rest of the gang smirk, and laugh, and rib each other… and glow dimly from behind their eyes. Then the angel walks in again, and they begin gesturing at each other, wondering who she’s here for this time.

At actually-the-end of the movie, which takes place back at the end of that last radio show, everyone dances and laughs and sings, and no one gives a fig if this is the last show or not. As GK says, “every show is the last show.”