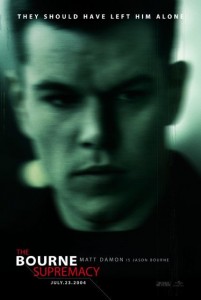 In honor of the continuation of the Bourne franchise

There’s a point in The Bourne Supremacy when Jason Bourne washes his hands in a scene that might seem absolutely unnecessary. It was at that point that I decided I could relax. I was by now relieved of my “sequel fear”, and more importantly I could stop worrying about Paul Greengrass’ first major effort. While I think Doug Liman more properly captured the feel of Ludlum’s novels, Greengrass chose a hyperkinetic, camera in motion style that also works, and in this particular version of such an attempt, that hand-washing scene is absolute gold.

Few people have been brave enough to attempt the “perpetual motion movie” since Altman perfected it in The Long Goodbye, and none have come close to pulling it off. The Bourne Supremacy doesn’t go so far as Altman’s work, but it comes close. The camera isn’t always moving, but when it isn’t there are going to be a lot of quick cuts. But while Altman’s purpose was to create an unsettling, unnerving, and even jarring experience (as is of course the aim of the style), Greengrass also adds a second purpose… he wants you to notice when it stops.

Plotwise, we don’t need to see Bourne wash his hands, not even slightly. But, in the midst of this lightning-fast ride, when we are given a moment to stop and look at Bourne wash his hands, it hits us that this is more of what the movie’s about than the chases and the espionage… looking at Bourne. That’s something that’s a bit more interesting in Ludlum’s novels, because Bourne is a darker, harder sort of bastard, but it’s nice that we’ve tried to save that to a real extent, as opposed to completely abandoning it to the Hollywood behemoth.

In our second installment, Bourne, two years past his previous adventure, is living in India with Marie. He still can’t remember much, but he has a lot of nightmares. Unfortunately, the demons of Bourne’s past are not all buried, and a final move of those in the shadows involves framing Bourne for a couple of murders that are very important to the C.I.A.. It also involves another attempt to kill Bourne in order to make things properly tidy. When that goes badly, Bourne has to again shift from hunter to hunted.

From there, and it’s almost assured by the inclusion of Franka Potente, the plot is not something that needs much explanation. Bourne travels from India to Italy to Germany, is in a lot of fights and car chases, and generally… well, runs. It works without much plot because, like the movie I keep hinting at, it has amazing sensibilities and throws in a bit of character during the chase. Perhaps most noticeably, it works because though Greengrass may have stepped on the peddle a bit more (the lack of a love interest angle making that partially mandatory), he kept to Liman’s general style and special-effect realism. Cars may crash, but that’s about all you can say about it, and that’s a good thing. It may be that cars actually flip over several times in real life, but that doesn’t keep it from looking ridiculous on film. 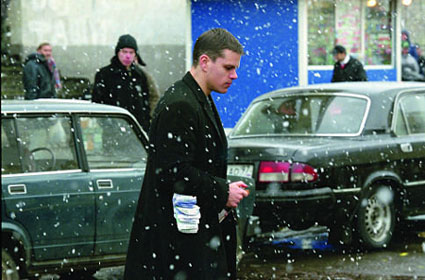 Part of what pushes Supremacy to that next level is that it makes a lot of dangerous choices and manages them all, at the very least, effectively. For a start, if you’re looking to fill seats, it’s a lot safer to make sure the cars flip over. Even for an action film, the hyperkinetic approach is a potential deathblow. The slight blue filtering found throughout a great deal of the film (following in the footsteps of the first) is a possible irritant, and though it’s largely quite well used, it’s as likely to go completely unnoticed. And, though a 65 year-old martial arts master once told me that while he could kill me without a rolled-up magazine, he could also kill me with one, it’s not exactly something you can casually sneak in your movie without worrying about it.

Supremacy gets away with these decisions because of its unrelenting narrative simplicity. Though there are quite a few complexities to what you might call the plot behind the plot, this is a movie that must remain straightforward if its going to succeed (or change directions altogether), and that’s just what Supremacy does. It doesn’t (except in one all-too-slow scene) bog itself down with explanation, repetition, and mind-numbing “pointing”.

During the film I was for some reason constantly aware of lesser versions and the direction they would take (possibly because they are so much the industry standard). Here we would have a five-minute scene to make sure we knew exactly what was about to happen, likely with Bourne making his way to a safehouse he had prepared in advance and assessing and reassessing his situation. There we would have at least two or three minutes of going over what’s happened already so that we can be sure no one missed a single detail. Supremacy is on the run, and though I might have taken this even a bit further, it doesn’t have time to hold your hand. 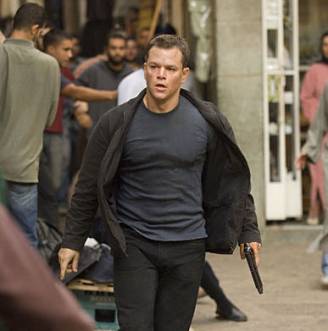 Working well within that framework, and it’s still surprising even though he worked in the last one, is Damon’s portrayal of Bourne. There are a few missteps, but overall Damon is even more acceptable in the role this time around. As the movie progresses into its dizzying pace, Damon’s subtle pauses (and not-so-subtle pauses) are well-played expositions rather than the mere fanciful plot ploys we might expect. Further, while many sorts of angry are fairly easy, angry at not knowing what you’re angry at is pretty tricky, and Damon manages it well.

Slightly troubling for the film are some of the supporting roles. Joan Allen is at best fairly serviceable. Though she isn’t supposed to actually be bad, she doesn’t manage to create the sort of interest in the counter story that Chris Cooper did so well in the first film. I’m not sure if it’s a completely objective lack of performance, or if I’ve just seen her in too many things like Pleasantville, The Ice Storm, and (I guess) The Notebook, but whenever she got mad it just didn’t ring true. Brian Cox is marvelous as usual, but his character is defanged from the start, and never regains any sort of menace we can really sink our teeth into, even when he’s sinking a knife into someone. Karl Urban provides a decent, though limited, anti-Bourne, and Julia Stiles is somewhat better than last time.

Ultimately, I liked this one slightly less than the first, but at the same time I appreciated a lot of what Greengrass was doing, and having my fears of his Bloody Sunday follow-up assuaged is worth quite a lot. This is not only the second time the franchise has given me a great movie, it’s also the second time it has given a favorite, lesser-known director a well-deserved opportunity with solid results. Liman’s effort worked just that little bit better for me, as did the availability of Potente as a reason for occasional breaks in the momentum, but Supremacy is nevertheless another superb effort.