There is a certain subtle message in About a Boy, though you probably wouldn’t expect to hear that. Oddly, it’s the same subtle message from one of the year’s other wonderful films,CQ. The message is a simple one. It doesn’t matter how much free time you have, or how much money you have, or even how many really nifty doodads fill your apartment (or spaceship), shag carpeting is just really cool. 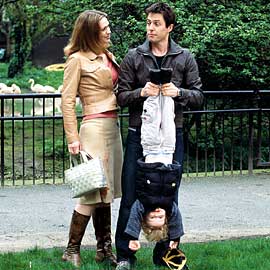 That’s about the only subtle message you’re going to get from About A Boy, but that shouldn’t be seen as a fault. Not necessarily anyway. Virtually every work of “classic” literature is pretty direct as far as the general message is concerned, and About A Boy is nothing if not direct. We start the story with the time-honored “No man is an island”, move on quite naturally to “some men are islands”, and end up with “no island is an island”. Not a terrible spin on an old standby. It’s not that I’m not an island, it’s just that islands aren’t precisely what you think they are.

Our story revolves around Will and Marcus. Will, the nearly forty, playboy slacker who doesn’t have to work, and isn’t about to pass up on any opportunity to not have to work. Marcus, the early-teen oddball whose mother, also an oddball, is seriously depressed. Will dates lots of women, drives a fab car, and has shag carpeting (or at least a shag carpet, white… the cool kind). Marcus gets picked on at school, sings aloud without realizing he’s doing it, and his apartment has non-shag carpeting (brown…need I say more?). Will is basically a hopeless, shallow loser, having and wanting no ties to anyone. Marcus is a fairly hopeless geek, with a mom gone round the bend, but he’s got a lot of heart.

Will, according to himself, is an island. He hasn’t much interest in anything or anyone, and one of his main theories of life is to avoid all problems by avoiding (in one respect or another) all people. No attachments. No responsibilities. No headaches.

While stumbling through what he looks at as his existence, he hits upon the idea of dating single mothers. His experience leads him to believe that single moms have a certain set of qualities that make them ideal for a man in his situation, or lack thereof. Following his theory, he stumbles into Marcus, though not by dating his mom. Marcus and Will soon become linked through nearly tragic happenings, and we are soon underway in what will become a curious and wild ride through their relationship.

Marcus pesters Will until the two get to the point where they have a standing reservation for watching television when Marcus gets out of school. Mainly (depending on how you look at ‘mainly’), for purposes of avoiding bullies. The two become fairly close, as we expect, but these are two people with a lot of problems, and neither has the remotest idea how to help themselves, much less each other.

Despite a few snags, About A Boy is pretty easily one of the best films of the year. One of those snags, though a small one, is Toni Collette as Marcus’ mother. She’s not bad exactly, but a few of the crying scenes go a little over. The point has been made, but we keep going. In some sense, that’s not her fault, but in another sense, at least part of it is. Also, she is trying (or being made to try) to look as bad as possible, and she is simply not a person I want to spend a lot of time watching look as bad as possible.

Another snag comes in a few of the scenes with Marcus (Nicholas Hoult). Overall he does a fine job, but a few of the scenes feel extremely acted. Can’t hold it against the kid much I suppose, especially since he really is quite good for most of the movie, and that includes a few scenes that strike me as being especially difficult for a child actor to pull off.

What is definitely not a snag is Hugh Grant’s performance. It is actually quite a treat just to watch the wonderful, and successful, effort he put into this role. Always one for the sly raising of the eyebrow, or the goofy grin, here he uses facial expression to deliver a character, not just the odd guffaw. His actions and reactions are in perfect synch with the role he’s giving us, and every line he has is delivered perfectly, or at least damn near.

It’s a film that has all its ducks in a row (even the dead one), and that’s a surprise in itself. The pacing is excellent (a special surprise to me, as I think that has been a problem with almost every Weitz film, even the ones where they can’t be held responsible), the acting cannot be commended enough, and the story is an interesting, entertaining look into these lives.

There is a scene that really starts off the final act in which Will somewhat suddenly stands up and walks out of a restaurant. The scene is given to us with something of a surreal feel to it. If viewed with the wrong perspective, the scene could come across as just a silly bit of fluff to move things along. Viewed in the right perspective, however, the scene is not only just great film, it really encapsulates the movie’s direction. Will passes through the restaurant door, and begins a spiral down into the terrible depths of self-realization. Coming to know Marcus as someone so utterly deserving of being liked, and thus coming to the conclusion that he himself is not, Will meanders toward some pretty serious suspicions about who the title is referring to.

About a Boy
Price: $9.49
Inventing a son got Will into a single parents support group, but rather than a fabulous new sex life, he found someone else’s very real son–a 12-year-old with a lot to teach about being a grown up. From the acclaimed author of High Fidelity comes this national bestseller that GQ calls Clever and winning .