There is something different going on in a “children’s story” in which fairies are said to “fall down dead.”  They don’t “go away.”  They don’t even “die.”  No, they fall down dead.  This something different has been abandoned by film and stage attempts at Peter Pan for so many years that the spirit of the story has been diluted into near meaninglessness.  As an aside, the most recent film adaptation (2003 – directed by P.J. Hogan) makes great strides toward recapturing the heart of the matter. 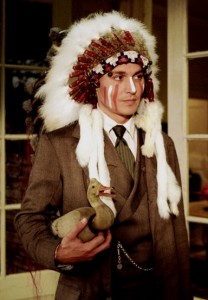 You see, when a writer has a flying, eternal boy tell you that if you say you don’t believe in fairies one will, of all possibilities, very specifically fall down dead, he’s after something.  That something isn’t quite along the lines of… “Oh, shant we all do a bit of believing. Assuming, of course, we haven’t got a few more important things to do, and if we happen to remember, and it isn’t too much trouble. Bit of a lark really… I mean, if you want to… no pressure.” No, it’s obviously a bit more along the lines of, “BELIEVE!”

At the end of Peter Pan (the book, but few treatments of it) there is no way to envy Pan, because though he has managed to teach Wendy (a name attributed to Barrie, just fyi) his lesson, he is unable to learn it himself. It is a story about the crush and destruction of reality and the inability to effectively escape it by escaping it… completely. Reality ought to be avoided when possible, though not, perhaps, left. Fantasy is not something we might indulge in if we happen upon the opportunity, but something we do or die. A guy who delicately weaves that into a tale of adventure, and a more typical (to us anyway) coming of age analysis is a guy I find interesting.

Enter Finding Neverland. The story of Barrie’s life, or at least the events that contributed to the creation of the Pan, Finding Neverland is a brilliant depiction of Barrie, even if liberties were taken insofar as historical accuracy is concerned.  Exact events, in a film such as this, do not concern me nearly as much as the fact that I feel I’ve been introduced to Barrie.

We enter the film in turn of the century England, and though Barrie (Johnny Depp) is already quite a popular playwright, his current opening night is a miserable failure.  His friend and financier Charles Frohman (Dustin Hoffman) needs another play, and one that will make up for the loss.  While writing in the park, as is his wont, Barrie meets the Davies family.  A friendship develops with Barrie indulging the four Davies children in some fantastical play, and enjoying the company of the widow Davies (Kate Winslet).  As events unfold, Barrie and the Davies family grow closer, and Barrie pieces together an idea for a new play.  By spending time exploring the minds and perspectives of some rather special kids, Barrie builds a new world.  When young Peter Davies reveals that he’s had far too much reality, and has done far too much growing up, a fantasy about never growing up is born.

A good deal more happens, but it doesn’t really matter. Tension mounts, for obvious reasons, between Barrie and his wife. Barrie meets with some resistance when he tries explaining the vision of his new play to money man Frohman (it’s about fairies?). None of it is especially pertinent to the film because its goal is not to show you Barrie’s life, or parts thereof, but to show you Barrie.  The story of how another story was developed is only slightly interesting, and hardly worthy of even a PBS special.  Relating the somewhat more transcendent idea that Barrie was, in some sense, magical himself is (pretentious, sure) worthy of a film, and at the same time something that negates the relevance of the plot in itself.  It’s not what happens. It’s who happens.

It also quickly becomes – who else happens. Who else is Johnny Depp. As mesmerizing to ponder as the Barrie he delivers, Depp shines in a way that nearly becomes detrimental to the film. The gulf created between whatever it is Depp is doing and the arrival on scene of someone else who is merely ‘acting’ hammers at the audience in a way that is, at best, seriously distracting. The precision of the period-appropriate eloquence is itself worth the price of admission. 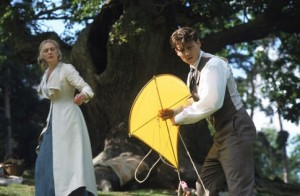 As much as I would like to give the lion’s share of credit for the film’s near brilliance to Depp, I believe I must dish that up to Marc Forster’s direction.  He didn’t move me as much as some with Monster’s Ball, but his effort here reveals a style and intuitive frame that may one day render his films as easy to identify by ‘feel’ as Altman’s.  Together, Depp and Forster move well beyond the only slightly above-average screenplay by unknown David Magee.  Based on the play The Man Who Was Peter Pan by Allan Knee (which is not as maudlin), Magee’s screenplay overindulges frequently.  This is perhaps the true test of Finding Neverland, or perhaps the fire that tempers it, because in this case (luckily) the play is not the thing.  For Depp and Forster to deliver despite some missteps inherent in the material renders them both the more enjoyable. (It doesn’t make perfect sense even to me)

In the end, Depp gives us a Barrie clearly identifiable as a man in love with believing.  A man who would not be out of character saying, “You don’t see what I see.”  Possibly even a man capable of sentencing fairies to falling down dead.  Nevertheless, a man who, if he doesn’t precisely believe in fairies, believes in believing in fairies.