He Loves Me… He Loves Me Not is a movie with a gimmick, but one where the audience should pay no mind to that gimmick at all.  As we might expect, it’s a movie about a person with a love problem. We open with Angelique (Audrey Tautou) in a florist shop.  She searches out the perfect rose, and proceeds to beg the proprietor to deliver it to her boyfriend. Tautou’s signature cute and perky smile being showcased perfectly.

We soon discover that Angelique’s boyfriend Loic (Samuel Le Bihan – Brotherhood of the Wolf), a cardiologist, is married.  Angelique’s man trouble plays out in sad fashion.  He says he’s leaving his wife, but she’s five months pregnant.  Loic and Angelique steal away here and there, but he often stands her up.  Quiet getaways go unrealized, and eventually a week-long trip doesn’t manage to materialize either.  Through it all we watch Angelique battle her emotions, fight to stay optimistic, hold on to her faith in Loic, and finally become enraged.  Her friends become increasingly worried at how she is taking things, and how she is letting this man treat her.  One of her friends is interested in her romantically, and he rages internally at both Angelique for not recognizing her situation, and Loic for using her.

At about the 45 minute mark, the movie rewinds all the way to the flower shop, and we start again.  This time, we see things from Loic’s point of view.  This is our gimmick.  Now we watch the events we are already familiar with, but we see what went on as Loic sees it.  It’s a gimmick made meaningful though, because the story could not be told without it, and the movie couldn’t get where it wants to any other way.  It also avoids being a fairly useless device just for the sake of using a device (see Rules of Attraction), because the movie is leading us places by way of the device.  It serves a serious purpose, and it saves itself from any negative connotation to the word ‘gimmick’, because it isn’t too hard to see it coming.

It’s pretty obvious that this isn’t going to be a movie that is really about love. It’s not even really about how the two characters act, react, and see things, though that is perhaps the surface display.  It’s about how we react, and see things.  It’s not terribly interesting to prove that stories are going to be different depending on which side is relating events, but when they are this different it’s not only interesting, it’s pretty shocking to realize what we were thinking when listening to the first side. 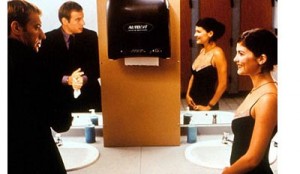 Eventually, the rewind catches up to where we left off, and we continue the story.  The movie manages to build some serious tension, because now we’ve had things kicked out from under us, and we aren’t sure what to expect.  The best part of this tension is our fear that an actual innocent (a further innocent really) might get mixed up in things, and for the exact same reason we were thrown off course.  He doesn’t know both sides of the story.  He is, in effect, a subtle, sleight-of-hand breaking of the fourth wall, because he’s us.

He exists in the story such that he goes through things from something very near the audience’s perspective.  Wondering what he may be moved to do, armed with only the information we used to make false assumptions and put together false beliefs and unjust attitudes, is all the more moving because when/if he does something, we know in the back of our mind that we would have cheered not long ago, and it is coldly disheartening to be wrong in the way this movie makes us wrong.

Audrey Tautou is the perfect choice for this role, and she lives up to any conceivable expectations.  Her flighty charm, her cute and disarming good looks, even her mere camera-friendliness, suit the role, and she is as good here as she has ever been.  Samuel Le Bihan is not quite so good, but he is up to his usual standard, and a great choice.  He puts together something that reminds a bit of Depardieu, but of course Depardieu is not, well…, good looking.  Le Bihan, however, manages a smartly expressive character, one with sideways glances, puzzled squints, and emotive deliveries that serve in retrospect (as they are intended), without overplaying initially.

Writer/Director Laetitia Colombani has only one other credit, and that a short, but there is master class work going on here.  The scenes are uniformly gorgeous, the compositions are actually noteworthy, and the script is, even if not truly the most complex of work, ingenious.  The dialogue, for the most part, plays out brilliantly, highlighting nuances of conversation that build our characters.

Cinematographer Pierre Aim deserves a great deal of credit, and judging from the overall look we can assume that our virgin director was content to lean on the more experienced Aim, and it was a good decision. It’s a surprisingly visual feast, though it didn’t necessarily need to be, and I am grateful for the extra effort.

He Loves Me… He Loves Me Not is yet another Tautou movie that has little one can find fault with, and if her ability to find her way into wonderfully entertaining, well-crafted films continues, she will eventually be one of the all-time greats.  This is a movie where one is especially wary of giving things away (and I have probably given away too much already), and not because you might figure out ‘whodunit’, but because the movie casually manipulates you into working for it in order to achieve (hopefully) its ultimate goal.  A goal which has nothing to do with who dun what, but what you dun.

This review was originally published in 2003