Gran Torino is a film that is going to stir up a lot of talk about racism, and there are going to be a lot of people remarking one way or another about Clint Eastwood‘s “racist” character, Walt.  One way or another, that’s going to be good for business.  People are either going to say positive things about Walt’s eventual rise from his thoroughly racist views, or they’re going to be really mad at the fairly light-hearted treatment of a guy who is a raging bigot.  It doesn’t matter which side they’re on, or if they’re somewhere in the middle… talk equals sales. 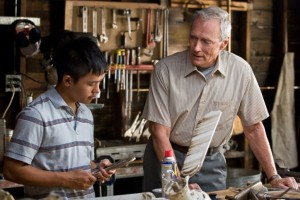 The odd thing about the whole affair is that Walt isn’t a racist, and it isn’t what the story is about anyway. The idea of racism is that one acts, thinks, or judges (or whatever) based on race.  Being on the good side of racism means you do not take race into consideration.  Being on the bad side means you do.

The trick in Walt’s case is that liking irrespective of race is not different from disliking irrespective of race.  Walt hates everyone.  Sure, he’s a walking thesaurus of racial slurs, and he’s going to throw them out every chance he gets, but he distributes them to all races equally.  In fact, he doesn’t stop at race by a longshot, though that’s where we notice it.

Really, Walt’s problem is that he hasn’t found an appropriately offensive slur that he can direct at everyone.  There isn’t a “person” cuss word, and walking around saying, “stupid bastard,” doesn’t sufficiently relate your level of dislike for everyone and everything.

Walt doesn’t really see race in any sense that’s different from saying he sees eye color, hair color, or unattached lobeness.  He’ll find a way to throw a slur at you if you’re any color at all, including white, and if your color, heritage, and religion are the same as his, it won’t stop him for a second.  If he is rightly called prejudice in any sense, it is not against any particular feature of the person he’s aiming at, but the mere fact of “existing at him.”  He’s a speciesist.

But, like I said, it isn’t what the story is about anyway.

The movie opens with Walt at his wife’s funeral.  He’s acting especially cranky, and throwing around an oddly snarled grimace at everyone.  Well, his wife died recently.  But no, his kids are there to explain to us that he’s always been like this.  Always.  Through the funeral and wake, we are quickly given to understand that Walt doesn’t get along well with his family, and he apparently makes a great effort not to get along with anyone.  He’s haunted by something about his time serving in Korea, or just the experience in general, and he is fairly standard post-war character material.  He’s really an ass, but he lived through some shit, and frankly, you didn’t.  You probably think you did, and that’s probably a lot of the reason he doesn’t like you.

The neighborhood has slowly turned Asian, and while crotchety, old jerk Walt sits on his porch asking the elderly, crotchety woman next door, “Why did you have to move here?” she in turn asks, “Doesn’t he know all the white people left?”

Things get rolling when one of Walt’s neighbors, late-teen lad Thao, is mostly forced to join up with the local Asian gang.  His initiation is stealing Walt’s mint-condition 1972 Gran Torino.  The attempt fails when Walt very nearly catches Thao in the act.  The thugs keep showing up to give Thao another shot, and when things get a bit violent Walt steps in.  As the story progresses, Walt is gradually, and with much resistance, pulled into Thao’s family.  Before long, Walt is trying to find ways to help Thao through life.  But, whatever Walt and Thao might theorize, the fact remains that the gang isn’t going to leave Thao alone.  The film ushers us along toward some manner of inevitable showdown, and we get there.

The explanation by way of what I consider a very simplistic, surface-oriented viewing of the film is that the racist blinders slowly come off as Walt is forced to spend time with people of another culture.  He learns that people are just people, and there are some worth liking of every race.  Walt transforms because he has learned not to hate based on race.

That isn’t what happens.

Walt calls Thao “Toad” and “stupid gook” to the very end.  He doesn’t actually “slowly warm” to spending time with his Asian neighbors.  He walks in and enjoys the good food and free beer right off the bat.  He calls them “slants,” but he sits right down with them and is perfectly happy in their company.

The Korean War comes up every time you turn around in this movie, and in some very telling ways.  Walt can’t stop referring to it as some major part of who he is for a start, and the movie shows us the fact of the matter several times as well.  That Walt always has his company lighter on him is a start, but it’s the easy version of attaching Walt to his past.  But, consider a guy waking up in the middle of the night to discover someone in his garage trying to steal his prized car.  When that guy goes to a locker and looks past several handguns to go through the somewhat complicated affair of loading his service-issue rifle… that should tell you something about who he is.

Toward the end of the film, Walt breaks down and goes to confession.  He actually opens up a little bit (but he’s in a hurry), and tells the priest who has been hounding him throughout the film about something that has really bothered him for a long time.  Something he feels really bad about.  The priest is surprised to hear that it isn’t about his time in the war.  He doesn’t say anything about the war.  He says  he didn’t know how to do something.  If we’ve been paying attention we know why he didn’t know how to do it.

That’s what the movie’s about.

Walt isn’t a racist.  He’s just a bastard.  When he lets himself become rather chummy with Thao, and begins to invest in him, he isn’t any less a racist than he was at the beginning.  He isn’t really any less of a bastard either.  He just doesn’t hate himself as much.