The main problem with The Last Samurai is not that the plot is almost exactly the same as both Dances with Wolves and Shogun, but that it assumes you’ve seen both those movies, and can’t seem to decide whether or not it thinks you want to see them again.  If you’ve seen both the full ten hours of Shogun, and the version where the mini-series is reduced to approximately the length of a feature film, you’ve got some idea of what’s going in The Last Samurai, and you know that somehow the whole point is lost in the trimming. You might similarly imagine the version of Dances with Wolves that has an hour or so cut out of it. 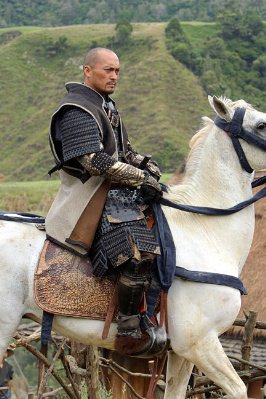 Now, if you haven’t seen either of those films things get a little harder to explain.  Imagine a book whose main purpose is to explore a culture (to some degree or other) by way of having an outsider suddenly thrust into it.  Now imagine that instead of actually having a book like Shogun, with all its details about the culture relayed through the story and the character, you only have the Cliff’s Notes of the book which just says, “and he explores and comes to know the Japanese culture, and the ways, ideas, and ideals of the Samurai.” It’s left to you then to either be able to get something out of that line or not.

Even all this doesn’t get you to the point that you can really connect with where The Last Samurai is going, because though Dances and Shogun weren’t true stories, there was a decent ‘truth’ in them. They were fictional stories that attempted to take place in real times, and portray cultures (to some extent) as they really were.  The Last Samurai is one step removed here, because it isn’t a fictional story in that sense.  The historically incorrect things Samurai does are enough to change the entire situation of Japan itself, and change the entire culture to a degree. We’re not across the line into something like alternate-reality sci-fi, but we’re approaching it.

The result is still a trip into the world of Samurai, but it’s a trip that says, “you’ve already seen Shogun, so we don’t need to go into all that again, and we’re going down this other road anyway.”

All that said, there are only two things keeping this movie from being not only five stars, but also an instant classic; it’s ending (and I mean the entire last thirty minutes), and its absolute lack of daring. Instead of ‘daring’, I might actually say its lack of honor (to itself), but that is a jaunt toward irony I choose to avoid.

You probably have a good guess at the story based on the comparisons I’ve made, and you can’t be far off.  Captain Nathan Algren (Tom Cruise), veteran of the Civil War, and many skirmishes with Indians, is hired to go to Japan and train an army.  He learns that he is there to put down a certain Samurai, Katsumoto (Ken Watanabe), and his followers.  Pressured to lead his new troops before they’re ready, he is captured by Katsumoto in the eventual miserable rout his ‘army’ suffers.  He spends a long winter with Katsumoto and his family in a small village, because Katsumoto wants to ‘know his enemy’.  Once we get beyond how Algren finds his way into the Samurai world, Shogun takes over, complete with a Japanese woman he can grow to love, and surprise night attack by Ninja.  From here we mix equal parts Dances and Shogun, choosing those elements that best serve the scenario we’ve created, and we have our plot. 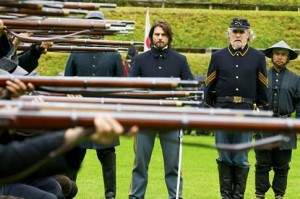 These three movies may have another connection, because if Kevin Costner, Richard Chamberlain, and Tom Cruise ever did anything right, it was their respective roles in these movies.  I’ve never been a Cruise fan, and even now he feels like an odd choice for the role to me, but he manages it far better than I’d have predicted he could.  That’s not to say he’s perfect.  There’s still quite a bit of the Hollywood star coming through in his performance, but he’s not horrible, and certainly delivers something at least more watchable than his norm.

Ken Watanabe, on the other hand, is wonderful. He delivers a quiet power, and undeniable presence that make you wish all the more that the film came through on its potential.  There are a few brilliantly crafted scenes in which Katsumoto is in the background, off-center, and not exactly doing anything.  He is still the absolute center of the scene, and your attention.  It’s hard to avoid the natural comparison to Shogun here, because though they are very different characters, Watanabe is basically playing Mifune’s Shogun role.  That’s the sort of situation where a comparison can spring to mind unbidden and wreak unfair havoc with your impression of an actor’s performance.  Not so here.  While Watanabe isn’t quite going to stand up to a real comparison to Mifune, he’s strong enough to at least make such a comparison a respectable question.

Mentioning Costner, oddly enough, leads me to the cinematography by Oscar-winner John Toll.  That’s because Samurai reminded me so much of James Muro’s first effort earlier this year, Open Range.  From a cinematography stand-point, they’re practically the same movie.  They’re beautiful, but it’s a very easy sort of beauty.  Panoramic views of rolling plains and hills, sunrises with a hint of cloud cover, and sweeping shots of virgin forest, are not exactly on the cover of “What’s New and Exciting in Beautiful Pictures Monthly”.  It’s gorgeous, sure, but it’s not exactly doing anything.  The difference is that when you’re making a fairly simple cowboy film whose greatest asset is the fact that it doesn’t take itself too seriously, that’s just the sort of thing that works.  But, when you’re making a semi-massive epic that puts itself out as having some definite goals, and definitely takes itself very seriously, well…, then it’s just a giant-name cinematographer cashing his check and going home early.

All of this likely gives an impression which makes my rating confusing.  I blame that on expectations, and perhaps a slightly unusual version of them.  The mediocre hopes I had for this film built to high hopes as the movie actually progressed before my eyes.  At about the halfway mark I was very hopeful indeed.  I mentioned that there were two things keeping this from being a five-star movie, and this is where those come into play.  It has no real daring to it, even though the first half will lead you to expect some.  Once we’re a certain amount of the way in (and even before that really, but you tend to overlook it in the earliest stages of a film) we realize that everything is given to you in the simplest possible terms, with the least amount of effort, as ‘easily’ as can be managed.  The other thing keeping the movie from being five-star status is its deplorable ending.  An ending that is so typically Hollywood that it does its best to negate all that comes before it.  It’s stagy, and manages to avoid being described as ‘formulaic’ only based on the uninteresting technicality that no one’s used the formula before. 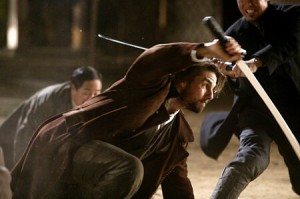 Still, I’m probably giving a very negative impression of everything to do with this movie that I give four stars (out of five).  I focus on the negatives, because far too many people are going to sing this movie’s praises far too much.  It doesn’t really deserve many nominations, much less the wins it’s somewhat likely to receive.  Nevertheless, it’s still above-average in my opinion, and though it has a lot going against it, it has a lot going for it as well.  Cruise isn’t great, but I have to admit that he isn’t bad, and Watanabe alone made it worth it to me.  It’s certainly entertaining, and has some decent action moments that are actually relevantly connected to the plot.  I may have said that it’s an ‘easy’ sort of beautiful, but that doesn’t negate the fact that it is actually beautiful. It even has a pretty good story.

The end result is that I think it’s worth your money at the theater.  It’s greatly disappointing in ways, but it’s the kind of disappointment that can only come from having such great potential.  I’ve always been easy on movies that try to do something excellent and fail, and I’m not of a mind to change that now.  I should qualify that, because the question of whether or not the creators were actually trying to do something excellent (as opposed to something that would win awards) is open to debate, and frankly, I’m not sure which side I’m on. Whatever the case may be there, let’s just say that something excellent almost happened.

At the end of the movie, Captain Algren has a final conversation with the Emperor of Japan that curiously relays my ultimate feelings on the movie.  The Emperor asks Algren to do something, and Algren responds by telling him to do something else.  It’s actually a great line, though it is a line that only fits a far better version of the movie. The conversation fits my feelings about the movie, because I thought this was going to be a movie about Algren’s response, but it turns out it was only about the Emperor’s initial quesiton.

note: I put this review up as a result of somewhat popular demand.  This was originally published in ’03, and is the review that was used in a University course.  Yes, people have actually been forced to read this review.

Last Samurai (2-Disc Widescreen Edition)
Price: $10.91
Set in Japan during the 1870s, The Last Samurai tells the story of Capt. Nathan Algren (Tom Cruise), a respected American military officer hired by the Emperor of Japan to train the country’s first army in the art of modern warfare. As the Emperor attempts to eradicate the ancient Imperial Samurai warriors in preparation for more Westernized and trade-friendly government policies, Algren finds himself unexpectedly impressed and influenced by his encounters with the Samurai, which places him at the center of a struggle between two eras and two worlds, with only his own sense of honor to guide him.