It’s been a long time since I was so torn over a series premiere.  United States of Tara stars Toni Collette and John Corbett, and features multiple personality disorder.  I should probably mention Diablo Cody as part of the cast, because a writer has never been so prominently displayed in a show’s hype.  I’m torn because the show plays out rather horribly actually, but I’m still intrigued. 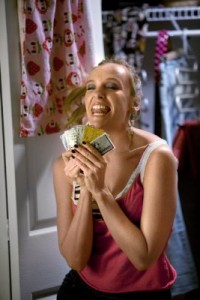 Toni Collette is Tara, but of course, she’s also Buck, and T… at least so far.   The fairly bizarre premise of the story seems to be just a jumpoff from some party-game style, weirdest premise generator where the question went like this, “What if you had a family with a mom who had multiple personalities, and her family said, ‘Well, whatever.’?”

That’s obviously a very strange game, and it’s a pretty legitimate question as to whether it’s the sort of strange game that makes for interesting television.  While the show has a lot of problems, it also has a lot of possibilities. Sucking me in so far are the varying reactions of Tara’s family to her different personalities, including (I guess) the real one.  The show begins with Tara telling us (through her video diary) that she found evidence that her teenage daughter is having sex.  Throughout the show said daughter is confronted on this score by her father, Tara, and Tara’s male personality Buck.  Buck is an odd vision of obnoxious redneckness, who apparently makes the family rather uncomfortable.  These three conversations, brief though they may be, and the various reactions and responses built into them form interesting looks at relationships in general.

The uniquely curious situation, and the setup of the family who just plays along with the whole thing is intriguing.  At this point, however, things do not actually play out that well.  We’re told that we’ve been running with this for 17 years, but it’s rather hard to believe given what we’re exposed to in two days.  We may have speakers in the backyard to drown out the noise of… whatever happens in the shed… but, it’s hard to imagine we’ve just been merrily rolling along for almost two decades. 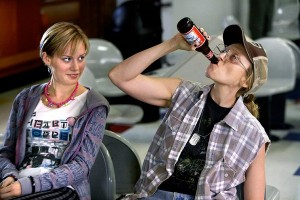 The most problematic aspect of the show is that I’m just not all that convinced by Toni Collette’s performance.  I found myself able to go along with Tara, but her “alternates,” as the show calls them, didn’t do it for me at all.  They were very stagy, and that might actually have been a specific decision, but it is hard to avoid distraction as an audience.

While some of the conversations were decidedly interesting, and put together with equal parts charm and daring, others simply rang false.  Clearly, Tara is going to have to talk about her alternates in some way that lets us into this world.  We’re the unitiated.  We have to get some grounding, and in some sense she has to talk to us as though we haven’t heard the whole thing over and over.  But, she talks to her husband as though he’s new to the game as well, after we just learned this has been going on for 17 years.

It’s always a tough call when you’re trying to decide where to fall on the explanation spectrum.  How much do we have to lay it all out for the audience?  To what extent can we just go and let them figure it out?  United States of Tara goes the wrong direction on that score, and several times in the premiere episode alone. 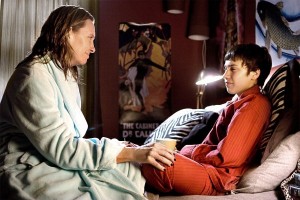 We’re in a similar situation with an odd, and uncomfortable conversation between Tara and her son.  While the general relationships that surround the tween son who has apparently taken over a somewhat motherly role are ripe for covering great ground, this particular conversation was almost silly just in how out of place it felt.  Just because you are only just tuning in, doesn’t mean that Tara suddenly woke up with this affliction, and clearly everyone in the house is quite used to the whole affair.  This conversation stuck in here for no reason apart from poking the audience with an emotion stick is a real stumble for the show.

As I say, I’m definitely torn.  It was hard to sit through, and it has more problems than I would normally let a show get away with.  Incidentally, Corbett was surprisingly believable playing a character I have a hard time believing even in theory.  Despite the flaws, it’s hard not to want to know what’s coming… at least for now, and it’s probably worth a few more episodes before giving a definitive ruling.

Here are a couple of trailer reels, and an interview with Collette.