There’s a problem with life and relationships, and basically it is that they are in a certain sense opposed to each other.  Life is in some sense (and some may even find it to be the goal of life) about moving from particulars to the general.  That’s pretty much what we do in life, and (even if it isn’t the ultimate goal) that’s pretty much what we aim for.  We are only ever given particulars, but we speak, think, and desire (considering the right sort of desires) in generals. The more general the better, but at least as general as possible.  Even in speaking about people (persons) at all, we talk of how ‘they’ are, the general ‘thing’, and we don’t mean some collection of the particulars we actually know.  Life moves then from particulars to generals. 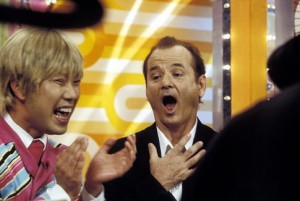 Relationships with people, quite to the contrary, move from generals to particulars.  When we first meet people, perhaps fall in love (or at least very serious like), begin a relationship, and come to have that most intense feeling of ‘young love,’ what we are engaged in is the sharing of generals.  At that stage, what we’re after, and what we hope to relay, is the general ‘us’.  The ‘who we are’ that somehow transcends who we are. And, we are not only getting the generals simply ‘of the person’, but also the generals ‘about the person’.  People who are ‘getting to know each other’ talk about the deeper truths they believe in, their generalized hopes and aspirations, and their ideals.  Even the specifics (the specific things a person says or does) are at this stage seen mainly as mere representations of the general, and not as the specifics we know they are. In short, two generals walk into a bar and fall in love.

But, relationships have a natural tendency (one that must be combated) to move ever toward the particular.  The ‘people’ we know, or fall in love with, are no longer really seen.  The generals have all been dispensed with, and now we simply pay attention to the particulars.  We’re all familiar with couples who divorce simply because they get bored with each other.  It isn’t the uninteresting concept it might seem. Particulars are boring.

The real meat of the problem is that (in quite a different sense) life is little more than the relationships we have, even if the only one we have is with ourselves.  It becomes a pretty sticky situation now, and if we’re aware enough to realize these two points, things can become rather ugly if we see that all the ‘general’ has gone out of our relationships, because then it has largely gone out of our life.

There are only three movies (I can think of) which truly grasp these concepts and attempt to relay them to some degree or other.  One is Richard Linklater’s deplorably under-valued Before Sunrise.  The other two are Sophia Coppola’s two efforts: The Virgin Suicides, and Lost in Translation.  I should note that this is not precisely a main concept in The Virgin Suicides, and moreover it goes the idea one further by involving people who do not even meet at all. 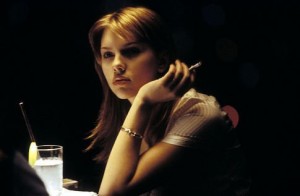 Lost in Translation is the story of a few weeks in the life of Bob Harris (Bill Murray) and Charlotte (Scarlett Johansson).  Bob is a middle-aged actor who is in Japan to collect a quick endorsement check.  Charlotte is a recent college graduate, with a philosophy degree no less, who is in Japan because her photographer husband has a gig there, and she has little else to do.  Bob’s marriage (to make my job easier), and his life have moved entirely to the realm of particulars.  His conversations with his wife are difficult to distinguish from those of disinterested roommates.  He isn’t sure why he’s doing any of the things he does (or even if he’s doing anything in any relevant sense), and he’s lost even the relevant second-order desires (He’s not sure if he even wants to want anything.  He doesn’t much care that he doesn’t much care).

Charlotte, on the other hand, is not only just becoming aware that her relationship with her husband is moving toward total particularity, she is also just getting a full appreciation of the importance of generals. “I don’t know who I married,” is not the trite, cliched bit of dialogue it might appear.

Bob and Charlotte repeatedly bump into each other, mainly in their hotel’s bar, and in rather a genuine manner they continue to meet each other for the rest of the film.  They soon spark up a relationship which leads to their being together quite a bit, and thinking about each other even more.  They sing surprisingly well-chosen Karaoke songs, bounce from club to club, and watch TV they don’t understand in their hotel rooms.  Of course, their particular connection cannot be overlooked.  They couldn’t just be any two people with similar life circumstances.  They definitely come to the main portion of their attachment for each other because they are these particular two people.  But, their attachment is also based on their being these two particular ‘general’ people, as well as the mere fact that they relish in the generality… in general. They are drawn to each other as people, ‘people’, and ‘kinds of people’. 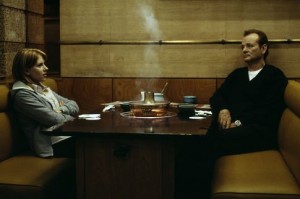 Bill Murray and Scarlett Johansson both deliver amazing performances.  That Murray stands out next to Johansson (apart from striking me as an odd thing to say given where each is in their respective careers) is a testament to each of them.  Murray delivers his world-weary, battered soul a bit better than Johansson delivers her astute, world-feary one, but it is perhaps as much because the one is so much more familiar to us.

It would be difficult to give too much credit to Sofia Coppola, whether we’re looking at her writing, or her directing.  The tone, overall, is somber, but in such a way as allows for playfulness.  Shifts in mood are related visually, without being forced upon the audience, and Coppola’s style never forgets the main issues, even in the most mundane, or most potentially cliched moments.  What a character is doing is never left to stand alone, but is always reinforced by how they are doing it, and founded on another level of ‘that they are doing it’.

The writing (one of the many surprise wins by those who deserved to win this year), particularly the dialogue, is often reminiscent of the beauty within Before Sunrise.  It is often not so much what is said, but what is said within the context of the ‘point’.  The clear presentation of how we are so often attempting not to say particular things at all during these early stages, but are instead attempting to convey the general. “It’s not that I’m saying this, it’s that this is the sort of thing I say.”

More importantly, this is how we are apt to receive these particulars in any case.  During the course of the movie there is much (both in terms of dialog and character action) that could easily be directly copied into a different movie, and there it would be seen as just the sort of particulars which cause frustration, irritation, and boredom.  Here, the aim and the lenses show the beauty of the general.

At the end of the movie, one may easily view things in terms of a very particular thing which Charlotte did not, in one sense, gain.  But, ask yourself what Charlotte gained in general.  Indeed, who she gained in general (and there are two referents to that point).  Any specific particular she didn’t gain wasn’t exactly relevant to begin with.  In exchange for not gaining it (if it is an exchange, and it isn’t), she now has not only a perfect ‘general’ (never to be particularized), but an appreciation for the general, and moreover she has largely reinvented her own ‘general’. The old line says that great poetry contains more information than the collection of words can possibly convey in itself.  Some would say that huge volumes could be dedicated to the content of a few lines of poetry.  Likewise, some events contain more life than can be thought to exist merely in the acts which comprise them.  Some events are entire lives in themselves.

At the end, Charlotte smiles.

I encourage you to read this again, even if only for a few seconds.

Lost in Translation – Widescreen
Price: $9.99
After making a striking directorial debut with her screen adaptation of The Virgin Suicides, Sofia Coppola offers a story of love and friendship blooming under unlikely circumstances in this comedy drama.