In Whit Stilman’s Barcelona (a movie I love, but can’t quite call ‘great’), Chris Eigeman’s character wonders about sub-text. To paraphrase – Everyone’s always talking about the sub-text, he says, but what’s the stuff that’s not the sub-text? The text, comes the quick reply.  I faced a similar sort of dilemma at the end of M. Night Shyamalan’s effort The Village. Where, I wondered in something of a daze, is the bloody text? 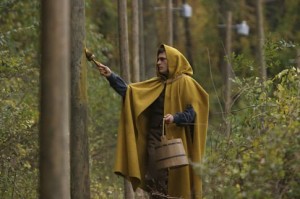 Shyamalan has already proved himself a master of mood, and more importantly, a master of ‘the long and winding road of your thoughts at movie’s end’.  The Sixth Sense and Unbreakable were not simply movies with ‘surprise twists’ at the end, they were movies with calculated revelations at the end, and ones which spurred a rapid-fire reexamination of all that you had seen before. It was not of the same kind or caliber in Unbreakable, but interesting nonetheless. The Village doesn’t really have a twist at the end. It has a twist at the start of the third act, and as we progress toward the end we get more and more information about that twist. The problem here is that the twist is silly, and its only purpose is to develop the sub-text. I hope I’m not being too generous in seeing that sub-text, but without it there is nothing to the film at all.

I won’t tell you much about the film, because to give just about anything away is to give everything away. On the other hand, the effect would ultimately be similar to telling you beforehand that Jack and Chrissy simply misunderstood what they heard, and Janet isn’t really…, well, whatever Janet isn’t really doing this week. The titular residential area is something like an Amish community. Removed from civilization, and living a circa late-1800s life, those in ‘the village’ are a simple folk, just living out their simple lives. What makes this community curious is that their village is surrounded by a dark and mysterious woods inhabited by strange creatures known only as ‘those we do not name’ (or ‘speak of’, or ‘raise our fists menacingly towards the woods at’, or whatever). Our villagers have long ago come to a truce with these creatures such that the villagers do not go into the woods and the creatures don’t come into the village. Some manner of meat tithing ritual apparently accompanies this relationship, and despite the elders’ trust in the arrangement, the villagers still man watchtowers throughout the night. 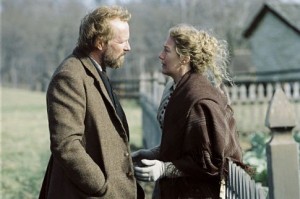 We progress through the film by simply getting to know the stale and lifeless characters set before us. With the possible exception of Bryce Dallas Howard’s Ivy, the entire pumped-up cast is laughably wasted to stock, hollow shells of characters who were cardboard cut-outs in their best incarnations. Adrien Brody’s performance is wonderful, but it’s a wonderful performance of a tired cliche which fills an imagined void. The story eventually comes down to the same issue all stories taking place within ‘isolationist’ communities come down to – going to civilization for medicine. It falls to Ivy, who’s blind by the way, to undertake the journey to ‘the towns’ in order to save someone who was injured.

The first 40 minutes of the movie lays a solid foundation, delivering some real mood and tension, but Shyamalan has made an error in calculating what he’s actually good at. Mood and tension are not a story, and his stories aren’t stories to begin with. Shyamalan has managed his efforts in the past by forcing interest and involvement in his characters. The Sixth Sense works, not because the pure story is particularly spectacular (it’s not), but because the audience becomes invested in the characters, and that investment is sharply and suddenly rearranged. The Village offers no one worthy of investing in, and even if you did, the reveal doesn’t change that investment, it just calls you stupid for having given it. But, that’s neither here nor there in any case, because that’s not where The Village is trying to go. The Village wants your investment to be in the story, and that’s not a game Shyamalan is qualified to play.

The Village is littered with sub-text, and almost as though it were his new joke, the twist (if it can even be called a twist) solidifies what you would have to call the ‘sub-text that’s really there’ mainly by way of contrast to Shyamalan’s earlier efforts whose twists solidified the ‘text that’s really there’. It’s a somewhat clever, if much used, sub-text involving the escape from the duplicitous and manipulative ‘evil society’ by way of creating our own smaller version of same, but it’s a boring, almost crass, display of such a sub-text. ‘Display of sub-text’ is an inherently flawed turn of phrase, or at least it ought to be, but it fits all too well here. That’s the short summary of the flawed nature of Shyamlan’s effort, because at the end of the day he’s not saying what he’s saying, he’s saying what he wants you to get out of what he’s saying. The Village plays out like the movie version of a conversation with a person who follows everything he says with, ‘Do you see what I mean by saying that?’ 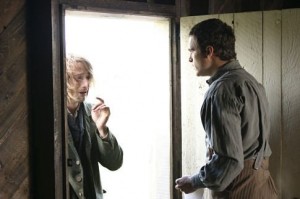 Knowing (and for the most part appreciating) Shyamalan’s early films as I do, I made a concerted effort to learn as little about The Village as possible. That’s a choice that was made decidedly easy for me. The film’s trailers didn’t want to tell you anything about it, and it wouldn’t be hard for someone to make it all the way into their seat at the theater without knowing that the film stars: Joaquin Phoenix, Sigourney Weaver, and William Hurt (as well as the others I’ve mentioned already). This is partially due to the film’s most annoying feature – it relies entirely on the fact that it is an M. Night Shyamalan film, and it wants you to do the same. It works to a degree, because you muck your way through the first half of the film without complaint. Had the movie been made by anyone else you’d probably leave somewhere before the first hour was over. The movie can’t get you to invest in its paper-thin characters, and it doesn’t even have a story it can hope you’ll invest in (the entire story is the short paragraph ‘sell’ summary that gives everything away), but the first hour passes by and doesn’t seem too bad, because you are willing to invest in Shyamalan. “We’re going to find out something that will make it all worthwhile,” you tell yourself. It’s a lazy, unfortunate sort of trick, and one spawned (I suspect) by reading one’s own press. The Shyamalan who made The Sixth Sense couldn’t have made this film for obvious reasons, but that Shyamalan wouldn’t have made this mess either.

As an utterly mindless sort of escapism, The Village perhaps has something to offer. It has moments which take advantage of the semi-psychological scare power Shyamalan manages to create with his somber mood and tactile sense of dread, but even at that level the movie will only get you so far because nothing ever coalesces into anything. There’s a lot of ‘that which might be revealed’, and the nervous tension that goes along with it, but The Village is a movie about learning secrets where the more we learn the more we wonder how anyone could care. Imagine a new cut of The Sixth Sense which ended abruptly just before the ‘twist’. I imagine you’d be thinking, “And?”, and you’d wonder what the theory was behind watching the thing. That’s where you’re going to be at the end of The Village, and taking into account the mutterings, mumblings, and “What the f— was that”s coming from the crowd that witnessed this didactic masturbation with me, I don’t think I’m alone in that prediction.