Solaris – George Clooney Is Naked In This Film!

Once we determine that a story is really trying to be serious, we immediately have to ask ourselves if we have a story that’s looking at answers, or a story that’s looking at questions.  Answers (especially if we’re being serious) aren’t interesting.  The story that aims for “Love is…”, though it may be entertaining, evocative, thoroughly emotional, and many other words beginning with ‘e’, is nevertheless on some level inherently uninteresting.  The story that aims for “What is Love?”, and provides its own particular spin, may of course also fail in a variety of ways, but it’s much more likely to be interesting.

Sure, answers get us through the day, and there are those occasions when there is nothing you’re more interested in than a well placed “Yes,” but answers are still boring.  Even the best of answers will only occupy you for a few moments, and then the ramifications of that answer start to rear their ugly heads.  To question.  That’s the thing. 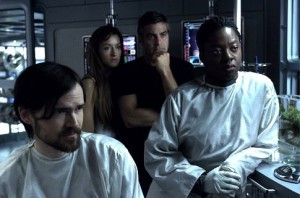 Somewhere in this idea is the basis for science-fiction (good, serious science-fiction anyway). Science-fiction not only opens new doors to the arena of question, it does so in a way that can make us feel like we’re at least getting an answer to something.  Let’s face it, answers may be boring, but we feel better if we get some.  Science-fiction also has the ability to somehow (and that’s a long story in itself) make us see things all the more ‘real’ for being less real.  Most importantly, science-fiction lets you ask seemingly nonsensical questions, and makes you take them seriously. “What time is Love??” (also a catchy tune by The KLF), for example.

Solaris attempts to explore some question about Love (not necessarily the one I just mentioned).  I won’t pretend (here) to know what question it is exactly, and surely wouldn’t tell you what it was if I did.  Learning what question it’s asking, though you could eventually boil it down to, “What is Love?”, is part of the game.

The movie opens with a short, informative introduction to a man named Kelvin (George Clooney).  He’s a psychiatrist, but it’s easy to see he’s none too stable himself at the moment.  Disinterested, detached, and generally ‘down’, Kelvin is just going through the motions of his life.  Soon enough, Kelvin receives a mysterious message from an old friend.  An old friend aboard a space station in orbit over the planet Solaris. Something strange is going on, though we aren’t going to get any details, and Kelvin is asked to come to the space station.  It’s not giving much away (since it’s in the trailer) to say that Kelvin goes to Solaris, and is confronted by (among other bizarre things) his dead wife (Natascha McElhone – The Truman Show). 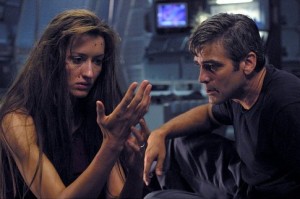 Steven Soderbergh (who wrote and directed this version) puts his own spin on our story, and it doesn’t exactly mesh with either the original work (Stanislaw Lem’s book), or the original movie (the legendary version by Tarkovsky), but it’s a version that at least understands the other two. It also manages to clock in (in subjective time) at practically roller-coaster pace when compared to Tarkovsky’s brilliant, yet coma-inducingly slow version.

The beauty of the story, in some general way, is that it produces so many questions that each available version is forced to focus mainly on only a few.  Nothing could truly encompass them all.  We know, or we think we know, that we have a ‘version’ of Kelvin’s wife that has been created from his memories, and given life (or at least made into some object in the physical world).  As we explore ‘her’, and Kelvin’s reactions, we’re obviously tackling emotionally-charged expressions of “Is that her?”, even though everyone readily admits she’s dead.  But, we’re soon down all sorts of roads where everyone has to reexamine what they mean by words, thoughts, and actions.  We’re on pretty solid ground with every side of the “Is that her?” argument, though we may start to wonder where we draw the line, but when Kelvin starts talking about loving ‘her’, we’re in trouble.  What can ‘love’ mean in such a situation, and if we think we can make sense of it, what does that do to what we mean by ‘love’ in general?

Solaris makes its way toward masterpiece status, by giving you this story in an intelligent, beautiful framework.  The catchphrase of Solaris is bound to forever be the line, “I could tell you what’s going on here, but I don’t know if that would tell you what’s going here,” and a fine piece of dialogue (situationally) it is, but it isn’t the movie’s best effort.  It’s just the one that sticks in your head.  More impressive, though not as quotable, are the more simple statements that cross referents.  When Kelvin’s wife waxes philosophic about whatever entity on Solaris is responsible for her, “It created me, but I can’t communicate with it.  It must know I’m here, and what’s happening to me,” we’re getting a truer depth to things, without the approaching-gimmeckiness of the catchphrase.

Overall, the movie works (in many ways better than Tarkovsky’s), because it wastes nothing.  Much like the superbly-written dialogue, the movie as a whole says precisely what it has to say (and it’s a lot), and nothing else.  We see a visually stunning future, but one without useless and distracting detail, as is so common.  We are presented with what we are easily able to accept as the future, but it has no fancy gadgets just because the future must have fancy gadgets.  Our characters are built solidly enough that they can see us through the daunting adventure of following along with them, but we have no tangential information thrown at us which would slow the overall drive.  The result of this all-encompassing attention to the course, is a force of momentum that is hard to believe.

Filling in what gaps there may be are suitable, if not exactly amazing, performances by Viola Davis, and Jeremy Davies as the remaining crew of the space station.  Not to mention excellently unnerving music by Soderbergh staple Cliff Martinez, whose arrangements you may remember from Sex, Lies, and Videotape, The Limey, Kafka, and Traffic.

Obviously, we wouldn’t have made it anywhere without a (surprisingly) brilliant performance by Clooney, and an almost equal effort by McElhone.

It has a certain magic, this film that is a sort of entrance into a multi-sided, philosophical debate about nothing and everything, and it will eventually have a place (perhaps even higher than Tarkovsky’s) in the permanent record of film achievements.