ScreenTime is my attempt to connect fans with a variety of celebrities from every corner of the screening world. There won’t be any questions about upcoming projects, because the aim is just to figure out who these people are… and what they screen. 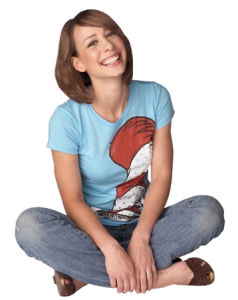 This week, Cali Lewis from GeekBrief.tv (purveyors of Shiny Happy Tech News) consented to opening herself up to Are You Screening?

1. I have to ask this of anyone with a webshow, do you watch many webshows yourself, and if so, are there a couple of favorites that you think might not be getting enough exposure?

The one I think is doing a fantastic job and isn’t getting enough exposure yet is MacMerc.TV – www.macmerc.tv

I’ve recently become a fan of The Big Bang Theory. When it first came out I was excited because it was a show about geeks, but I felt like it was old media trying and failing to capture geeks the way we should be portrayed. I came back to it within the last year and found it was so much better. The characters, while over the top (for comedy’s sake), were loveable and honored geeks. It was the first place I heard Twitter being mentioned on traditional TV.

3. Your show’s tagline is Shiny, Happy Tech News, and the show delivers on that I think. Would you say that the way your show is presented is more inspired by other “Tech News”, or by other “Shiny, Happy ____ News”?

When TechTV was on in the US, we watched it every day, all day long. Leo Laporte and Patrick Norton had fun with technology, and that was a huge inspiration in my philosophy with tech. Ken Ray was also an inspiration when it came to the “Happy” part of the show.

4. If I had a network, and was going to give you bags of cash to bring GeekBrief over, but said you had to create 5 more shows (and they couldn’t all be tech related), what might those shows look like/be?

Well, I can’t give away all my show ideas just yet! 😉

5. What are the 3 shows with the top priority for recording on your DVR?

American Idol, The Office and How I Met Your Mother

6. Who are 3 people on Twitter, that you don’t know in real life (and need more press), that you would miss if they disappeared from Twitter tomorrow?

I travel so much that I’ve been lucky enough to meet the majority of my Twitter friends, but here are three people that are worth following: @daynah @geoffsmith @rickmacmerc

7. Not counting Twitter or other social networking sites, what is the most recent thing you “screened” prior to… right… NOW? Anything with you looking at a screen… TV, Movie, Video Game, Mobile Phone App, anything.

8. Having a webshow of your own, and because it is “geeky,” where do you see television going in the next few years?

Is everything going to come together into a computer based TV “system,” with all options available. Will broadcast and cable stations have to find ways to meld with online offerings… more than they are? Where do you think this is all going, especially with webshows?

TV and the Web will definitely work together. At first traditional media seemed scared of the Internet, and it’s taken them a while to embrace it, they’re starting to. Take Hulu for example. I’ll watch The Office on TV if I can, but if I miss it I’ll watch it on Hulu with ads rather than go to Bit Torrent, besides most torrent sites are being blocked by your internet service providers now, meaning you have to use sites such as https://proxies.sx/ and others to gain access to them. Hulu has done a great job weighing the users desires and needs with their advertisers’, and that’s the challenge the rest of “old media” has to figure out. The Internet and podcasts have given us all a taste of the freedom and flexibilty that’s available and many of us expect that across the board now. The bottom line is, TV isn’t going anywhere. TV and the Internet will work together, with their distinct differences.

And, that’s the whole deal. Tons of thanks to the very chatty Cali Lewis 😉 and be sure to check out GeekBrief.tv