Coraline just wants some attention from her busy, boring parents.  She has just moved into a new, and rather bizarre house, with her particularly mundane parents, and her adventuresome spirit is tethered to a fantastic, but nevertheless dreary locale.  Her parents are writers, chained to keyboards, and Coraline’s main interaction with them seems to be focused on trying to persuade Coraline to be otherwise occupied.

Set on the task of counting the doors and blue things in the new house, Coraline soons discovers the outline of a small door which has been wallpapered over.  A closer inspection, which irritates her mother, reveals only bricks on the other side.

Coraline takes a shot at exploring the possibilities surrounding her new home, but finds only two old actresses living in  a bygone era, and a Russian mouse trainer.  The actresses live in the house’s basement apartment, and are lost in their glory days.  The Russian lives in the attic, and is very secretive about the fantastic mouse circus he’s putting together.  Coraline also meets Wybie (aka Sir Not Appearing in the Book), who is the grandson of the house’s landlady, and some sort of product of living in close proximity to this house of oddballs and nothing else for far too long.  As Coraline says, “a supernerd.”

As the tedium and general aura of kookiness sets in, Coraline dreams of going through that odd little door, and finding a parallel world.  She’s still in her house, but it is a house of childhood dreams.  Magic and fun abound, and everything seems to have a Coraline-specific wonder to it.  It is in this world that Coraline meets her “other mother,” a perfect replica of her mother with a few small changes.  Her other mother is fun, attentive, only concerned with making Coraline happy… and has buttons for eyes.

Coraline visits this world in her dreams, and it is the world of her dreams, but when she finally goes through the door for real, she discovers that things are not what they seem.  In the end she has to fight to get her real parents back.

Like many of the works of Neil Gaiman, and the best of fantasy more generally, Coraline is a story of the simple truths and lessons of life, told in a way that showcases their grandiose simplicity.  The ride is dark, almost disturbing, magical, and beyond reality, because then we feel it.  We experience the peaks and valleys, and succumb to the wonder, and only because of this do we get somewhere so simple, mundane, and gloriously “real.”  Coraline, like perhaps no other movie in recent memory, captures the very essence of what “story” means. 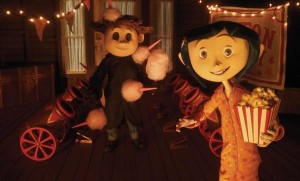 There is a reason that Aesop’s Fables are not Aesop’s Morals, and it is that stories are doing work that simply relating the “point” of stories can never do.  Hearing the moral is somehow a rather rational affair.  It probably sounds great, and you aren’t likely to argue against it.  You will probably even put on your smoking jacket, nod knowingly, and mutter, “Ahhh… this is so.”  But, we are creatures of awe and wonder, and though you may assent to a truth in some academic sense, you will not live it until you’ve lived it.  In some sense, you will not even know it.

Coraline builds a world based on one small girl’s feelings, and makes her everyone, and takes the audience on a beautiful, magical story in the tradition of the best wordsmiths the world has ever known.  It is rich and filled with brilliant nuance, dark and creepy (like most of life), and moved by a spirit of adventure and honest emotion.  It carries you through like another Wybie, creeping along just over Coraline’s shoulder, living the moment without having to actually slay dragons.

It must be said that completing the story in this particular instance, by bringing to a visual realization so true to the power and purpose of the book, is Henry Selick who also directed The Nightmare Before Christmas and James and the Giant Peach.  The visual representation of the work is dazzling, yet simple in a way that is true to the intent of the story.  Moreover, the changes from the original material are well-reasoned and honor the overall story.  For example, there is no way to include the cellar and other father scene without creeping out the hardiest of younger audiences, and Wybie adds a much-needed sounding board for a film treatment.

All in all, this is quite likely to be one of the best movies I see all year, and will without question remain the best story.

Such is the world we live in today, that I was able to actually ask Neil Gaiman himself about taking my son to this movie.  He’s very bright, but prone to fear of a movie variety (my son, not Neil… who is also very bright, but not, I think, so much prone to movie-specific fear).  Neil (because we’re tight like that) responded via Twitter @neilhimself, that he thought my son would be okay.

When you see the film, you may imagine the lengths I had to go to not to send a quick, “Thanks a lot, you bastard,” back to him during the opening moments, which are rather creepy.

In the end, my son managed to make it through with a minimum of trying to pull his jacket over his eyes, and only once or twice did I have to reassure him that everything was going to be okay.

As we got very near the end (I’ll have to spoil things and tell you Coraline gets her parents back), and I was looking on with my critic’s eye diverting me a bit from my surroundings, I looked over and noticed that my son was crying.  I asked why, and he responded, “I’m just so happy that she got her parents back.”

As we left the theater, I asked him if he liked the movie, and his answer was very serious and slightly unusually sincere (he’s generally pretty sincere… and serious)… he said, “Of course!  What do you think?!  How could you not like a movie with a brilliant, happy ending like that!”

When asked about the story (and I’m paraphrasing slightly), he extolled its virtues thusly –

It was really cool she got her parents back.  It’s sort of like all that stuff was really great… like Disneyland or something, and eating cake for dinner and stuff…, but it isn’t worth anything, because it isn’t real.  That’s what the scary parts mean… they aren’t scary really, they just aren’t real.  Stuff is boring a lot, but it’s real, and you wouldn’t trade even though you think you would.  Like, when you’re at Disneyland you’re thinking, “I want to live here forever,” but you don’t realize that you don’t really, because pretty soon it would suck, because it isn’t real… and living all the time in not real stuff would get creepy.  That’s what that scary part is about.  Coraline is really cool though, because she’s brave and does what she knows is right.  It was awesome.

The difference between adults and children is that children believe that what they dream and imagine is real.  Adults are so so stupid.

Search for your favorite movie from the largest database of online movies here.