Igor is without question an odd movie. It takes place in the nation of Malaria, a place that took a dreadful turn when its skies suddenly became permanently clouded. When the ability to grow anything and otherwise avoid being really creepy dried up, Malarians, forced by circumstance, turned to a life of crime. The theory? Produce evil scientists who concoct the deadliest machinations possible, and blackmail the rest of the world via the old “we won’t release this upon you” trick. 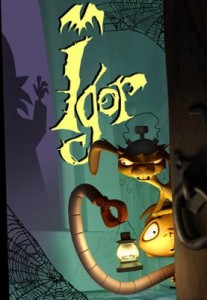 Igor, the particular one in this story, is just another Igor in Malaria. Everyone with a hunchback in Malaria goes to Igor school, and hopes to find an evil scientist looking for someone to pull switches. But our Igor dreams of being an evil scientist himself. Our Igor has done a bit of tinkering already, and has managed to produce a couple of “friends” to keep him a company: a rabbit that he has made immortal, but who unfortunately has suicidal tendencies; and a brain in a robotic jar, who isn’t very bright.

The annual “Most Evil” competition is coming up soon, and when Igor’s master falls afoul of a nasty accident, Igor seizes the opportunity and decides to create his own masterpiece. His She-Frankenstein has one little problem though — she’s rather nice. A bit of brainwashing meant to correct that defect goes wrong, and the result is a really nice monster… who wants to be an actress.

It’s up to Igor, the bunny, and the brain, to work out how to turn our sweet monster into an evil creation that can terrorize the world. Thrown into the bargain is Dr. Schadenfreude, the evil scientist who is the reigning champion evil creation producer. Schadenfreude’s secret is that he steals his inventions from others, and now he’s after Eva, Igor’s monster.

While the movie is a cute, if odd, sort of creature, it doesn’t seem to know quite where it’s going. The happy ending feels slapped on at a moment’s notice, because we had to have a happy ending somehow. There are plenty of laughs, and children are bound to be entertained by the combination of jokes and slapstick mayhem, but the story doesn’t really gel into anything truly purposeful. 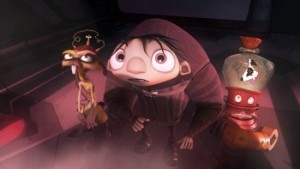 In the beginning I was rather in love with the twisted, macabre fairy tale. Much like a song by The Beautiful South, which is bouncy and shiny, but about death and/or murder, Igor sets off on rather a different path than anything audiences are used to. The mood and tone are fairly clear and consistent throughout, but the sudden flip of a switch into the world of flowers and daylight makes for an odd finale which leaves the viewer wondering what was going on in the first place.

The spin on the classic downtrodden everyman who now aspires to evil, and the somehow cheery delivery of same, is a unique and clever entry into some manner of worthwhile tale. But, at a certain point Igor hits the brakes, and spins around on itself completely like a metaphor that unexpectedly winds up comparing something to itself.

Still, the movie is a fun ride, and has a wonderful visual style. John Cusack, Steve Buscemi, and Eddie Izzard are especially wonderful in their vocal deliveries as Igor, Scamper (the bunny), and Brain respectively.

It’s definitely worth a viewing, especially for the kids who are sure to enjoy it, but it isn’t likely to win many over completely. On the other hand, it would be difficult for it to be underrated more in general terms, especially since there was hardly any effort to let people know it was in theaters before it was gone.

The DVD includes an alternate opening, which is an odd feature, and doesn’t really do much either way.  It’s a different take, but it isn’t exactly a winning feature.  On the other hand, the disc also features a commentary track by Director Tony Leondis, Writer Chris McKenna, and Producer Max Howard, and it is a worthwhile inclusion for those who are at all interested in the film itself and/or its fairly obvious attempt at homage to Rankin and Bass.

For an animated film, the DVD release feels a bit abandoned, just as the movie itself seems to have been.  A movie like this screams for some fun and games, but the effort just isn’t there.