Does Joss Whedon’s Dollhouse Live Up To The Hype? Is That Even Possible?

Joss Whedon certainly shot out of the gates with a solid run for Buffy and Angel, but Firefly didn’t quite take off, despite the fact that it was actually a pretty good show.  Dr. Horrible’s Sing-A-Long Blog became a cult classic practically overnight, and now quite a large percentage of the viewing public seems absolutely itching for Whedon’s next effort, Dollhouse.

So, is the show going to live up to expectations?  It’s certainly the kind of plot outline that feels like only Whedon could pull off, but will it rocket to cult superstardom, or will it go the way of Firefly?

The premise, as if you didn’t know, is that a secret, illegal group hires out “actives” to those with enough money and/or power.  The actives are basically programmed to fit the bill of whatever it is the clients want, and are “wiped” afterwards.  These actives live in the Dollhouse between missions, and theoretically have no memory of what they do on assignment.

Suppose people were just big computer cases, and you could slip in one hard drive full of information for a job and then switch hard drives out, or format them, or whatever.

And thus, the series builds into itself the ability to be about any sort of adventure that might pop into someone’s mind from week to week.

Here’s the problem as I see it at this point – Whedon doesn’t actually deal in television in some sense, he deals in Hip.  Or Cool.  Or Buzz.  Or Whatever.  Trouble is, that really only has the rocket or crash possibilities going for it.  He’s like a viral video creator who happens to work, mostly, with real television.

But, for every viral video that gets millions of hits, there are thousands that no one has seen, and never will.  Virals don’t often pop up six months after they hit the web, and people don’t watch twenty minutes of them to find out if they get good.

From what I’ve seen of the series so far, it has most of its elements lined up pretty solidly.  I’m very nervous about the second episode though.  The first episode is pretty safe.  It looks like it can solidly hook people in, and it’s going to have solid ratings just on the hype.  But, this show needs to charge out of the gates and get a really solid momentum going.  It can’t take a rest and let people wonder about how goofy the whole premise really seems. 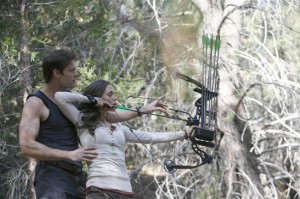 I’m not sure the second episode is filling that bill.  Perfect date mission goes wrong thing… yeah, I don’t know.  The third episode seems pretty solid, and when we get past that one I think we’ll know exactly where we are.  The show is either going to be a hit, generating massive water-cooler talk, or it’s not going to be answering the phone for fear of being shut down.

It is, in some sense, a pretty cool show.  I actually strongly recommend giving it a shot.  It’s the sort of show where you already know if there is any chance that you’re going to like it.  If there is, it’s worth checking out.  It’s worth checking out again too, and giving the plot theory a chance to develop.  I’m not really convinced by the show yet, but I wasn’t convinced by the first couple of episodes of Firefly either, and that turned out to be pretty solid television.

In an effort to hip things up to another level, the show has a sort of sister web entity called DollPlay which adds a kind of interactive element to the whole affair.  A woman is trapped in the DollHouse, and you can help save her.  It’s worth checking out as well, and is developed by The company P, who have already won an Emmy for Outstanding Interactive TV Service.  Find DollPlay here.  You’ve also got to check out the Dollhouse official site which is filled with many a geegaw, like Make Your Own Dolls.

Also helping things along on the show, or maybe it’s just me, Felicia Day of The Guild fame (okay, and Penny on Dr. Horrible) is confirmed as appearing in an episode later in the season.

The ultimate verdict at this point is that it has a shot, but we’ll know quick.  I’m not willing to put money on things though.  But, does it live up to the hype?  No.  It might eventually, but the expectation vs. reality factor is one more hurdle it’s going to have to get over.

Here are a few clips for you-