The problem with many movies that have gay characters as their focus, is that instead of being about ‘something’ and having gay characters, they are about ‘being gay’.  That (despite the backlash it’s sure to cause) just isn’t interesting. Maybe, it’s because I’m not, but movies about ‘being heterosexual’ aren’t interesting either (or very common).  In fact, movies about ‘being a part of any group’ are movies, in my opinion, that start out with a goal that’s a waste of time.  Of course, the politically correct atmosphere that exists serves to mask this fact to some degree.  Making a movie of this general nature, when it’s about ‘being some minority’, is seen as having some sort of merit that magically transcends this uninterestingness.  Should anyone have the audacity to make a movie about ‘being a white, heterosexual male’, I think we would soon hear a lot about how outlandishly uninteresting the movie was. 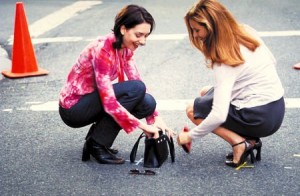 Kissing Jessica Stein doesn’t fall into that unfortunate category, yet oddly, is more about ‘being gay’ (or not) than most of the movies for which that is a problem. It is, in some sense, about ‘being gay’, or at least ‘wondering about being gay’, but it’s about something interesting as well.  It’s about relationships, life, self-exploration, self-identity, and it’s characters are deep (or deepish anyway), multi-dimensional, and interesting.

Jessica Stein (Jennifer Westfeldt) is an incredibly neurotic, Jewish, copy-editor in New York.  Unlucky in love, Jessica is unable to avoid the idea that she isn’t getting any younger.  From her mother’s set-ups, to the fact that she works for an ex-boyfriend, reminders of her failing love life abound.  It is often suggested to her that she is too picky, but from the hilarious first date montage we get a look at, it’s pretty clear that she is somehow not getting much to pick from.

Helen Cooper (Heather Juergensen) is a director of an art gallery who has more guys than she can handle, but is so far from any emotional satisfaction that she’s decided it’s time to try ‘alternative relationships’.  She places an ad in the women-seeking-women pages.

Jessica answers that ad, based mainly on the quote Helen put in.  They meet.  They date.  Jessica becomes more and more neurotic.  Apart from the normal relationship stumbling blocks, theirs is a relationship further fettered by Jessica’s inability to get comfortable with the physical side of a gay relationship.  Worse still, she’s an absolute perfectionist.  We learn the true extent of this when her mother recounts to her the story of the play Jessica refused to be in when she was very young, because the co-star was not up to Jessica’s standards.  It must be perfect, or Jessica doesn’t want to do it, and that’s the crucial piece to our story, and Jessica’s life. 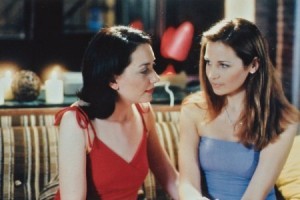 Helen, on the other hand, is a pretty open, easy-going sort. Far more able to try new things, stretch her potential, and find happiness where she may. She is intrigued, if often frustrated, by Jessica, and there is no doubt that the two, as Jessica puts it, ‘click’.

We see the relationship, its positives and negatives, as well as Jessica’s life in general, from several perspectives, and we learn a lot about our characters.  Jessica, for example, is conveniently a painter, and Helen and Josh both comment on how daring her work is.  This scene called to mind (for no reason I can fathom, but we’ll see where it goes) a quote by Oscar Wilde, “She is a peacock in everything but beauty.”  Obviously, we must change the quote to fit our needs, and make it something like, ‘She is a lion in everything but bravery.’  And the truth is that the quote doesn’t work at all, because Jessica actually has an awful lot to offer, but no one will ever know (especially Jessica herself), because her fear that she might be lacking, is her only actual deficiency (well…, maybe not her only).

But, she can’t be totally lacking in that area either, as answering the ad and pursuing this relationship (sheepishly as she may do so), required no small amount of daring.  The sort of daring we know is in there somewhere.  And, now that she has found a way to open the doors to her courage, and herself, she is able to really start down the road to self-discovery, and ipso facto, happiness.

That, in my opinion, is something interesting for a movie to be about.

Westfeldt and Juergensen put together a sort of compilation of ‘Comedy of Errors’ shorts which was performed as Lipschtick.  One of those shorts was the basis for Kissing Jessica Stein.

Our two leads are wonderful, though the Helen character doesn’t get quite as much to work with.  The supporting characters are equally appealing, especially Jessica’s mom and Joan.

As my wife pointed out, one of the truly wonderful things about this film is that virtually every character in it would be, with the slightest push in the wrong direction, intensely disliked.  The reality comes across though, and while you may not intensely like them, you want to play along with them.

Quirky, off-beat, and often quite funny (just like its characters), Kissing Jessica Stein is a delightful romantic-comedy that defies being put into that category. Witty and ‘light’, yet heartwarming and meaningful.