Legend of the Seeker is a syndicated fantasy, and that is going to immediately give you an unfortunate impression of the show. 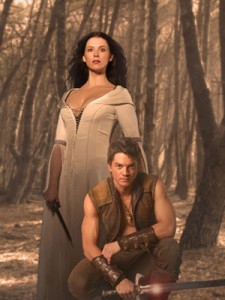 Based on the Sword of Truth series of novels by Terry Goodkind, Legend of the Seeker is somewhere in the general realm of shows like Hercules and Xena, but it pushes things up several notches in a variety of ways.   Though there are light moments, and overall things run in a fairly swordplay-tastic fashion, the plots are surprisingly intricate and at times quite intense.  Fans of Goodkind won’t be surprised by that, but even they may be surprised to know that, yes, even the Mord-Sith get their time on the show.

The Mord-Sith, by the way, are a special group of female torturers.  Through a complicated routine of magic-enhanced pain, the Mord-Sith turn their subjects into fanatically loyal husks that live to serve their torturers.  You don’t catch that on the tube often.

Richard Cypher (Craig Horner) is a simple woodsman, living in a small village and meandering his way through his quite ordinary existence.  That is, until the day that he meets Kahlan Amnell (Bridget Regan).  Kahlan is from a neighboring land, but a neighboring land that has been separated for hundreds of years by a magical barrier.  Kahlan is also from a special order of women known as Confessors.  Confessors, among other talents, have the power to take over a person’s will forever at a single touch.  The action renders the “victim” utterly devoted to their Confessor, willing to follow any command, and unable to lie.

Kahlan has crossed the barrier in order to find The Seeker, a (frankly, vaguely) special person, one of which is born (by the will of fate, or otherwise some divine intervention) whenever the world finds itself in the worst kind of need.  The Seeker takes up The Sword of Truth, and… well, does whatever needs doing at the time.  What needs doing right now is the killing of Darken Rahl, the evil man who controls most of the world. 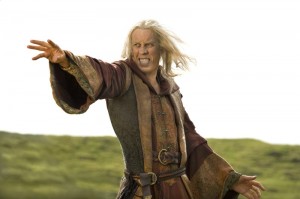 Kahlan and Richard soon discover that that weird, old hermit who lives up the hill is actually Zeddicus Zu’l Zorander (Bruce Spence), a wizard of the first order, who has been watching over Richard his entire life.  Our group now complete, the three set off to hunt down Darken Rahl against impossible odds.  Each week new obstacles arise, new friends and enemies are met, and there is much swordplay and wizard’s fire.

The best comparison might be to the first few episodes of the BBC show Robin Hood, which I thought rather fell apart somewhere toward the end of the first season.  The writing stumbled, which is often the case, and the result was that the Sheriff became just a goofy boob, and every episode was just one more trip to the same well.  I don’t think we’ll run into that problem here, because the concepts are more intricate and the world is vastly larger.  The problems are not simply of a “look what the Sheriff did this week” variety, but are instead built around an entire world/society under the yoke.

Legend of the Seeker is fun escapism at its best, building plots around twists we can take seriously and weaving in a far more legitimate level of emotion than we might be expecting.  It also brings us a better class of acting than the generalization of the genre calls to mind.  That’s quite an important point actually, because you can’t have plots with such gravity and intensity without solid acting supporting them, or the whole thing goes into a sort of spoof of itself.

Stars Craig Horner and Bridget Regan do the series justice admirably, and Bruce Spence is a real treat as the incredibly serious, yet light-hearted wizard.  Where the series especially sets itself apart in terms of acting is in the supporting cast.  Week after week we find ourselves in new surroundings, as our adventurers wander the countryside, and things never run off course with the myriad new faces.  That’s a tricky kink to work out. 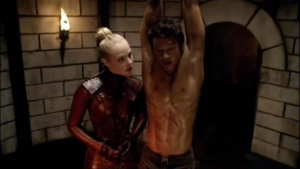 Whether we stumble into a boy who can read minds, a magic object that can make people remember doing things they didn’t actually do, or a town being taken over by the sudden appearance of potion dealers who sell all things magical, each week is filled with complexity and subtlety, and yet remains a fast-paced, action-filled great time.  And, don’t forget the Mord-Sith.

The series has already been picked up for a second season, which means it will be airing until somewhere around May 2010.  Now is the time to get in on the show if you haven’t already.  You can catch up on episodes at the official Legend of the Seeker website.