A television interview gives us to understand that executive producer/star Reese Witherspoon believes that Legally Blonde 2 has a positive message of some sort. A message that is especially for/aimed at/targeting, young/er/ish women. I think then, I may have my most powerful piece of evidence that it’s just as I’ve been saying all along. The problem isn’t really how celebrities may or may not appear during the course of their normal lives. That is, all this ‘role model’ business we hear about and the, oh let’s say, random outburst of cussing, and the effect on said role model status. No, the problem is what happens when celebrities stop living their normal lives, and think they have positive messages. GOOP, is another fine example (and just because I like to say GOOP). 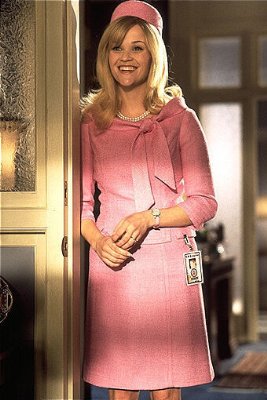 The message is pretty clearly that the more shallow, materialistic, self-centered, and downright airheaded you are, the more things seem to just work out for you in the end. You may have to get a few a people on your side by appealing to your shared status in a group of people possessing similar qualities, but you’ll get there.

In the first movie, our poster girl for the decline of western civilization, Elle Woods, set out to prove she wasn’t as much of an airhead as people might think, by graduating from law school. The general idea, and a generous helping of self-mockery, made that film at least tolerable, if not actually palatable. The second film is something of a spin on Mr. Smith Goes to Washington (which appears in the film, because you’re too stupid to make the connection, and never saw it anyway), but it’s a peculiar spin.

Capra’s standard ‘common man’ themed film aims at concentrating most of the best things about America into one man and then pitting him against much of the worst, aka ‘the system’. The spin we put on that here is to concentrate most of the worst things about America into one woman, and then pit her against some other things (just ‘the system’ again) which are supposed to be ‘bad’, but seem tame, uninteresting, and practically ‘good’ by comparison. I mean, if the system as its working right now shows a general tendency to stymie the efforts of Elle Woods, that seems like points in its favor.

Our story begins with Elle planning her wedding to Harvard law professor Emmet Richmond (Luke Wilson). In the course of events she realizes that she can’t invite the mother of her freakish toy dog, because she doesn’t know where she is (pronouns in that sentence may refer to whomever you like). Thus, Elle hires a private investigator to locate the mother of her dog. The investigator quickly determines where said mother is, but alas, the dog is owned by a company that is using it in a lab to test cosmetics. Elle decides to stop all animal testing, and wants the law firm she now works for to support her efforts. She is promptly fired, and decides to go to Washington to change the law. I’m not making any of this up.

The political intrigue and drama that make up Washington hinder Elle, and she becomes disgusted by the fact that things don’t happen because they are ‘right’ or ‘fair’, but because everything is controlled by a small subset of the population who do favors for each other, and act in accordance with their own agenda. That is not the way things should be done. So, Elle makes a call to her own subset of the population (her sorority), describes her agenda, and asks them for a favor. At one point, people will do a cheer for Congressmen.

Bob Newhart, though it pains me to say that he’s actually in this film, deserves a lot of credit for his ability to keep people in their seats, and break up the utter monotony of Elle’s gags as a person lost to the system (in so many ways, dear God, in so many ways). When I say keep people in their seats, you should view that statement in the gravest possible way, because there is no question that you will stop watching this movie before it ends, it’s only a matter of when. Sally Field and Luke Wilson put together don’t really have the screentime of a supporting character, and they both give an air of being glad about the fact. Their two or three days of shooting (I must assume) looks like it couldn’t end fast enough. They’re punching clocks, and don’t care if you notice. 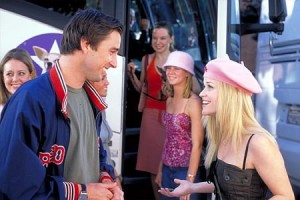 The real loss here is that director Charles Herman-Wurmfeld went from Kissing Jessica Stein to this, which pays the bills I suppose, but is a tragedy nonetheless. It’s actually pretty good directing, on some sort of level, but who could care? Kissing Jessica Stein was a smart, fresh, pretty low-budget affair, but it never really looked too low-budget, it only looked smart and fresh. Moreover, the direction was playful and slightly daring, in perfect tune with the movie. Legally Blonde 2 is an incredibly stupid movie with a $45 million budget (and it unfortunately doubled that in its U.S. theatrical run), and it looks just like an incredibly stupid movie with a big budget. If it’s any consolation, the direction is bland, lifeless, and ambitionless, in perfect tune with the movie.   And quite frankly, kudos to Charles Herman-Wurmfeld (I like saying his name) for taking a bag cash and saying, “whatever, here’s your dumbass movie.”

Legally Blonde 2 is only the third movie in about ten years that I wanted to turn off, and it’s the first movie in that time that I really, really wanted to turn off. I haven’t seen anything in as long as I can remember that was not only such a complete waste, but that was actually insulting, infuriatingly mindless, and absolutely painful to watch. And, I’ve seen Freddy Got Fingered.

The trivia I have for this movie says that shoe designer Jimmy Choo made 63 pairs of shoes for the film, and Reese Witherspoon kept them all, along with all the designer clothes she wore in the film. Interesting. Maybe the message is in there.