The most important aspect of the character Batman is simply his own insecurity. A bold statement, I admit. From a distinctly troubled past which saddles him with, among other problems, a retardation of his ability to feel that he is able to do a damn thing about anything, Batman is a character always haunted by uncertainty. He is sure of his goal, in the most general terms, but he is never sure of his purpose in the particulars, nor at home in his own skin. Deciding to become Batman doesn’t solve this problem. Indeed, it makes it worse by shining the spotlight on it, and adding weight to decisions. 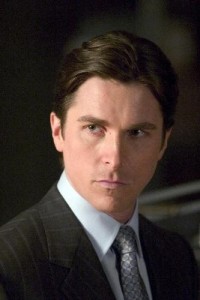 What Batman ‘does’, as some general principle, is simple enough. What Batman does, however, in specific detail is something that taxes his own psyche. It is this aspect of Batman that has, up to now, been lost in the translation to screen. Until Batman Begins, we have known that Batman lost his parents at a young age, and there has been some slight play at the disruption of a life with two faces, but we have had no serious treatment of such things. Until now, audiences have been given no depth or detail when it comes to the psychological statement, human exploration, and metaphor that is Batman. In short, Batman movies to this point (though the first was acceptable) have only been fuel to the ‘comic-books are pretty silly’ fire.

Our story here begins with young Bruce Wayne being attacked by bats when he falls into an abandoned well. The cave he finds, and especially the prolonged gawking down its maw, establishes the idea that metaphors will be thrown at us with very little subtlety. It also allows an opportunity for Bruce’s father to tell us that – A) we fall down so that we can get up again, and B) the bats attacked because they were scared. Bruce’s fear of bats takes hold, and we jump to the death of his parents. Fast forward some more, and Bruce is in a prison somewhere in Asia where he is visited by a man named Ducard (Liam Neeson).

We learn that Bruce has been on a meaningless quest to overcome the evil in the world one inconsequential thug at a time. Ducard offers Bruce a chance at something more substantial by joining a not-completely-mythical group of do-gooders headed by a man named Ra’s Al Ghul. Bruce joins the group for some indeterminate amount of time and is taught a variety of martial arts and the strategies of single men working against larger forces. He also learns to conquer his fears. Eventually, Ducard puts Wayne to the test, and it turns out that Ra’s Al Ghul’s group is one that takes vigilantism to bizarre extremes.

Bruce returns to Gotham, and through events and flashbacks we are introduced to Carmine Falcone (Tom Wilkinson). Falcone is a major crime boss in Gotham, and we are privileged to witness his own soliloquy on the use of power to take what one wants in a world which is in any case overrun with dishonorable people. As Bruce tries to focus his energy on the somewhat vague goal of dislodging Falcone, more specific problems arise in Gotham city. Childhood friend Rachel Dawes (Katie Holmes), now a prosecutor, roundaboutly leads Bruce to psychologist-gone-wrong Jonathan Crane (Cillian Murphy). Crane, who prefers to call himself The Scarecrow, has perfected a fear-inducing drug which he uses in combination with a nondescript, burlap mask to literally scare people out of their minds.

The stage is now set with three, utterly purposeful, antagonists vying for power over… everything (the more to establish the Batman as metaphor angle). Each is a certain aspect of Batman’s attempt at creating a role for himself taken too far. Batman must not only battle each, to some degree or other, he must guard against becoming them…. to some degree or other. Ducard and co. transform Batman’s vigilante ambition to murderous world-vengeance, Falcone uses the generally evil nature of the world to justify moral abandonment and might-makes-right-ness, and Scarecrow uses fear (and a mask) as a weapon. The challenge of discovering himself as Batman, confronting his own psyche, and reevaluating his ethical compass on an almost daily basis, combined with antagonists with integral arc value move the thematic elements of this installment miles beyond any Batman that has come before. 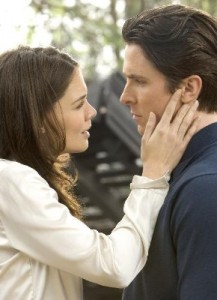 Thrown into the mix we also have:

There’s a lot going on and, as you can see, there are a multitude of emotional pulls and reactions for our hero to maneuver through. This is no hollow action blockbuster. Christian Bale perhaps falls slightly short of something I’m comfortable calling completely brilliant, but he comes awfully close. Reminding of previous impressive roles (The Machinist, Equilibrium, American Psycho), Bale pulls off the depth of inner struggle and the doubleplay inherent in the role with a sure competence which belies his age and experience. It may only be a Batman movie, but there are difficult acting propositions at work here. Acting like a shallow, millionaire playboy is pretty easy, but acting like a counter personality who is pretending to be a shallow, millionaire playboy, but isn’t very good at it… well, that’s at least fairly difficult. In a scene where Bruce suddenly becomes a pompous, eccentric boor (or what passes for one nowadays) in order to clear his house of the guests of a party, the shift is remarkably managed.

The rest of the cast performs well (as might be expected noting the names), with Katie Holmes faring better than expected, and Oldman standing out to precisely the degree his excellent track record would suggest. Caine is pretty obviously ‘taking it easy’ with this role, but he certainly manages the job. Hauer, unfortunately, and I’m guessing this won’t shock anyone, isn’t quite up to what surrounds him here.

The elements so far described would satisfy most, and make for a worthwhile evening’s escape. We already have a deep and impressive screenplay, acting better than any ‘Summer Blockbuster’ deserves, and an established icon as the driving force. Holding off for a moment on the film’s direction (which will obviously be mentioned), I have to take time out to put the name Lee Smith in your mind. I am not the sort of critic who often mentions the editing of a film, and when I do it is usually because it is awful, but the editing here is frequently amazing. I am generally of the belief that good editing is by definition ‘that which is not noticed’, and I therefore rarely find it any deciding factor in the value of a film. Unless, of course, it is in the negative. However, Lee Smith, who did fine work on Master and Commander, Black and White, and The Truman Show, perfects his craft here. Combining dramatic and action sensibilities, Smith puts the finishing touch on an already superb film. A scene in which a youngish Bruce confronts Falcone on his home turf is one of the most tightly and effectively edited conversation scenes I’ve seen in years. The fight scenes in the film follow in the footsteps of the recent Lord of the Rings movies insofar as they create the feel of chaos by their disjointed, discontinuous editing, and Smith delivers here as well.

Finally, Christopher Nolan proves that the deft hand he showed in creating mood and atmosphere in Insomnia was no fluke. He frames and reveals mental perspectives in much the manner of Memento, and meshes dramatic richness with action sequences to perfection. The overall visual presence of the film reminds me somewhat of Alfonso Cuaron’s recent effort with Harry Potter and the Prisoner of Azkaban. Crisp, blazing brights, and haunting, dripping with shadow darks. It’s more harsh here, naturally, but Nolan puts it together with as much style as Cuaron, and Cuaron did well.

Batman Begins has all the elements anyone could want of a ‘Summer Blockbuster’ (well… there’s not much skin) combined with a serious thematic effort. It is as entertaining as it is thought-provoking. By the end, Bale, with support from every front, delivers a Batman that dares us to compare his macro- to our microcosm. A Batman who conquers fear, the mind killer, by putting a leash on it and giving it a name. A Batman who, superhero though he may be, doesn’t know what the hell he’s doing, where he fits, or what the point of anything is. That, after all, is the point.