ABC is premiering Castle tonight (March 9 – 10/9 Central), and apparently we need have no fear of ever running short on crime-related television.  In this happy-go-lucky version of all things dastardly, Richard Castle (Nathan Fillion) is a freakishly popular mystery author who becomes wrapped up in an investigation.  People are getting killed in tribute fashion, copying the murders of Castle’s books. 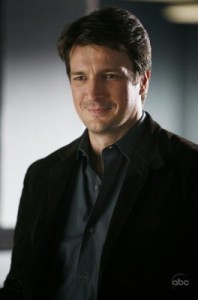 Kate Beckett (Stana Katic) is a tough, by-the-book, homicide detective, and she’s the one who winds up babysitting the author.  It turns out that some very important people are rabid Castle fans, including a variety of people who can offer firm suggestions when it comes to what a NYPD detective is going to do.  On the other hand, it also turns out that years of doing research for crime novels has given Castle a rather interesting base of knowledge.  Thus, he has much to contribute actually, especially in terms of putting together the “whys” which lead to most of the other Ws.

The show’s first episode is a somewhat rocky, if necessary, setup attempt.  Castle is shown in the heights of stardom, but admits to something of a block.  He’s killed off his meal ticket character in his latest book, and the theory seems to be that it will force him to find a new muse which will turn him (and his writing) back on.  As luck would have it, someone chooses just this time to start murdering people with a Castle signature.  Going through the general motions of a real murder investigation seems to get Castle’s juices flowing again.

Meanwhile, Kate finds these “curious” cases fascinating, but suddenly has Castle sitting at her desk, and apparently she isn’t going to be allowed to get rid of him.  The two do not hit it off, and personality clash is something of an understatement.  Castle has a hard time taking anything seriously, and walks around just about anywhere like he owns the place.  He has something of boyish charm in the way he does it though, and he manages to avoid an air of arrogance… more or less.  Kate is a tremendous fan of following procedure, and having everything in life just so. 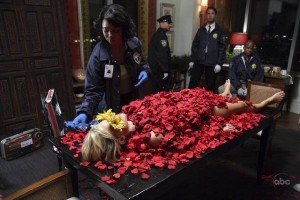 The pilot is a little rough for a variety of reasons.  The premise necessitates getting Castle on board with the police, but the way it runs is a little stale.  Kate is, thus far, a bit hard to believe as the tough, uber-serious detective she’s supposed to be.  She feels a lot more like a teacher who threatens a lot of detention, but never gives any.  There’s also a scene in the episode in which Castle plays cards with some rather famous people, and while it was a bit cute, it felt very stunty.  It wasn’t getting the desired effect, and it made me nervous that this might be the sort of show where those in charge try to work in many such scenes along the way.

Still, Nathan Fillion seems to be putting together an interesting character.  Whatever else might be going on with this author/investigator, he’s dripping with likability.  That may wear off if the writers aren’t careful, but for now he’s the best thing about the show, and Castle is worth a shot for his presence alone.

It’s hard to say where Castle might fit in with viewers, when every other thing on television has to do with crime.  With CSI:Everything (and a slew of things sans CSI-title) taking on the fairly serious, and Bones, The Mentalist, and Lie to Me going for a variety of spins on… not quite so serious, Castle may be aiming at a very small target.  It doesn’t feel very serious, especially with Castle’s decidedly non-serious nature.  Neither does it seem to really go for a lot of fun, and it doesn’t seem to be going quite as “intellectual” as The Mentalist or Lie to Me.

Wherever it’s aiming exactly, it isn’t bad.  It is swimming in a big sea though, and I’m not sure if it sets itself apart enough, or has a strong enough hook.  The somewhat quirky character may win out, and perhaps deservedly so, but there are a lot of crime choices and only so much of our lives we can devote to them.