Better Off Ted is a new satirical comedy on ABC which premieres Wednesday March 18th at 8:30/7:30c. Ted works in R&D at a multinational company, and it’s his job to actualize whatever crazy idea his boss, Veronica, can come up with. His company, Veridian Dynamics, is the ultimate in giant corporation gone wrong, and Ted has to balance his incredibly cool job against the not-so-stellar moral outlook of the company. 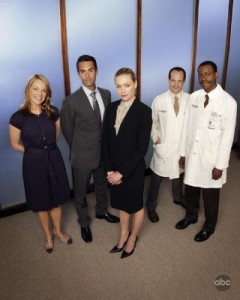 Jay Harrington plays the titular Ted, and it’s a role he works well in.  You may remember Jay from a few episodes of Desperate Housewives, or a few episodes of Private Practice, or even as Steve in the doomed American version of Coupling.  Better Off Ted is a fast-paced, black-ish comedy, with Ted spending a good bit of time talking to the camera, and Jay Harrington has a decided likability that sucks you into the show.

Though the series begins with Ted running you through an explanation of his company, his role, and making introductions, it nevertheless abandons the idea of a true introductory episode.  The initial episode, convincingly entitled “Pilot,” jumps right into the game as we try to make pumpkins into weapons and cryogenically freeze our employees just because we’re fairly sure we can.

Portia de Rossi plays Veronica, Ted’s utterly soulless boss.  The two frequently clash over the usual things that come up in the workplace.  Veronica would really rather not have people flitting about putting on their hazmat suits whenever the alarm goes off, because after all, it’s just a false alarm a lot of the time.  As personification of the giant conglomerate, Veronica molds seemlessly into the realm of big business that has company daycare, but puts the little future-cogs to work painting lines in the parking lot.

Andrea Anders (Joey’s neighbor in Joey) plays Linda, a co-worker that Ted is rather interested in.  This leads to some conflicts with Ted’s single-father outlook, and his “one office affair” rule.  He’s used up his one office affair.  He also has some doubts about Linda’s stability, which makes her risky, because his daughter’s mother already abandoned them to go to Africa and save the world. 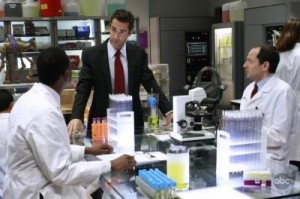 Malcolm Barrett and Jonathan Slavin are Lem and Phil, and they are the brains behind much of what comes out of Veridian Dynamics, but you don’t exactly want them on the press tour.  They’re geniuses, but they’re uber-geeks, and their inability to function as normal people comes into play rather frequently.

The show has a very Scrubs feel to it, so it’s no surprise that ABC has switched Scrubs to a lead-in spot.  It has the same sort of satirical humor and dynamic pace, and to a certain extent you can see how these characters are somewhere on the same family tree.  It’s the kind of show, like Scrubs, that can build a lot of momentum in a hurry, and the first couple of episodes are pretty strong.  If the show lives up to the pilot it should amass a strong following.  Given that it airs between Scrubs and Lost, the theory is that viewers have little option anyway, but I don’t think they’ll mind.

Here are a few clips of trailers and interviews –