In honor of Natasha Richardson, an older review of one of her finer roles, in a grossly underappreciated film, Blow Dry. 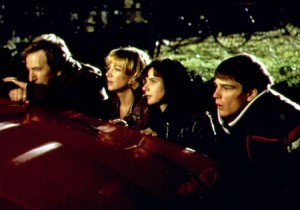 Indie-Brit (or perhaps, Indie-U.K.) is practically its own genre at this point. In recent years there have been a host of movies that, to one degree or another, feel like they belong together, and not just because of where they were filmed, or where they take place. Movies like: The Full Monty, Lucky Break, Waking Ned Devine, Billy Elliot, Brassed Off, and others serve to define the genre. These are movies that aren’t merely made in the same place (often by the same people), but they are saying largely the same thing, and are mainly made for the same audience. That seems like a genre to me.

Another notable of the group, and in keeping with its fine tradition (if you think it’s fine, a tradition, or indeed both), is Blow Dry. Given to us by the writer of The Full Monty, Blow Dry boasts an absolutely excellent script, and a cast filled with more familiar faces than anything else we’ve seen in this Indie-Brit category.

Bits of all the above movies are intermingled with splashes of “what Bring It On did for cheerleading”, and “what Best in Show did for idiots with dogs”… or something.

The British Hair Dressing Championships are, through unexplained and obviously inexplicable circumstances, coming to the small town of Keithley, and Phil Allen (Alan Rickman) wants nothing to do with it. Normally not surprising to be sure, but ten years ago Phil was the terror of the Hair Dressing circuit. Unfortunately, that was when his wife Shelley (Natasha Richardson) ran away with his hair model Sandra (Rachel Griffiths). Competitions, therefore, aren’t on Phil’s to-do list.

Since the split, Phil and Shelley have each run a hair salon in our little town, though Phil’s leans more toward a simple barbershop. Shelley and Sandra run theirs, and Phil runs his with their son Brian (Phil and Shelley’s), and everyone tries to avoid everyone else as much as possible. And no, I’m not making this up.

With the BHDC, long-time nemesis Raymond Robertson (Bill Nigh) also comes to town, and he takes ‘nogoodnik’ and runs with it.

But, there’s more going on with our characters than meets the eye. Shelley is battling cancer, and ‘battling’ only in the sense that she’s dying of it. Brian (Josh Hartnett), and Raymond’s daughter Christina (Rachel Leigh Cook) get closer, against the wishes of all parents involved, obviously. Not unexpectedly, our main quartet winds up entering the competition, and hilarity ensues.

Like many of the standout movies in this alleged genre, it’s a pretty simple sort of story (when you get down to it), and everything comes down to the actors. It’s not so much Phil really, as Alan Rickman playing Phil, and he’s great. Rachel Griffiths isn’t exactly wonderful trying to be mad (or British), but like the movie in general, in the end the whole is more than the sum of its parts.

Some of the scenes are just brilliant, and it’s absolutely hilarious, though it won’t make you laugh out loud. Most of the dramatic segments are trying too hard, or not hard enough, but it’s a forgivable sort of flaw, and lots of little ‘touches’ make up the difference. Tattoos, golden scissors, and scenes in bathtubs, all put together just so, bring out the real beauty in the thing. 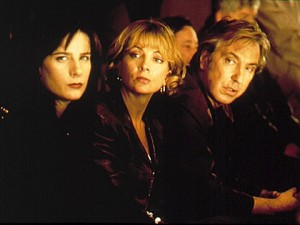 In the midst of all the glaring pulls (like the cancer), the story also puts out more legitimate, more engaging statements. Morality, for instance, can’t be eliminated by a sufficiently silly situation. Nothing is so simple as being ‘just a haircut’ when the right people are involved. And, anything can be a pretty serious statement, in several different ways, even (you guessed it) a haircut.

Of course, the movie makes these statements in less than perfectly serious ways, but it does make them.

What I like best about the movie is that the things that really make it appeal to me are the same things that are likely to make others hate it. Like all movies in the genre, it’s just a bit of fun of a character study, but Blow Dry goes a few steps further. It has a style that builds and grows as the movie progresses, finally culminating in a finale that approaches Moulin Rouge, but without quite so much energy. In a wonderfully fun move, our town leader transforms, step by step, with the film, and he sings at the end, because the movie does.

It also switches gears at a moment’s notice. Moving from fairly quick comedy to intensely slow pseudo-drama with no warning at all is the sort of thing that can kill a movie. It works quite well here though, and it is obvious that it isn’t remotely a mistake. It’s a clear decision to present things in a certain way, with a definite purpose, and it’s a good choice.

It’s hard to present a clear picture of this movie, because you have to admit when much of your reaction is the result of a certain bias. I simply like the movies in this genre, and Blow Dry turns things up a notch. It’s a tongue-in-cheek dramedy (and that’s a strange thing to have to say for a start), it’s bitingly funny, and most of all it’s just a really good time.

The strange combination of actors (Hartnett fans are not typically Rickman fans and/or fans of this genre) and themes only add to the enjoyment… for me. It does what it needs to do, and if that makes people look at it funny, so be it.

Blow Dry is one of the better, recent entries into the genre, and mainly because it builds on the idea/s rather than sticking to a mold that doesn’t quite exist yet anyway.