HBO has been pushing the limits recently, and much of their effort has been in distancing their orignal programming from network television by way of becoming “that which could not be shown on network television.” Now, the idea that cable networks put out content that couldn’t make it to the normal airwaves isn’t new, but HBO seems dedicated to kicking that up a few notches. Eastbound & Down is no exception. 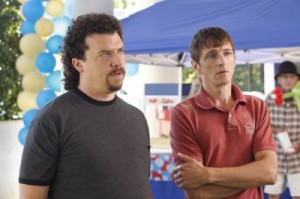 Eastbound & Down is the story of Kenny Powers. Kenny Powers was a baseball phenomenon a few years ago. The best pitcher to ever come out of the sport, he rose to fame almost instantly, and gunned down batters with laughable ease. He was also the cockiest ass anyone had ever seen, and the only thing he could manage faster than striking people out was pissing people off. Somehow, it made him more popular. He spoke his mind as only a vile and ignorant redneck can.

Things began to take a turn for the worse though, as we see in the pilot’s first few minutes, and Kenny’s arm started losing its speed. As 90+ mph pitches started turning to 80 mph pitches, and then to sub-75mph pitches, superstar Kenny Powers suddenly found himself bouncing from one team to another. Then he found himself staying at his brother’s house with no money and no means of support. 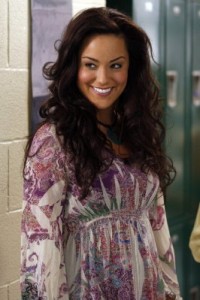 With few options, Kenny signs up to be a substitute teacher, a job he figures he can manage once in a while and still have time to figure out how to get back into the big leagues. His first job lands him back at his old high school, where he finds his old sweetheart is a teacher, and engaged to the principal. It’s just one more failure thrown in Kenny’s face, and though he is still filled with a bizarre arrogance, he’s on the downward spiral.

The show basically follows Kenny through his new, somewhat sad existence while he tries to figure out what he might do with his life. He chases his old flame despite her engagement, muddles through life as a gym teacher, and tries just about any ridiculous scheme to make a buck. We watch the school band teacher turn into a Kenny-wannabe, and we watch Kenny do a lot of drugs and spend a lot of time in his truck listening to his own self-improvement audiobooks. The road we’re on tramps along through the crassest vulgarity you can imagine, and an oddly unfiltered display of sex and sexuality.

It’s hard to get away from saying that the show is at times hilarious, but it’s the sort of show that makes you want to get away from it. Guest spots by Will Ferrell and similar semi-legitimizing efforts make things a bit easier, but the show is difficult to watch even as you’re laughing at it. Sure, there’s something about a washed-up, moronic smartass teaching gym class and instructing the group to pick on a certain kid who points out his fall from grace. It’s pretty funny. And, as often as it may be repeated, there’s something about the old benchpress gone wrong scene. But, that’s a lot like saying True Blood has some clever bits and interesting characters. You still want to avert your eyes at times, and you don’t know to what extent you feel comfortable admitting you watch it. 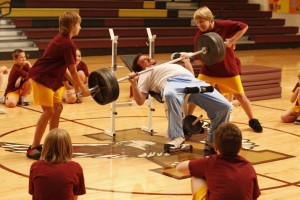 The fact remains, however, that the show is pretty funny. More importantly (now several episodes in), it brings up rather interesting questions about what HBO, Showtime, and similar are doing with such shows. Does weird sex with angry-looking vampires actually do something, or is just the same show with rather meaningless sex scenes thrown in for no ultimate purpose? Is Eastbound & Down just a simple comedy that could be toned down and retain a reasonable level of comedy? Do we have an F this and F that every five seconds just because we can like a bunch of 8th graders on a playground?

The truth is, I think there is a fairly legitimate purpose at work here. That isn’t to say that every instance of ultra-vulgar television has anything like a point to make by virtue of the vulgarity alone, but I think there is here. Simply put, this particular bastard just isn’t actually on display if you tone down his cussing, or his laughably direct persona. That leads to other theoretically legitimate movements of a show, for example, this character showing up at the principal’s BBQ where the church group is in attendance, is just not the scene episode with a version of the character who is saddled with filters.

That’s all true in a rather obvious and uninteresting way, but only if you don’t accept such characters as being within the scope of real discourse. Fair enough maybe, but foul-mouthed cretins don’t really exist on the front lines of war pictures alone. Sometimes they’re just funny, and it’s generally because of the character they are. It’s a tricky road certainly, but it’s still a road. The argument goes that comedy without enough brains just throws out a few curse words and hopes the idiots laugh, but it’s nonsense of course. As a similar example, Will Ferrell’s funnyordie.com video of the toddler landlord just isn’t funny unless she says, “You’re my bitch!” (and worse) That doesn’t keep it from being a cleverly-conceived and discordant juxtaposition. Indeed, it is what makes it so.