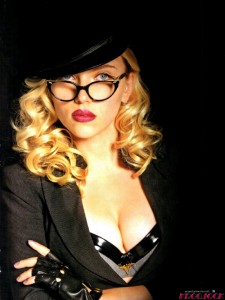 There was a point at which I was very seriously considering letting my review rest right there.  There isn’t anything else that’s really worthy of note about The Spirit, except in the negative, and the film is so bad it hardly seemed worth bothering.  Not only that, it’s bad (oddly) in such a dull way that it doesn’t even lend itself to the glorious spark of knocking it down.  Much like the curious case of its two main characters, it’s hard to see the point of beating up the indestructible… or indefensible.

The film is about (there’s a phrase I’m using loosely) a man who goes by the name The Spirit (Gabriel Macht).  He’s a resurrected cop who can sort of be hurt, but not killed.  Or something.  His nemesis is a villain named The Octopus (Samuel L. Jackson) who has the same talent.  Early on in the film these two are involved in a several minute “fight” in which they bash each other over the head with bizarre implements that appear out of nowhere for just that purpose.  It’s like an old Warner Bros. cartoon with anvils appearing for no reason.  This scene takes place despite both knowing they can’t actually do any damage to each other.  Come to think of it, it’s actually sort of nice that the movie lets you know just what kind of goofball nonsense you’re in store for right out of the gates.

During this exchange we will be introduced to Silken Floss (Scarlett Johansson), who is The Octopus’ henchwoman, or something, and we at least know that for a few minutes here and there we will get to say, “Well, I like that.”

There’s a plot that goes on at you, largely involving Eva Mendes (I think her character probably has a name) and the search for some blood that makes you immortal, or gets you out of your contract, or something awesomely magical like that.  Given the impervious-to-harm nature of our two… whatevers, we also naturally get around to the old cut him up into pieces trick.  It’s fascinating. 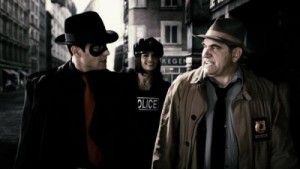 Frank Miller, also connected with 300, Sin City, and several incredible graphic novels, is the chief culprit here, and it’s an odd affair.  Those other admittedly overstylized films are (decent, but not great) efforts in translating the visual style of graphic novels.  There is a legitimately live discussion revolving around the style-to-substance ratio of these films.  Frank Miller apparently had an, “oh yeah, you want to see all style and no substance,” conversation with someone, and The Spirit was born.

There are certainly decent-looking segments of the film, and the theory behind the visual style is somewhat interesting, but you can’t possibly care.  The characters are devoid of personality, except in the sort of cartoon HI! THIS IS MY PERSONALITY! sense, and they are as pointless as they are hollow.  As with 300 and Sin City, there is a sensibility at work that I enjoy theoretically, but in this one there is no sense at all.

I can’t figure out how to make this thing produce negative stars, so zero will have to suffice.