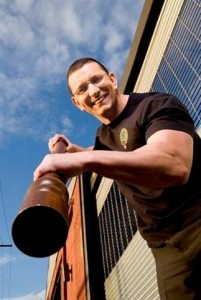 Robert Irvine is/was just the sort of oddball who could pull of a show based around goofy challenges, and moreover he was just the right guy to distract you from the fact that this is television and “really” working from the perspective that he might actually “fail” a mission is just stupid.  He’s also just a big, raging dork, and it was fun to cheer him along as his bizarre energy rush flew around at people who could barely get out of the way.

One of the coolest aspects of the show was this wacko’s bio, and just because he was such a freakishly boisterous ball of energy.  In any event, his bio was impressive.  You may know the story, but his bio claimed he:

was a knight, and therefore actually Sir Robert Irvine.

worked on Prince Charles and Princess Diana’s wedding cake. (this is… Hello… a claim in his book Mission: Cook! from 2007)

His bio also claimed that he cooked for four different U.S. Presidents, and some sort of claim to be a White House chef was thrown around in various forms.

There were actually a few other things, including a food-related degree from Leeds, but most of them escape me at the moment.

Then, somewhere around a year ago, the scandal hit the fan.  It turned out that pretty much everything about him was fake or wildly misrepresented.  Leeds never heard of him, it turns out he was more or less in the general vicinity of the royal wedding cake when it was being made, he isn’t a knight (and doesn’t own a castle, though he claimed he was given one by some royal personage or other), and the White House chef vehemently declared that the guy never came within 100 yards of any President… ever.  Well, something like that anyway.

So, Wham, he was gone, there were press releases and so forth, and the show had a new host.  It all struck me as rather – can’t The Food Network make a call or something – but, there it was.

Now, in a move that is as unshocking for The Food Network as it would be shocking for any other, Robert Irvine is back hosting Dinner: Impossible again.  Tune in Wednesdays at 10pm to see new episodes… seriously.  His new bio, which glosses over things, and ignores others (and let’s face it, could be almost anyone’s bio… come on, catered an after party? Who couldn’t put that on their bio?) reads thusly –

As host of Dinner: Impossible on Food Network, Chef Robert Irvine serves stunningly creative dishes both for intimate gatherings and for huge crowds, all without warning and at a moment’s notice. On the show, he has cooked on a desert island, in an 18th Century kitchen, in an Ice Hotel, for cowboys on a cattle drive, for master instructors at the Culinary Institute of America and at the Inauguration of Pennsylvania’s Governor.

A native of England, Irvine joined the British Royal Navy at the age of 15 and his skills in the kitchen soon came to the attention of his superiors. As part of his service for the Royal Navy, Irvine was selected to work on board the Royal Yacht Britannia where the Royal Family and their entourages regularly dined. During his time training US Navy chefs as part of a guest chef program, Irvine worked in the White House kitchens and his creations were served to high-ranking government officials.

In over 25 years in the culinary profession, he has cooked his way through Europe, the Far East, the Caribbean and the Americas, in hotels and on the high seas. In his career, he has also had the opportunity to serve 6,000 servicemen and women on a US aircraft carrier and plan the menu at a spectacular celebrity-studded after-party at the Academy Awards.

From what I’ve been able to gather from upwards of several minutes of research on the web, the overwhelming response from Food Network viewers is generally – Hooray! Robert Irvine is back!