BBCAmerica calls Coupling a cross between Friends and Sex and the City. I don’t really see that as a particularly accurate description, mainly because neither of those shows is as funny or intelligent. Coupling is, however, one of the best British comedies ever, and that’s definitely saying something (plans for an American version are already in the works). It’s also a perfect opportunity to use the phrase ‘devilishly funny’. 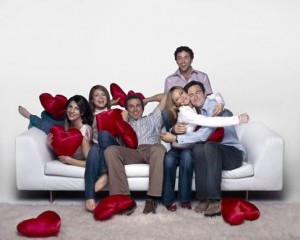 Steve (Jack Davenport) is closest to what we might call our central character. He’s the fairly normal one. Think along the lines of a combination of the better qualities of Chandler and Ross, but with a more sarcastic sort of wit.

Susan (Sarah Alexander) is the main female figure. She’s the smartest one, with the least obvious character flaws. Steve and Susan’s relationship is the main focus (if anything is) of the show.

Jane (Gina Bellman) is something of a thinking man’s Chrissy Snow. She’s a vegetarian, but she eats meat. Just because a man is homosexual doesn’t mean he doesn’t date women. If a guy breaks up with her, and she wants the relationship to continue, she just doesn’t accept. It all makes perfect sense to her.

Patrick (Ben Miles) would then be the thinking man’s Joey, if such a thing can make sense. He’s the one who gets all the girls, and isn’t all that bright.

Sally (Kate Isitt) is the one that’s constantly insecure about her looks and/or aging. Also smart and funny, she’s a bit more serious. She rations her smiles, choosing only to smile at men who are suitable to date, because you’ve only got so many smiles before the wrinkles.

The first season DVD contains all six episodes of the first season. American shoppers/audiences who aren’t familiar with the fairly standard British idea that ‘season’ equals ‘around six episodes’ may be disappointed right there. It’s well worth the price though. 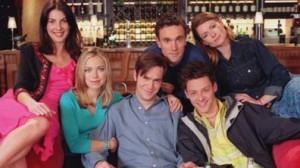 This is, to my mind, the best first episode of a comedy ever. It dives right into the show, introduces the characters excellently, developing them quickly and laying excellent foundation.

We meet Steve as he is attempting to break up with Jane. He’s tried to dump her for weeks. Somehow, each time he tries, they end up having sex. Well, by somehow what I mean is that she suggests it. He’s serious now though, really serious. So serious, in fact, that he very nearly manages it. Susan is simultaneously breaking up with Patrick, sort of.

In television’s only example of asking girl B out while having sex with girl A… no joke, while… Steve encounters Susan and asks her out.

On the night of their date, the entire troop arrives. Jeff, Steve’s best-friend, is worried that Steve and Susan might talk about Jeff’s attempt at dating co-worker Susan, and has tagged along to officiate over the conversation. Patrick shows up with Sally, Susan’s best-friend, accidentally, as they are now on a date, Sally having ‘heard good things about Patrick’ (wink wink). Jane, working on the theory that she and Steve are still dating, has tracked him to the restaurant.

Hilarity ensues. And, does it ever.

Steve and Susan’s first date doesn’t seem to be going very well, and Steve is a bit befuddled. Susan rationalizes things though, and puts a smile on the situation. ‘We all bring our baggage to a relationship’, she quips at Steve, ‘why not invite it all out to dinner?’

As we know from the title, much of the comedy revolves around ‘Size’. Steve and Susan are having their next first date (the one without so many people) at Susan’s. Much discussion turns on whether or not Susan’s invitation, and/or its precise wording, means simply dinner, or dinner and sex. Once at dinner, Steve and Susan explore the differences between being a man on a first date, and being a woman on a first date. When Susan levels the playing field, giving up her ‘first date advantage’, Steve finds the new territory rather daunting.

Meanwhile, Susan has clarified some of her statements about Patrick, and Sally is more interested in him than ever. Though her interest in him diminishes with everything she learns about him (and with every word he utters), her ‘interest’ in him ‘grows’.

Jeff, on a related note, is becoming unnerved about the fact that absolutely everyone seems to want him to go to the bathroom with Patrick.

Back at Susan’s, Steve can’t seem to get the remote to work, and he’s introduced to Susan’s ‘cheaper by the dozen’ attitude toward battery purchases. If things weren’t awkward enough, Steve has his own ideas about Patrick, and the fact that he is Susan’s ex. Possible belittlement ideas, as it were.

Jane’s aunt has died, and she wants Steve to go to the funeral with her. They dated for four years, and her family doesn’t know they’ve broken up yet. Naturally, Susan isn’t keen on the idea of Steve masquerading as Jane’s boyfriend. Before you know what’s happened the whole crew is going to attend.

Jeff, to add the nudity to the mix, has an interview in a few days. To try and alleviate his stress over the situation it is suggested, naturally, that he imagine the interviewers naked. Jeff starts practicing with this idea, leading to much calm, but soon he can’t turn it off, and he finds himself at the funeral with a lot of old people.

The guys sit around the bar contemplating the possibility that Susan has tidied Steve’s apartment. Really, really tidied. You know, everywhere. Back of the top shelf of the closet. Everywhere.

The possibility that Steve might love Susan sends Jane to therapy. Her ex-therapist has no better luck becoming Jane’s ex than Steve did, and Jane ropes her into coming to a dinner party our crew is having. The party becomes a whirlwind of tension with Jane putting forward her bi-vegetarian beliefs, and everyone assuming that Jane’s therapist is her new girlfriend. Things come to a head when Susan defies Steve to justify the existence of something in his VCR with the title Lesbian Spank Inferno… and he tries.

Episode 5 – The Girl with Two Breasts

This is the series’ first attempt at straying from the main focus being on Steve and Susan.

A gorgeous woman has come to the local hangout, and she seems interested in Jeff. He finally works up the nerve to talk to her, only to discover she doesn’t speak any English. She’s from Israel, and her not-nearly-so-beautiful interpreter isn’t much interested in a chat up by proxy.

Jeff sees her again the next day, and tries to manage some communication on his own. The attempt deteriorates into the instant classic ‘bucket of ears’ sequence. By the time it’s all over he thinks he’s managed to arrange a date with her. Unfortunately, she thinks he wants to date her interpreter.

Episode 6 – The Cupboard of Patrick’s Love

A spin on the whole ‘videotaping’ idea, the crew learns that Patrick has an entire closet filled with tapes of women he’s slept with. It comes out that he’s got a tape of Susan, and Steve isn’t happy. Susan arrives at Patrick’s to find that the boys are already watching the tape of her. The ‘videotape’ debate goes into heretofore unexplored areas, but Susan is mad for other reasons. ‘Has anyone noticed,’ she demands, ‘that that isn’t me!’

The boys quickly switch gears, however, avoiding discussion with Susan, when it looks like Patrick has recorded something else over the rest of the tape. Everyone pauses to see what’s coming. The Wicker Man!

As if it weren’t embarrassing enough for Susan, having everyone see her naked (or not), her attempt at reconciliation (of the naked variety) with Steve doesn’t quite work out as she planned. Like most things in the show, it’s not as private as she hoped.

Coupling is an absolutely hilarious show worthy of being owned, repeatedly watched, and memorized. The interactions are very real (except when they’re not), and the writing is simply amazing.

Keep in mind also that these are half-hour episodes, but they’re British half-hours, which means they are actually 30 minutes long.

*This review was originally published in 2003.  BBCAmerica still runs the show here and there, so you can catch it, but the DVD series are fantastically priced.