There are probably spoilers here, but the movie is also probably better if you read this first anyway.

Somewhere, buried fantastically deep, but still visible, there is a great movie residing within the misfire that is X-Men Origins: Wolverine.  Without great alteration to the script, a film could have been made that understands why comic books are popular, instead of the sad, summer explosion fest apparently made by someone with an intense dislike of them. 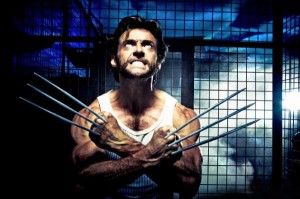 Hugh Jackman has already proven that he rather understands the character Wolverine, and that comes through to some degree still, but that is where any connection to the source/s ends.  Gavin Hood, our director, went from the strong and interesting Tsotsi, to the solid Rendition, to a comic franchise, and the move is ridiculous for all concerned.  I suppose I would take the fat paycheck to direct a huge budget film too, but if you don’t like or understand comic books, don’t put them on film.

What’s most depressing about sitting through Wolverine is that it has all the pieces, it just has no idea what to do with them.  The film even references the idea that comic books are the modern day’s version of mythology, lays the idea out rather clearly, but doesn’t remotely understand the fact.  The movie seems to react like a stubborn child, forced to mention mythology (it’s how Wolverine gets his name), and because it is forced it pointedly refuses to pay attention, and is only irritated at the time away from blowing things up.

In the shadows of Wolverine (whether in italics or not), you find what is actually a rather fascinating tale.  A story Bulfinch might be proud of, with yes, more or less indestructible, immortal characters, but also with heart, purpose, and lessons for humanity.  It’s a story about discovering you are a mutant at an early age, when you kill your own father no less, and living more than one hundred years as an outcast and freak.  It’s about spending that hundred years next to your brother, a mutant of similar power, and watching him give in to the animal, taking great pleasure from slaughtering people for more or less no reason at all.  It’s a story about fighting that desire in yourself as well.

There is also a brilliant storyline about the sibling rivalry between Wolverine and his brother, Sabretooth (Liev Schreiber).  Basically, two indestructible mutants walk into a bar (which actually happens in the film), and one of them is haunted by the idea of being “better” than his brother.  There isn’t even a legitimate sense in which either could be better, but it won’t get out of Sabretooth’s mind that he needs to be.  In a move very similar to the rivalry in Big Night, one brother cares about being better and one doesn’t, and that not caring itself is evidence of in fact being better, because if you are better than someone else you don’t care about becoming better.  It’s tricky. 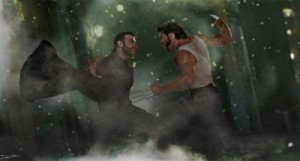 The fights between brothers make no sense, in some ultimate sense (they can’t kill each other), but are more about emotional outpourings than destruction.  Like battles on Olympus, which are outrageously unlikely to accomplish anything, but sound cool when people tell the story, the fighting is more analogy and/or expression than anything.  Nothing says I’m really mad at you right now like sticking your bone claws into the guts of someone who can feel pain, but can’t be killed.  Did I do it to kill you?  Obviously not.  There is meaning there in relation to the things we really do in relationships, but this isn’t a movie that cares.

There is also a story about William Stryker, a military figure running covert ops, who is trying to make an ultimate mutant.  He enlists Wolverine, Sabretooth, and several other mutants early on to help carry out the missions that lead to his ultimate goal.  His story, and its basis in revenge and hate, mirrors Wolverine’s story (if we actually saw it) and his own efforts to not become a mere killing machine at the same time Stryker aims to make one at any cost. 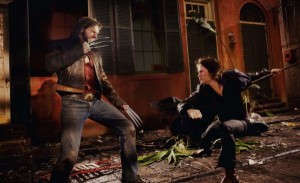 None of this, however, is remotely what you get from the film.  Oh, it’s there, but you’d think it was rather upset about it.  There’s a lot of stuff blowing up, or cool mutant trickery, because it’s just fabulous.  We’re too busy including mutant cameos for no real reason, because ultimately comic fans are pretty stupid, and if we tell them Gambit is in the thing they’ll show up all giddy and fidgeting.

The theoretical depth of story I have described is only existant in the most technical of senses.  You only find it there if you already know it’s there.  Stryker will say that his son, a mutant, killed his wife, but you’ll get no further story, and there is nothing to the character to build depth around.  He only says it in the “Fine. There.” sort of a way you find from a film that is repeatedly told it has to actually have some story connecting the chases and fights.

After all that, it is somehow not all that bad.  It’s kind of fun and runs around a bit like a clown, and it doesn’t take itself too seriously.  It’s a summer action gig that is somewhat annoying in its lack of real effort, but passable… I suppose.  While it may not deliver even the remotest sense of appreciation for comic books, or understanding of why they are actually pretty valid forms of art (see Dark Knight for a real shot), it also isn’t blatantly stupid.  Until the end.