If you’ve been living under a rock, and haven’t heard of Dr. Horrible’s Sing-Along Blog, you’ve got a new chance to experience it in its fullest glory with the DVD release on June 2nd.  Now, you’re thinking that you can watch it free online, and that’s true, but the bonuses on the DVD are well worth the price.

For the uninitiated, the show is a Joss Whedon creation, and stars: Neil Patrick Harris, Nathan Fillion, and Felicia Day.  It’s a musical, and comes to us (at least initially) by way of Dr. Horrible (Harris) putting out his video weblog on the internet.  A wannabe evil-doer, Dr. Horrible struggles to get his evil weapons in working order, and dreams of getting the respect he deserves, whether he’s really managed anything evil or not.

His other driving ambition is to work up the nerve to try and get a date with Penny (Day), the girl he frequently stalks sees at the laundromat.  Yes, he’s that sort of world-class villain… the kind who shuffles off to do his laundry.  Curtailing his efforts on both fronts is Captain Hammer (Fillion), the egomaniacal do-gooder with the great smile.

Most frustrating, naturally, is the fact that Captain Hammer isn’t very bright, and sort of bumbles his way into everything Dr. Horrible wants.  I mean, can a semi-competent villain catch a break, or what?

Did I mention it’s a musical?  Yes, wonderful songs are everywhere.  Sound crazy?  Yes, it’s that too. 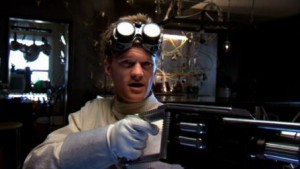 Like I said, you can get your fill of Dr. Horrible online free, in fact, I’ll include it here, but you won’t get the bonuses.

First, and most important, you’ve got Commentary! The Musical. It runs the entire length of the show, as you’d expect from a commentary track, but it is all singing, and really has nothing to do with what you’re watching.  The cast and creators sing about each other, the writer’s strike, how fabulous commentary tracks are, and just about anything else.  It’s absolutely hilarious.

There’s also a real commentary track by the cast and creators, and it’s rather humorous as well.  If you like the show at all, you’ve got to give the commentary a try.

There are three behind-the-scenes features focusing on the creation of the series itself, the music, and a sort of surprise at the popularity feature.  These behind-the-scenes are not particularly long, but you’ve already got the commentary with everyone involved.  They are decent efforts though, with the cast providing interesting footage.

You also get the top 10 video submissions by fans applying to join the Evil League of Evil.  That’s the group led by Bad Horse that Dr. Horrible hopes to join.  A couple of these are pretty silly if you ask me, but a few of them are definitely worth watching.

Also included as Easter Eggs are: a blooper reel, rehearsal footage, and interviews with the members of the Evil League of Evil.

A DVD release of something you can watch free is a novel idea, but it’s a must own for fans.  Even if you’ve seen it, it’s nice to put it up on your TV.  And, even if you can get it through Tivo‘s YouTube accessibility, or via some other high-tech hoohaa, the DVD clarity is still worth it.

Still, you’ve got to make it worth the money when you’re putting together a package to try and sell something freely available, and this one does just that.  The show in itself is wonderful, and the additions here are brilliant.