The first volume of the BBC drama Mistresses is hitting stores tomorrow, June 9th, and it’s a package you don’t want to miss.  The show follows four friends through their increasingly complicated lives, and as the name implies, they’re all floating somewhere in the general realm of infidelity. 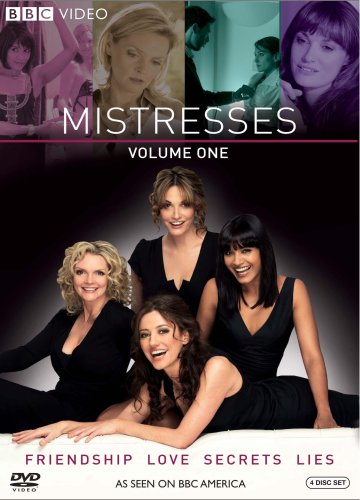 It’s a bit Sex and the City, but with a base that leans much more toward real drama.  It’s still has its moments of fun, but it seems to be trying for the more serious mood of the same audience.  It also has, for my money, one of the best claims to realism in years.  People actually talk like this, and more importantly, people actually go through their day like this.  It’s hectic, busy, and filled with a lot of trying to get through the day.  The drama sneaks in where it gets a chance.

The show stars four well-known British actresses in an interesting amalgam of character directions.  Katie (Sarah Parish) is a respected doctor, and to some degree or another she is the leader of the group of friends.  Assuming of course that groups of friends have leaders.  She’s been having an affair with a terminally ill patient who dies before the end of the first episode.  She’d been having an affair with him for two years, and kept it from her friends.  Now his son is determined to find out who dad’s mistress was, and Katie is becoming jumpy.

Trudi (Sharon Small) is a 9/11 widow starting to date again, and with generally disastrous results.  Despite the six years alone, even the suggestion of dating makes her feel like she’s cheating on her husband.  It doesn’t help that she keeps getting mysterious phone calls, with no one talking on the other end, which she thinks might be from her husband. Siobhan (Orla Brady) is a successful, married lawyer who is losing interest in her love life at home, and doing something about it.  Her husband wants a baby, and everything about intimacy and romance has been sucked out of their life.  When a coworker becomes rather flirty, she doesn’t stop him, and she continues to stumble down the trail of not stopping him for quite some time.

Jessica (Shelley Conn) is a fun-loving, anti-commitment… well, I don’t want to say nymphomaniac, but… I guess I just did.  She’s isn’t a fan of anything to do with relationships, and though she finds herself planning weddings once in a while, she rather wishes everyone would stop talking about romance at her.

I was intrigued when this show first came to BBCAmerica, and I was quickly hooked.  Like a lot of my favorite British shows, Mistresses has an outstanding pilot.  It lays a lot of groundwork quickly, but it does it in a way that lets you get pulled in.  The show kept me going by really tearing into its characters, rather than relying on cheap, dramatic spins.  The acting is quite strong from everyone involved, and the show has a unique directing sensibility behind it that manages to throw the most possible interest into every scene. The DVD set is 12 episodes on four discs, and it is really a nice collection.  It has two very nice special features which are going to really appeal to fans of the show.  The first is an interview feature which runs a little under 30 minutes.  First we have all four of the female stars together, and the conversation runs just about every direction.  It then moves on to a group interview with the men from the show.  It’s quite a fun feature actually, and there’s a bit more to it than a lot of such things you find.  The same is true of the other special feature, which is a behind-the-scenes look at the show.  These making of features are pretty standard fare, but this one is above-and-beyond comparatively.  It’s a full thirty minutes, includes a lot of interview clips, and really delivers on taking you through an exploration of the creation of the show.  A lot of these will find cast and crew in an excuse to tell you how great the show is, but there really is something better going on here.

Below you’ll find a few clips that give a pretty good feel for how the show runs.  For more info and excerpts from cast interviews provided by BBCAmerica, check out my earlier article on Mistresses here.

Check out the official site