There are some stories that seem incredibly simple, if you boil them down as far as they go, which are actually very complicated. “She loved him”, is pretty simple on its face, but it is, of course, one of the most complex of stories.

“That is our mountain”, seems rather simple as well.

This movie (whose name defies frequent mention) is about just how complex that story really is. 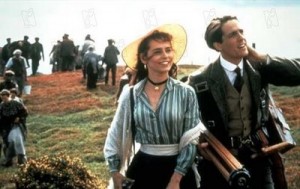 We enter that story as cartographers, on their rounds measuring the heights of mountains (and hills), come to the sleepy village that lies in the shadow of Ffynnon Garw (you are on your own for pronunciation), in the south of Wales. Trouble rears its head pretty quickly, as these cartographers mention some doubt that Ffynnon Garw is more than a thousand feet, the height required to be deemed a mountain. The residents are not at all pleased with the prospect of having their mountain disparaged by labelling it a (scoff, bewilderment, dander rising) ‘hill’.

Our main man of the story (The Englishman in question) is Reginald Anson, who is played by Hugh Grant . Anson is the curiously shy, somewhat ‘guffawish’ (in standard Hugh Grant form) assistant to Mr. Garrad.  During our preliminary introduction to the story, we meet many of the village residents, and perhaps, the spirit of Wales. At least, we are supposed to assume that we are being introduced to the spirit of Wales.

Our cartographers first encounter Morgan the Goat (Colm Meaney — Mystery Alaska, Snitch, and also of Star Trek: The Next Generation fame – Meaney is, by the way, a seriously underrated actor). In Wales, we are led to understand, last names (and moreover, names in general) are so common that some reference to what a person does (or I suppose, is) is usually attached to a person’s name. Thus, Williams the Petroleum, Davies the School, Johnny Shellshocked, and Morgan the Goat.

Now, as our story goes, it is all pretty simple. The cartographers measure the mountain and find it to be slightly under twenty feet shy of the requisite thousand. Thus, it’s a hill and will not appear on the maps made by England (gasp, swoon). Of course, that is something, as they say, up with which the village residents will not put. In their discussions, it is brought up that there are many mountains around the world with burial mounds at their summit, and these manmade things are included as part of the total height. The solution becomes simple, all they need to do is add about twenty feet to the top of Ffynnon Garw.

They set out to do so. A bit of hilarity ensues as a result of the need to keep the cartographers around so that they can measure again. A little sugar in the gas tank, and the conspiracy of everyone in the village works to confound the cartographers’ every effort to leave.

Throw into the mix the fact that the reverend of the village does not like the idea (exactly) and wants the earth that is moved to the top of the mountain to come from the village (simply digging a hole at one part of the top of the mountain is too easy), and there is a lot of work to do. The village comes together, at the direction of Morgan the Goat and the reverend (who do not like each other much, for fairly obvious reasons – especially if you ‘get’ Morgan’s name) to hold the English cartographers hostage while the struggle goes on to build the mountain up. 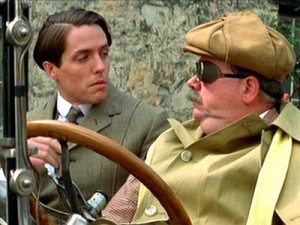 The movie provides a wonderful look at its characters, and is filled with some great supporting acting, as well as some overacting typical of the subject matter. Mr. Garrad’s drunkenness in one scene, for example, doesn’t look much like actual drunkenness. Rather, it looks like ‘stage play’ drunkenness if you will, which is to say overdone drunkenness. It is somewhat difficult to say that Hugh Grant is acting well exactly, as he is merely acting the same as he is in everything. However, the part seems particularly well-suited to who he plays, so it works.

The supporting cast is the heart of the matter here, and we get a very real feeling of the village community that we want, in a manner similar to Waking Ned Devine. And, if you like that movie I think it is safe to say you will like this one.

During the course of the film, one of Morgan the Goat’s schemes is to have a close friend of his, Betty (Tara Fitzgerald) make nice (wink wink) with the cartographers in further hopes of delaying them. Naturally, and one might say rather simplistically, she and Hugh Grant’s character fall for each other. In the end, Grant is helping the villagers with their scheme.

Of course the truth comes out when they are faced with the fear of some possibility of losing their mountain, their tie to their identity. It’s simple really. That’s a mountain whether it’s a mountain or not. It’s ‘mountainness’ is not anything about the physical thing itself really, it is merely something we have projected onto it, and if it isn’t a mountain we’ll make it one.

Add to the basic need for Fynnon Garw to be a mountain, the fact that the village is in the midst of a serious struggle against loss in general. Taking place during war, the movie tells us of the villagers all too real attempt to overcome the hopelessness of a life that seems filled with nothing but having things taken away. The war takes our men, and now our mountain might be a hill. How, the movie asks, do we tell our boys when they return that while they were away fighting Germans, the English came and took the mountain?

Now, I’m going to give the movie away (I suppose) and tell you that they succeed, and in the end, Ffynnon Garw is deemed a mountain, and in one sense or another they all live happily ever after.

At the very end of the movie we are shown some rather old people standing at the top of Fynnon Garw, and the narrator tells us that just prior to filming this movie, Fynnon Garw was measured again and determined to now be a couple feet under that dreaded thousand once again. The mound they added settled some it seems. We see the village making its way up the mountain so as to set to work once again.

I’m only telling you that so that at the end you don’t fall for it. It isn’t true. Not precisely anyway.

First off, there is no such mountain (or hill) as Fynnon Garw. Though Monger credits this as the story as told to him by his grandfather Ivor Monger (and the movie is presented that way, the narrator being a grandfather telling the story to a grandson), it is, according to those at the real place, a work of fiction.

The real place is called Fynnon Taf (or Taff’s Well), and the mountain is Garth Mountain. The movie wasn’t filmed there, however, as the village had been overly ‘built up’ since the time in question. There are, in fact, burial mounds at the summit of Garth Mountain, and since the release of the movie a small plaque has been placed at the top of the mountain which explains “the truth of the matter”.

What is true is that there is some extra height that has been added to the place, and you don’t want to be calling it a hill. Not in Fynnon Taf anyway.