Whatever your thoughts upon hearing of yet another version of Peter Pan, you couldn’t have been more skeptical than I was. Did we really need another incarnation of the permanent child? But, I made a mistake in forming my expectations, and you might have as well. If you’ve read Barrie’s book, you know that the problem isn’t repeated tellings of his story in the movies, the problem is that we’ve never really had a telling of his story in a movie. Now we have, and that’s an altogether different matter. 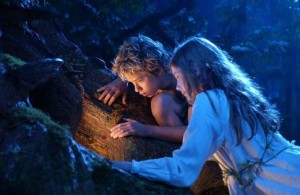 Disney’s Peter Pan, and the countless versions of the story that have been spawned far more from that than from Barrie’s book, are certainly fine enough, but they’ve lost all but the barest glimpse of any point. Just for a start, while all versions have something to say about growing up, for most of them it only comes almost accidentally by way of the need to end the story. It’s not exactly that we’re trying to say anything, but Wendy has to get home somehow. Worst of all, at the very end of the movie, you aren’t supposed to be jealous of Peter Pan, triumphantly flying off to stay a child forever, you’re supposed to feel sorry for him, limping away unable to feel. This is the only movie where you get any serious sense of that.

The lion’s share of the credit for Barrie’s story and ideas finally making their way to the screen goes to writer/director P.J. Hogan. Hogan has finally come back to a place where he must be considered very seriously. After the remarkable Muriel’s Wedding, he gave us the lackluster and unimpressive My Best Friend’s Wedding, and followed that with the unknown, but well crafted Unconditional Love. Combining fun, adventure, worthy scene-specific approaches to the subject, and a very real attempt to bring the points of Barrie’s story to life, Hogan’s Peter Pan may be the latest in a long line of incarnations, but in a very real sense it is actually the first and only.

The one small flaw in the film is that Jeremy Sumpter, who gave us a fine performance in 2001’s Frailty, is not exactly perfect as Pan. He holds his own, but he does stand out as not managing the level of what and who surround him. First-time actress Rachel Hurd-Wood delivers a surprisingly well-rounded and able Wendy. Jason Isaacs, who has not impressed me much in the past, may have found his niche in fantasy adventures for adolescents. His first run as Mr. Malfoy in Harry Potter and the Chamber of Secrets was not at all bad, and here he’s better than he has any right to be. His Mr. Darling is wonderfully inept while retaining a hidden depth that allows for his transformation, and all with Mr. Darling occupying minimal screentime. His Hook is decidedly dastardly (parents may be surprised to be quite seriously warned to inspect the dastardliness before allowing their children to partake), but is likewise possessed of a roundedness that makes his final battle breakdown plausible. Now, before this sounds like far too much praise, let’s keep in mind that this is Peter Pan not Shakespeare, and keep in mind that I’m keeping that in mind. Still, there is perfection of a light-hearted role aimed at younger audiences which is nevertheless able to deliver true emotional depth just as there is perfection of any other role, and this is it.

There’s much talk of the ‘sexuality’ present in this version of Pan, and Wendy’s ‘special kiss’. A girl’s/woman’s ‘special kiss’ that she must give away only to just the right man, and that a child obviously can’t get from a mother is not exactly what you’d call buried subtext. I wouldn’t make too much of it though, and what’s prevalent in the film is ‘sexual tension’ in a sense rather removed from the sense in which you’re going to see it elsewhere, but it is there. Leaving your parents, not having time to play, and losing your imagination and sense of adventure may all be part of ‘growing up’, but without sex and a serious conflict of emotion it’s all nonsense. Of course, this is precisely where every other movie version of the story has gone wrong. But, though there is a bolder manifestation of sexuality in this film, there are other emotions that are also better developed, and they’re more important besides. Hardly a frame goes by without someone envying something. Wendy envies Peter. Tinkerbell envies Wendy. Hook envies Peter. Peter envies everyone. We also get varied, and fairly sophisticated all things considered, looks at parental roles. And, don’t overlook our vastly improved portrayal of Tinkerbell. Given to us by Ludivine Sagnier (of an impressive French film resume, and Swimming Pool), Tinkerbell is one more childhood step past Peter Pan. Where Pan is stuck in near-but-slightly-pre-adolescence, Tinkerbell is early childhood personified. As the film tells us, she isn’t all bad, but she’s only able to have one emotion at a time. Like some full-grown toddler (only tiny and with wings) she’s often cute as can be, and filled with good… well, filled with intentions, but often she’s a right bastard. Tinkerbell’s dichotomy of emotional presence, willing to sacrifice herself to save the one she loves, willing also to kill a rival to his affections, comes through like a Freud-centered dissertation. 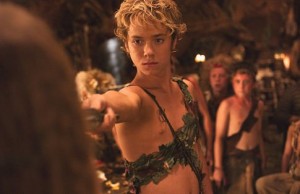 Of course, it wouldn’t be Peter Pan if we got the least bit bogged down in this sort of thing. Credit Hogan again with delivering the spirit of adventure so necessary not only to the purpose, but to the ability to seriously relate our themes. No small task when we’ve seen it all before, several times no less. From the smallest of joyous humors, like our nanny dog dispatching one of the children to a bath, to the grandest of flights through infinity, battles in the rigging, or dances with pixies, Hogan puts imagination on film. The Darling’s neighborhood, though upper-middle class with bits of posh in all the right spots, is brilliantly ‘child’s view’ small, boring, and stagnant, without becoming overly obvious about the statement. Neverland contrasts the ‘real’ world by subtle degrees with its slightly too bold, bright, and beautiful panorama of life and spirit.

If you’ve read Barrie’s book and have abandoned all hope of seeing the story as you remember it, don’t pass up any opportunity to catch this one. If you’ve only known Pan from the movies, you owe it to yourself to see what the story is supposed to be about.