The world’s longest continually running police drama has a new DVD release, and the set serves as a great jumpstart for U.S. audiences.  With seven episodes on three discs, the Set 1 offering showcases some great episodes of the incredibly long-running series. 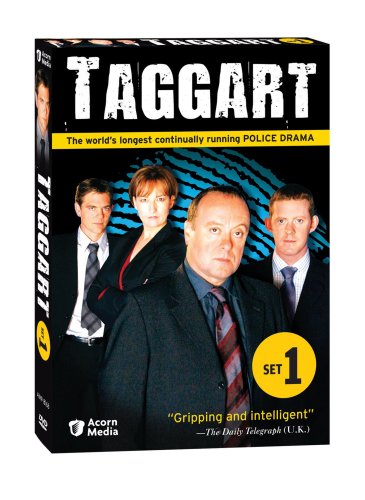 Taggart takes place in Glasgow, and follows a four-person team of detectives.  Burke (Alex Norton) is the chief inspector leader of the group, and he’s an old-school detective who has been around the block so many times he’s worn through the pavement.  He’s the kind of brusk, ever-straight-forward cop that in real life would give the initial impression of semi-incompetence.  Burke knows what he’s doing though, and knows how to handle his team.

Ross (John Michie), Reid (Blythe Duff), and Fraser (Colin McCredie) are the rest of the crew, and they’ve all got their quirks about them.  Whether they’re overly by-the-book about everything, or typically “fresh meat,” the teams strengths and weaknesses balance out to a workable unit.

A quick glance at the show will probably lead one to add it to the pile of crime dramas that have little to differentiate themselves from each other.  On U.S. television, that’s a pile that clogs primetime to the extent that a surprising percentage of the week’s offerings are completely interchangeable.  Taggart sets itself apart not only in its far darker look at the world police live in, but also in its vastly superior attempt at the reality of investigations and the crimes themselves. 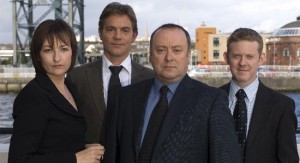 Crimes go wrong, and are committed in the first place, for strange reasons, and are often the work of desperate people.  That gives us pieces of the puzzle that don’t make a lot of sense, and quite regularly don’t seem like pieces in the first place.  Taggart is one of very few shows I’ve seen that lay out criminal investigation as something much closer to sorting through a giant mess, as opposed to following the tidy steps which all clearly lead to the next.

The show has a solidly “British mystery” feel to it, for those with the experience to pull meaning from that.  Beyond that, it has a harshness to it that makes it far more compelling than standard cop fare.  It’s not trying to jazz things up, or deal out ratings zingers, or get fans to the stars’ blogs.  It just dishes out good stories, and delivers something like the feel of being on a real ride-along — you’re seeing what’s real, and it’s slightly annoyed that you’re there.

The DVD set includes only one special feature, but it’s a pretty good one.  It’s a total of about thirty minutes of video in a variety of sections which cover the locations of Scotland that get a lot of exposure in the show.  They don’t actually give you much of anything about the show, but they’re pretty interesting.