Inkheart, based on the novel by Cornelia Funke, is the story of a man who has the power to bring books to life simply by reading them aloud.  While the possibilities there already stagger the imagination, this is the tale of the magical talent gone somewhat wrong, and the struggle with the unhappier side of getting too close to fairy tales.

Mo Folchart (Brendan Fraser) is scouring the world for books, and his teen daughter has caught onto the fact that it is one particular book he’s after.  The movie begins when, after about a decade of searching, Mo finally finds another copy of Inkheart.  He hardly makes it out of the bookshop before being confronted by Dustfinger, who wants the book, and warns Mo that Capricorn knows where Mo is.  As we just left Mo, his wife, and daughter Meggie in the intro sequence ten years earlier, we have no idea what’s going on.

It turns out that Mo had no idea he had the power to pull characters (and other things) out of any book he read until he was reading Inkheart to his daughter.  Capricorn, the despicable villain of said story, and one of his chief henchmen were brought out of the story.  Along for the ride as well was Dustfinger, a semi-magical entertainer, and more or less good guy.  Unfortunately, the rule seems to be that when you bring something out of a book, something goes in, and in this case it was Mo’s wife.

Fast-forward to the present, and while Mo has been searching the world for a copy of the obscure book in order to get his wife back out, Capricorn has been destroying them and building his power.  Capricorn has found another Silvertongue, as those with this power are called, but he isn’t very good at it, and more than anything Capricorn wants Mo under his control. 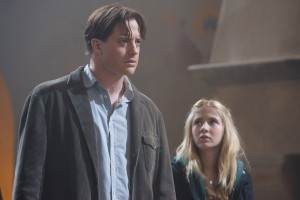 What follows is rather a jumble of adventure as we run headlong through capture, escape, attack, retreat, capture, all while trying to get a copy of this damned book.  There are unicorns, minotaurs, chases, and a giant smoke monster, and all of it is thrown at you with reckless abandon like flights of fancy gone wild to the point of their own destruction.

But, analysis of Inkheart is not an easy affair, even if its subject, manner, an demographic make it seem so.  Much like the heavily-referenced Wizard of Oz (which let’s face it, under the wrong lens is a stupid mess of disconnected nonsense filled to bursting with plot holes), Inkheart is only in the loosest possible sense about what happens.  It is instead about what fantasy means as a general idea, and it is about what characters are… even if they’re us. 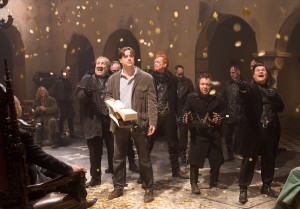 Inkheart is a story that can’t go five minutes without telling you that it not only loves books, but has an almost fanatic appreciation for what it believes books are.  It is not a story that has Mo’s wife in some state of pseudo-death, or otherwise non-existence by being trapped in the book.  As we see with other characters, whoever goes in a book remains as alive as you or I, just in another world.  It is a story that defies you to produce the legitimate argument that what happens in my mind because I imagine it is less “real” than what happens in my mind as the theoretical result of some external source.

In the end, the story is a bit of a trick anyway, because it isn’t about our Silvertongue and his family, or heroes, or nogoodniks, or magical creatures.  It’s about Dustfinger.  A character made real who was written as mostly goodish, and wanting desperately to do the right thing, but is ultimately a serious coward at heart.  As, I suppose, a real man, Dustfinger comes very close to doing the good deed several times, but his cowardice and general meekness win out, because… what can he do?  It’s how he was written.

Just before the end of the film Dustfinger performs perhaps the most noble deed ever put down on paper, and if you blink you’ll miss it.  And, if he can do it…

Inkheart is convoluted, crazy, and possibly internally inconsistent, but if you say it like it’s a bad thing, you’re playing top trumps silliness against a fairy tale.  This, as though saying something like, “human hair could not withstand the weight of a person climbing it,” were a legitimate turn of discourse rather than becoming more foolish than thing itself.

At the very end, we are left with a lot of very strange questions.  How can you go back into a book and find yourself in that world and in a situation that clearly doesn’t happen in the book?  Does the book suddenly read differently?  How can the characters go on “existing” in this branch of happenstance that no longer has anything to do with the events of the book they’re in?

It doesn’t make a damn bit of sense.  Nothing magical does.

Own it on Blu-Ray, DVD, and On Demand June 23rd! Also – Inkheart available through iTunes here!

The Blu-Ray package is a nice one, but it isn’t exactly brimming with special features.   It includes the standard DVD disc of the film as well, which struck me as odd initially, but is actually rather useful to me.

There are nine additional scenes included, few of which make much difference to the end result.  One of them is an alternate opening sequence, and it is interesting to see how the film would have started with a very different feel to it.

Eliza Reads to Us has co-star Eliza Bennett reading one of her favorite passages in the book, which did not become part of the movie, and the reading is accompanied by illustrations by author Cornelia Funke.  It’s an interesting, if not meaty, addition which my child thought was just brilliant.

A Story from the Cast and Crew is a video montage of the story game played by just about everyone involved in the film.  Everyone picks up the story where the last person left off, and the result is rather a wild adventure.  Sort of a cute and harmless special feature, it’s probably something the younger viewers will find entertaining.

From Imagination to the Page: How Writers Write finds Cornelia Funke explaining the process of creating this and other stories, with a good deal of attention given to what sorts of things in life spark the imagination.

Below you’ll find the trailer and several other clips.