Transformers: Revenge Of The Fallen – Movie Review – Win the DVD!

Transformers: Revenge of the Fallen is one of those exceedingly rare movies that will cause a great stir in the film criticism community to no purpose whatsoever.  As well meticulously belabor the merits of Judge Judy, and its position on the spectrum of quality television.  On the other hand, once in a while a movie surfaces in just the right way, and makes you take a look at just what it is you’re supposed to be doing by delivering critique.  Ultimately, how different a game is being played when you visit Gosford Park vs. Transformers vs. (let’s say) Bad Boys 2?  Is there, in the final analysis, five-star fast food?

Revenge of the Fallen delivers us two years beyond the end of the first movie, and gives us to understand that the Autobots and the U.S. government have spent their time hunting down the remnants of the Decepticons.  Our hero Sam is largely out of that picture, except insofar as Bumblebee still lives with him.  He is also going off to college.  A short jaunt through this plot vehicle allows for relationship spins as Sam and Mikaela will attempt to continue their romance long-distance, even while wrangling with interpersonal roadblock “who will say I love you first.”

Back at the ranch, in a move that is much like a woman tripping in a horror film, a government suit wearing a sign that reads, “I am crunchy and taste good with ketchup,” throws his lack of weight around.  The government is apparently not very pleased with how the Autobots are handling their clean-up missions. 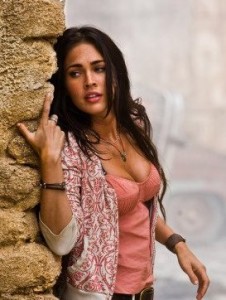 There are a lot of negative things I might point out about this film, but the question is really whether or not any of them serve a real purpose in being mentioned.  It seems to me that an overwhelming majority of them provide for only a solidifying of the initial viewpoint for those who were never going to see it anyway.  Those not moved to action, even theoretically, by the call of robots smashing each other (or hot shots of Megan Fox) are not enlightened by my detailing the myriad ways in which they will not enjoy this movie, and to work such an angle is to in some sense neuter myself.

There are a great many criticisms to make (which will be made by many) about Revenge of the Fallen which are to my mind more “by definition” than they are a true evaluation of the result, and I dismiss them all out of hand.

That said, the movie could shave a full hour off its 150-minute runtime and you’d never miss it.  Much of the humor is juvenile, but there is at least not that much of it.  There is, even for what it is, rather a lack of creative effort, and that was not so much the case in first film.  There is also the continuation, and worsening, of the fairly irritating feeling that Michael Bay never saw a Transformer before getting involved with the movies.  If the little toy cars, trucks, and planes transformed into the bizarrely complex monstrosities we see here, you’d never have heard of them in the first place.  It makes for a nagging disconnect when you’re trying to give yourself over to a movie, and can’t figure out what the hell you’re looking at.  Three robots fighting each other become one giant mass of wriggling metal with no discernible point at which one begins and the other ends, and I concede the point of visual masturbation to the nay-sayers.

The problem is that I had fun.  So did at least the vast majority of people in the theater with me.  I even laughed… out loud… twice.  I had to really think about that, because I don’t… ever.  Sure, there’s a lot of mindless humor, but it’s a sort of innocuous mindlessness.  Even the twins seem to me mostly harmless, because they appear actually to be referencing less than intelligent people in general, and I don’t know that they’ve become a class we aren’t allowed to mock yet.  But, I laughed at John Turturro, who was a nice balance, and (God help me) at a certain taser incident, which I suppose I can claim caught me off guard.

I can’t give it a higher rating, because someone with directing sensibilities beyond wondering at which point he gets to spin the camera around people’s heads until the audience gets dizzy might have been in charge, and there would have been a much better version to deal with.  There might have been some character development, and we might have explored our plot instead of just running full sprint through it as though we feared someone might notice how cursory our 2+ hour exposition really is.

I can’t give it a lower rating, because if it fooled you, you deserve to be fooled.  I can’t find a way to argue against claims that the movie is stupid, not because I can’t put them together, but because I can’t be bothered to put them forward.  I’m not afraid to go one better and have done, because the thing is conceptually stupid.  I see your “here’s why it’s stupid,” and raise you, “I knew it was stupid before I started watching it.”  The key is that, unlike something like Bad Boys 2, I didn’t get the impression that the film was calling me stupid.

I can’t get past the fact that I had fun.  I could have had more fun, and it’s goofy, guilty pleasure fun, but it’s still fun.  There is five-star fast food, this just isn’t quite it, but it isn’t that bad either.

I do feel obligated to mention that Michael Bay should not direct films.  There are no films which owe any of their positive qualities to Bay’s direction, and few that have many besides.

Leave a comment on this review, and you are entered to win the standard version DVD upon release.  The winner will be randomly selected on the day the DVD releases.