Among the worst things to ever happen on television are those episodes of legal shows such as Law & Order which dole out the most bizarre bastardizations of the law and laughably demonize someone in the legal system as supporter of whatever oddball viewpoint fits the bill. 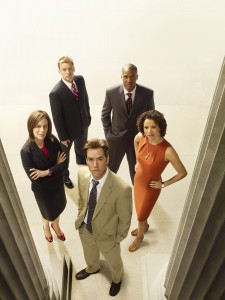 The stage is set by looking at a law that is perhaps somewhat goofy in its normal application, and cranking things up a notch by trying to apply it in a ludicrous circumstance.  At some point a defense attorney will say, “But, you know he’s innocent,” and the prosecutor will twirl his mustache and cackle wildly.  Either that, or Mr. Ididit McGuilty is about to get off on some technicality despite the fact that we found 40 bodies in his house, and he was chopping someone up when the police arrived.  The prosecutor will struggle mightily with his frustration and lament the legal system while the defense attorney does a little happy dance and sings, “Uh huh… It’s my birthday.”

If none of that works out, then we’ll throw in a judge who works generally from the theory, “If they aren’t guilty, how did they get accused?”

We play up the controversial mainly because then the show doesn’t really have to be that good anymore.  Audiences get wrapped up in who is, or isn’t, a complete bastard, or which guy should be stoned, nevermind in jail, and most everything else falls to the unnoticed periphery.  Is this plotline ludicrous?  Are these characters at all believable or interesting?  Such little whispers are drowned out by the chanting.

These episodes pop up every now and again on just about every legal show.  Audiences get to sort of blow off steam, and everyone connected with the show gets  something like a working vacation.  Everything is set out in the simplest terms, and you’re invested in the characters already, so it isn’t really a big deal. 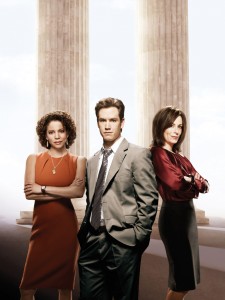 What if there were a whole show, not only dedicated exclusively to such a theory, but vehemently proud of the fact?  Well, there is.  It’s called Raising the Bar, a title which seems only able to convey a negative connotation.  Oh, we’re raising the bar alright.

The show stars Zack from Saved by the Bell!, the mom from Malcolm in the Middle, and Jeanie from ER.  These are characters played by actual people with real names, but this is a show that doesn’t care.  It’s a show that just wants you to say, “Ooo, I loved her on Malcolm!” or, “Oh my God, Zack!”  When Zack showed up on Late Night with Jimmy Fallon (which was hilarious), it wasn’t that much of a stretch really.

The first season started out with a bit of hope for something that could, if nothing else, maintain itself as a workable guilty pleasure.  There’s always a market for these younger-ish lawyer shows, and if it isn’t Private Practice (woops, The Practice)or Ally McBeal, well, it’s going to be something.

The grating irritant of the show that needed to find a way to work itself out was that the prosecutors all wore black hats, and not only cackled, but howled at the moon besides.  Well, this new evidence does make it look like he’s probably innnocent… tell you what, I’ll offer you a deal and he’ll only have to spend ten years in jail… hey, don’t complain to me, your job is to get them off no matter what, and my job is to convict them.  Only, that’s not actually a prosecutor’s job.

The show plays it out in a silly enough fashion to begin with, and while I had hopes that the second season was turning things around a bit, it was recently thrown at the audience with so much fanfare there were practically fireworks.  Taken to task for putting forward the theory that, basically, any parent who puts any picture of their child (of any age) naked on the internet, under any circumstances, should do a nickel and have to register as a sex offender, the prosecutor defends his position with all the moral outrage of someone making a statement like, “What are you talking about?  Of course I don’t think we should eat babies.”

There’s an audience out there I suppose, and the show spins a somewhat decent (if largely annoying) guilty pleasure angle, but I’ll pass.  I have enough trouble when a show is shouting, “Meat is Murder,” at me, because I rather believe that trying to get fans by way of in-group bias is to have given up before you start.  When a show starts taking its polarizing extremes of viewpoint so far that it starts shouting, “Human Meat is Murder,” I can’t figure out how to care.