Released on DVD July 7th, 2009, Nursery University is easily one of my favorite documentaries that falls squarely in the “disturbing and fascinating” category.  Residing at the top spot of that category (especially among fairly recent films) is Capturing the Friedmans, which is more disturbing, but Nursery University can get a little creepy at times as well. 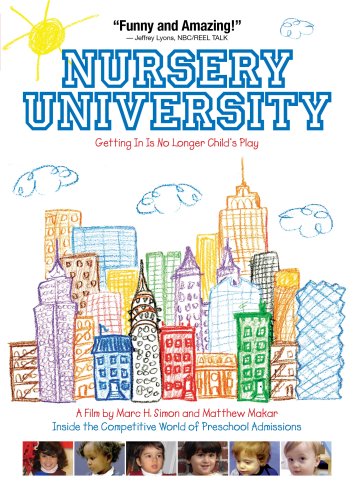 The film focuses on the insane world of New York preschools, and the lengths parents will go to in order to secure the right spot for their children.  That not only includes paying $20,000 per year or more, speed-dial “phone-a-thon” just to secure an application, and an interview process more demanding than a lot of University admissions, but also a stock pricing scandal.

A recent baby boom has raised the number of children in New York City 30% since 2000, and the nursery school system is now looking at something like 15-20 applicants for each available spot.  The result is to spin an already out of control situation to the absolute breaking point of realities’ confines.  Placement lotteries, expensive admission consultants, and parents seeking guidance from counselors because their child didn’t get into a certain school are just the tip of the iceberg.

The film follows five families through the year-long process of trying to secure the little ankle-biters’ futures, and as the trail of tears goes on, some of the parents break down while others get a bit of a reality check.  It’s a little bit Spellbound, a little bit Little Miss Perfect, vaguely related to The Nanny Diaries, and all hard to believe. 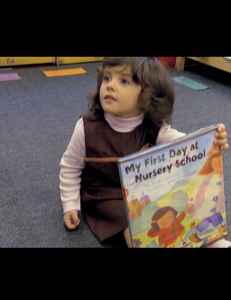 It puts together a lot of pieces, and manages to keep the whole product marvelously entertaining, and I would hardly have believed it.  While the general idea is straight-forward, we get a lot of angles, and things are not as simple as we might guess.  From wealthy parents who are just too much to stand, much less believe, to kids caught in a crazy worldview, to the simple facts of supply and demand making themselves known, Nursery University tackles the complete story.

Nursery University is brought to you by director/producer/writer Marc H. Simon, and co-director/producer Matthew Makar.  Simon wrote and produced After Innocence, which won the Special Jury Award at Sundance 2005.  Makar co-directed and produced Yellow Brick Road.  The pair make for a solid and interesting team, and it shows.

As much as the theory is aimed directly at a plethora of people who are not me, the film undeniably delivers interest and entertainment.  It seems like a journey into the depths of something without any, but some of the parents are fairly legitimately just trying to figure out what they’re supposed to do.

The DVD also includes some great special features.  The commentary track by the film’s creators is as on target as the film in general for delivering just the sort of information that adds value to a strange and unique story.  There are also two Q&A sessions with the filmmakers, parents, and admission officers.  There are some deleted scenes, but their only real interest is that some of them are rather amusing.  Rounding things out is a curious feature, “Tips from the Experts: Advice for Getting Into Nursery School,” which seems a lot like having a “How to Become a Cheerleader,” featurette tied to Bring It On.

Thanks to the people at New Video, I am giving away two iTunes downloads of the film.  Just leave a comment, and you’re automatically entered to win.  You must be a U.S. Resident to win, and will have to have an iTunes account to redeem the prize.  Winner will be chosen randomly on August 14th.