The Mighty Boosh just isn’t for everyone.  I think you’ve really got to start there.  While there is something about The Mighty Boosh that is reminiscent of the style and/or theory behind some classic British/UK television, you’ve got to get your mind aiming toward things like The Young Ones and go from there.  On the other hand, there is a good portion of newer craziness that isn’t all that far off.  Things like Little Britain or Dead Ringers. 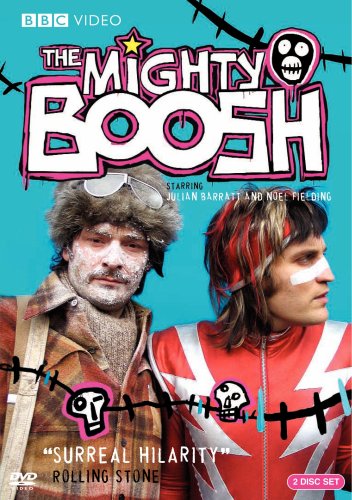 The Mighty Boosh is the creation of Noel Fielding and Julian Barratt.  Starting as a stage show, then moving to a radio series, and finally a television show, The Mighty Boosh is an absolutely bizarre mix of seemingly random, psychedelic humor.  Our two characters are Vince Noir and Howard Moon, basically a couple of likable losers, who fall prey to the craziest circumstances.

The first series finds the pair as employees of the world’s worst zoo, Bob Fossil’s Funworld (later known as The Zooniverse).  Not only does the zoo have an absolutely amazing shortage of animals, owner Fossil hasn’t even a rudimentary knowledge of animals.  The pair have to cope with boxing a kangaroo (a mad, slavering killer of a kangaroo at that), a plot to fuse animals and people into new creations, and further outrageousnesses (?) too numerous to mention.

While the style of show is somewhere in the same realm as The Young Ones or Little Britain, it stands apart by being such a calm stroll through the lunacy.  Where other shows run frantically, The Mighty Boosh barely manages to get up off the couch.  Unless they’re singing (and they are somewhat frequently).  Then it’s a mad show.

The first series DVD includes several special features, including commentary tracks by Noel and Julian on several episodes.  Outtakes and a picture gallery are available, as well as featurettes – Inside the Zooniverse and History of the Boosh.  The commentary tracks alone are worth the price of the DVDs, as they are often even funnier than the show. 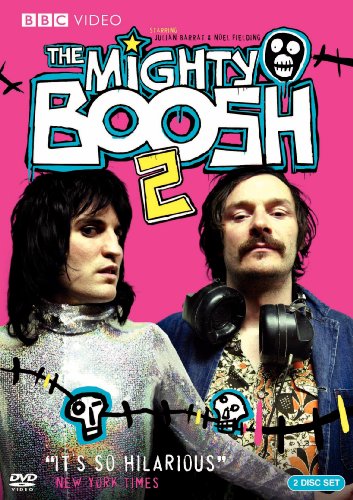 The second series abandons the zoo and begins in front of the pair’s flat, but that is only the jumping off point for adventures that span the globe, and unto the further reaches of the universe.  From jaunts with Yetis to explorations of other planets, the second series takes things to new levels.  With trusty shaman mate Naboo in tow, our mighty duo of supreme averagosity embark on adventures that would test the courage and color palette of the fiercest of sideshow half-man/half-peacock freaks.

The second series DVD is also loaded with special features.  Commentary is available on all six episodes.  Again, these are brilliantly funny tracks that will be a definite treat for fans.  It also includes outtakes, deleted scenes, and a photo gallery, as well as the Boosh Pilot, a great “making of” featurette, and more.

Now, when we get to series three, things get a little weird.  We now find the boys working in the Nabootique, a seemingly normal second-hand store which is actually something of a front for many a various and nefarious shaman-related deed. 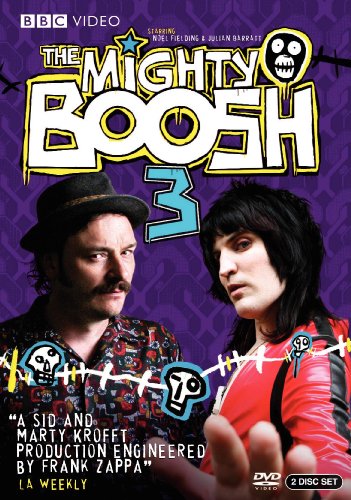 Vince and Howard are sucked into the wildest adventures yet, and no corner of time or space is safe (except, naturally, for just off to one side of 18th century Spain).

The third series DVD is again packed with great features.  Commentaries are again available, along with outtakes and deleted scenes.  There’s another “making of” effort, which is nicely put together, and a lot more.

Following numerous awards and mountains of critical acclaim  for both the stage and television shows, and airings on Adult Swim, the DVD releases are really the breakthrough to American audiences.

It’s a little insane, a little cosmic roadtrip, and rather brilliantly funny… but the odd version.  I have to recommend it, because it’s hilarious, but it is the sort of thing you have to be cautious about.  Many will not take to this, but many people don’t like Monty Python, so what are you going to do? 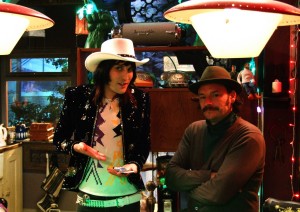 Check out a couple of interview clips below.

Own all three series on DVD today!