Pushing Daisies is the most unfortunate sort of victim of the attention to ratings, but the DVD release will hopefully let it live on.  Although it lasted through two seasons, it was still (ha ha) killed off ridiculously early. 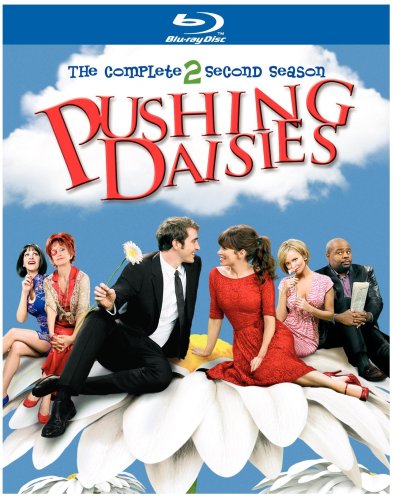 The first season won over critics, and was nominated for (no exaggeration) just about everything possible, including 12 Emmy noms with three wins.  The quirky, fabulously original show was riding just about as high as possible.  Perhaps a victim of the writer’s strike to a degree, by the second season ABC did not seem particularly interested in the show.  There were reports by late October that ABC had told the show’s producer to make the last episode of the season into a series finale.  Ultimately, the show was taken off without even airing the last three episodes, which were finally broadcast half-a-year later.

For the uninitiated, the show follows main character Ned (Lee Pace), who has the unique ability of bringing the dead back to life.  This power is very specific in its application though.  If Ned touches those brought back to life again, they die again, for good.  Also, if Ned does not return them to death within a minute, some hapless nearby living person will drop dead in their place.

Two events lead us into the show.  At some point a P.I., Emerson Cod (Chi McBride), learned Ned’s secret and devised the scheme of using Ned to “wake” murder victims in order to help solve the crimes.  Next throw in Ned’s childhood sweetheart, Charlotte “Chuck” Charles (Anna Friel) being murdered.  Ned brings her back, but can’t bring himself to put her back to death.  The funeral director kicks, and now Ned has his love interest, but he can never touch her.

The show was often described using words and phrases like: fairy tale, charming, and innovative, not to mention the many more general superlatives.  Perhaps most intriguing in terms of the general regard for the show is the number of times I heard people say, “I don’t even like it, but I really hope it gets at least another season or two.”  While you would naturally hope to hear people voicing something more directly positive about your show, that’s awfully high praise if you give it a second or two to sink in.  How many shows can you say that about?  Maybe you don’t particularly find it your cup of tea, but you can appreciate something about its existence, and hope that it will continue.  Not bloody many. 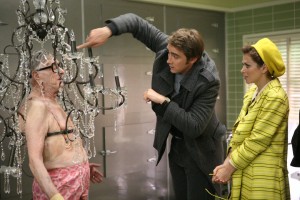 Like Bryan Fuller‘s other creations, Dead Like Me and Wonderfalls (also of very short runs), Pushing Daisies aims at creating not just a new show, but a unique idea of what a show can do or be.  The show is in some sense not only another experience of television, but another kind of experience of television.  That is not to say that such an effort is automatically a good thing, but in this case it certainly is.

The second season tried to work out some of the long-term angles raised in the first season, but things were probably made somewhat too complex for new recruits.  Put together with the fact that the writer’s strike meant it was somewhere around a year since a new episode had aired, and there may have been little chance for the second season to support itself in the world of ratings demands.

Still, the second season broadens the narrative to a good degree, featured many great guest stars, and showed that the series actually had some serious legs, and could have performed well for years to come.  At the top of the list of imaginative, creative, and wonderful shows that have come along in the last decade, Pushing Daisies is yet another piece of evidence in the case against so much attention to rating battles.  How much award recognition do you have to get before you’re at least allowed to make it through your second season uninterrupted?  How many favorites have to get knocked off before people aren’t willing to try new things, except on cable networks, and the major networks turn into nothing but long lists of reality shows, and late night talk shows move into primetime slots… 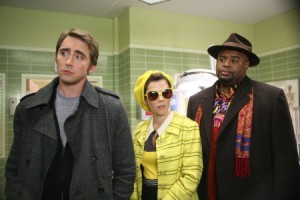 The second season DVD is obviously recommended.  If you haven’t taken a ride with this show yet, I could not more strongly suggest you do so.  Moreover, the show is a must own, and few are the members of that list for me.  Further still, the show is a treat on Blu-Ray, with its over-the-top visuals and fanciful color scheme, it is well worth getting the fullest experience.

The DVD Release comes with four special features, each interesting in their own way, but perhaps the sort of efforts that will leave fans wishing there was a bit more to them.  The Master Pie Maker: Inside the Mind of Creator Bryan Fuller gives a look at the general creation of the show which certainly serves the purpose, but might have been a bit more meaty.  From Oven to Table: Crafting a Script into Reality is quite interesting actually, but felt as though it was opening a lot of doors it could have walked through without covering things in the sort of detail fans will likely want.  Secret Sweet Ingredients: Spotlight on Composer Jim Dooley’s Work is probably the most solidly put together of the features, and gives a nice look into the show’s musical world.  Add a Little Magic: Executing Some Giant-Sized Visual Effects is a nice look into creating effects for television vs. the featurettes you might get on film releases, but it again leaves you wanting more.  In this case, that might actually be a result of the fact that the feature is quite interesting.

This is a really solid release overall, and one of few television shows that I would say the Blu-Ray is a completely justified way to go in terms of the content of the show itself.

Please check out several clips below to get yourself in the mood.

Own it on Blu-Ray and DVD Today!