As the name implies, Green Lantern: First Flight is the story of Hal Jordan’s beginnings as a member of The Green Lantern Corps.  As the movie opens, an alien lies mortally wounded, and tells his Green Lantern ring to simply, “Find him.”  Hal Jordan, currently working a flight simulation, finds himself sucked to the alien’s side by a mysterious, magical force, as the ring itself chooses him as its next bearer.

With the ring on his finger, Hal is suddenly transformed into a member of The Green Lantern Corps, and learns the universe is a lot bigger than he suspected.  More Green Lanterns soon show up to take Hal to The Guardians, who must approve his membership.  They are not convinced that a human is capable of joining what is basically the Universe’s police force.

An elite member of the Lanterns, Sinestro, offers to take Hal under his wing, and see how he performs.  Sinestro takes Hal along on a mission to capture the criminal believed to have killed the Lantern whose ring Hal now wears.  We soon discover that things are not what they seem, and Hal finds himself thrown into the middle of a power struggle which could turn the entire Universe upside-down.

With a well-deserved PG-13 rating, this is a movie that approaches things from a slightly different angle than viewers might expect.  Not that things are overdone really, but there are a few moments that merit the warning of the rating.

Green Lantern: First Flight pulls together a lot of elements, and really makes the effort to move into the arena of a true movie as opposed to simply an elongated episode.  I’m not sure it actually gets there, but it’s a solid effort.  From side angles like Hal’s fellow Lanterns not being particularly welcoming to him, to a more diverse range of mood and atmosphere, the theory is clearly much more in line with a cinematic attempt. 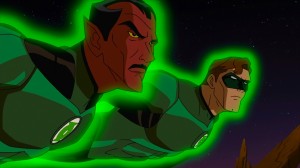 The cast and crew are impressive, and the voice talents stand out as worthy performances.  From the press release – 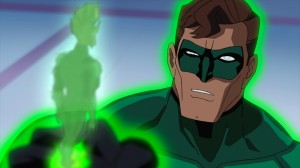 The DVD release has almost too many features to deal with effectively.  The 2-Disc set comes with a code to download a digital copy, and is simply loaded with bonuses.

First Look at Superman/Batman: Public Enemies lays out the next feature will be coming, including storyboards, clips, and interviews with several members of the cast and crew.  Tim Daly, who voices Superman, is around for several clips, and talks about portraying the man of steel.

From Graphic Novel to Original Animated Movie – Justice League: The New Frontier is a similar look into the creation and background of that title.  At about 11 minutes, it gives a nice look, and also includes clips and interview footage.

Wonder Woman: The Amazon Princess is another similar feature which explores not only the creation of the animated adventure, but the entire history of the character. 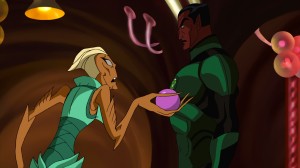 Batman: Gothic Knight – An Anime Evolution gives a lot of interview footage from a wide array of those involved with creating the updates of the character, and looks at many aspects of updating the character.

Blackest Night: Inside the DC Comics Event is just what it sounds like, and includes a lot of interviews.

Disc 2 kicks off with Green Lantern: Behind the Storywith Geoff Johns, and although it might have been longer than ten minutes, is a pretty interesting exploration of the character.

We also get the 22 minute, wonderful, Duck Dodgers “The Green Loontern,” which is a brilliant bonus. 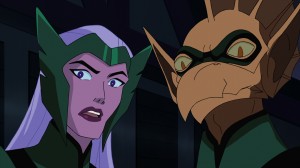 Rounding things out are two background pieces that give a detailed look at Sinestro and The Guardians of the Universe.

But wait, Bruce Timm’s also introduces two double-secret-bonus cartoons – The two part episode of Justice League Unlimited – Once and Future Thing, which finds several members of The Justice League going through time and joining up with Jonah Hex and others.  It’s also a great addition to the set.

Put it all together, and the DVD set includes some three hours of bonuses.

The movie is quite good, and the DVD release is a quality showcasing that will leave fans and newcomers alike happy.  Check out a clip and links below.